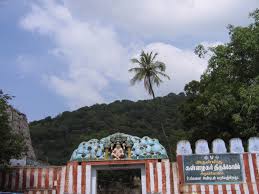 In the third pAsuram – AzhwAr says “one should consider ayan malai (nearby hill) which is part of thirumalai as the goal”.

Subsequently, AzhwAr says “To desire for the hill nearby thirumalai where the most generous emperumAn resides, is the goal”.

Third pAsuram. AzhwAr says “Do we need all these goals? The hill nearby thirumalai itself can be considered as the goal”.

nenjE – Oh my heart!
payanalla – useless actions
seydhu – performing
payan – use
illai – no
puyal – drizzles and drops
mazhai – like a black cloud
vaNNar – one who is like cloud that showers rain without discriminating between land and water (sea)
purindhu – being friendly
uRai – residing eternally
kOyil – abode
mayal migu – that place which captivates the one who sees
pozhil – garden
sUzh – surrounded by
mAlirunjOlai – in thirumalai
ayal – nearby
malai – mountain
adaivadhu adhuvE – reaching it alone exclusively
karumam – it is natural activity – must be done.