In the previous pAsuram, amudhanAr said that after emperumAnAr accepted him, emperumAnAr‘s auspicious qualities are his life saver, nourishment, and enjoyment. In this pAsuram, he goes beyond that and says that each and every previous state (before they surrendered to emperumAnAr) of the great and distinguished disciples who serve none other than emperumAnAr – such states themselves would make me their servant.

In the previous pAsuram he talked about how after emperumAnAr who like the cloud having such kindness, had gotten him, and after that his qualities were his life support; in this pAsuram – he says – the birth, nature of living etc., of the disciples who serve no one other than emperumAnAr, would each by itself would make me their servant.

en sey vinaiyAm – as said in ‘dhvishantha:pApakruthyAm’, the karmas I am talking about are not attained or assumed from others, but are based on my own actions;
meykkuRRam neekki – emperumAnAr removed those karmas that were ever present; and
due to the happiness that “we (emperumAnAr) got to remove his (amudhanAr‘s) obstacles”,
viLangiya mEgaththai – he is being bright, who is an extremely generous cloud;
dhikku uRRa – pervading in all directions
keerththi – having fame due to his qualities,
irAmAnusanai – emperumAnAr,
mEvum – as said in ‘rAmAnuja padhachchAyA’, being like the inseparable shadow of his feet,
nallOr – such distinguished disciples
ekkuRRavALar – who may be having any kind of blemish,
edhu piRappu –  who may be born in any level of birth,
Edhu iyalvAga – who may be having any level of practice (vruththi – anushtAnam)
ninROr – that they might have been (before getting the connection of emperumAnAr);
akkuRRam – those blemishes,
appiRappu – those level of births,
avviyalvE  – and those levels of religious practices themselves,
nammai – we who have got the following noble thought – that their having such low level births etc., are something they took up upon themselves to show us that we who are of such low states in real are also eligible to reach emperumAnAr’s divine feet;
AtkoLLum – every time we think in that way (such reason for their low level of birth, etc.), that would make us subservient to them;

(In summary), only if we see them in this light, our thought that we are equal to them would be destroyed (and we would understand that they are higher than Isvaran and we are of very low state).

That is, ‘we’ who are deeply in devotion towards them;

Or, ‘ekkuuRRam, edhu piRappu, Edhu iyalvAga ninROr’ is said regarding those great disciples themselves: after they got the realization that their higher level of birth etc., lead to ahankAram, but now in their current (low) birth etc., they have realized that such thinking earlier were the obstacles, and are happy that they would not get such thought having been born in low status, etc., and that such state would help them reach emperumAnAr;  amudhanAr says that such current states of them itself made me their servant (because their current state would lead to emperumAnAr’s divine feet).

mey kuRRam  – my karmas that stay true and well set; well set means that it cannot be gotten rid of by penances or amends (such severe karmas).

en sey vinaiyAm meyk kuRRam neekki – is – due to karmas I got the body; due to that the blemishes of ahankAram, etc. – he removed such karmas. vinaiyAm -> due to my deeds;

Since it is mentioned together with birth and religious practices (anushtAnam), ‘ekkuRRam’ (the blemishes) is about the blemishes in knowledge (gyAnam).

en sey vinaiyAm –  as said in ‘dhvishantha:pApakruthyAm’, these karmas are not gotten from others, but these karmas are due to my doing the prohibited, etc., and which cannot be rectified by amends (prAyaSchiththam); my karmas are as said in ‘nAbhuktham ksheeyathE karma kalpa kOti sathairapi (~ for how much ever crores of years you experience the fruits of your karmas, they would not diminish)

and so amudhanAr says with conviction (about his blemishes).

mey -> ever present, well set karmas.  That is, it cannot be rectified by experiencing its fruits or by doing amends (anubhava vinASyam or prAyaSchiththa vinASyam).

As said in ‘vAno maRi kadalO mAruthamO theeyakamO, kAnO orungiRRuk kaNdilamAl [periya thiruvanthAdhi – 54]’ ((after surrendering to emperumAn) I am not able to locate my karmas. Have they vanished in to space? Or in to the sea of driving waves? Or in to the air? Or fire? Or forest? I don’t know where they have vanished into), emperumAnAr completely removed it without trace.

viLangiya – and due to that he (emperumAnAr) looks very bright; you see, since he thinks that it is great that we got to remove his (amudhanAr’s) obstacles, he is looking very bright.

As said by ‘thikkuRRa keerththi’, and, ‘Eyndha perum keerththi’, he is having such auspicious qualities who fame has spread in all eight directions.

nallOr – (by the noble ones); like said in ‘nanmaiyAl mikka nAn maRaiyALargaL [kaNNinuN chiruththAmbu – 4] (those who are superior, the vaidhikas who are well versed in all the four vEdhas), the noble ones who do not seek any other benefit;   or, ‘mEvum nallOr’ – like saying ‘rAmAnuja padhachchAyA’, the distinguished ones who are inseparable from emperumAnAr like the shadow of the divine feet;

akkuRRam appiRappu avviyalvE – since such blemishes etc., are present before surrendering to emperumAnAr, and since they surrendered with such a body only,  they are noble ones who can be said as ‘siRu mAmanisar [thiruvAimozhi 8.10.3]’ (~small in body and big in nobility), their blemishes etc., themselves shall –

nammai AtkoLLumE – take me as their property that they can purchase or sell.

nammai AtkoLLumE –  such noble ones like them have taken up blemished knowledge, lower/upper births,  blemished anushtAnam, etc., to show us that we who are like that are also eligible to surrender to emperumAnAr like they did – we are thinking of them in this way, and so we are amicable to be taken up by them as their property.

By ‘Adhi dhEvan’ it might look to mean the prathama AchAryan, that is, emperumAn; but since emperumAnAr advised us that that sarvESvaran is the desired one, it is acceptable to use the phrase Adhi dhEvan to imply emperumAnAr.

Even though there are no blemishes in a gem or a mirror, the blemishes in us/things in front of them would be reflected on them and they would appear to be having such blemishes; in the same way some people would project their own blemishes on the pure noble ones and mistake it to be their blemishes; even if they are such blemishes it is all acceptable to us;

Or, even if those noble ones have got some blemishes due to their connection with their material body, as said in ‘padhma pathram ivAmbhasA’ (water on the lotus leaves), they would stay aloof from such blemishes; even if such blemishes are attached to them, those blemishes would be the cause for them to accept us who have got such blemishes (because they have experienced the pains of such blemishes).

As said in ‘yasmin mlEchchEbhi varthathE – thasmai dhEyam thathOgrAhyam sacha pUjyOyathAhyaham [gAruda purANam]’, even if one is from the lowest birth, if he has got devotion towards me then he is noble and is worthy of worship and others can learn the true knowledge from his, is what is said in the purANam.

As said in ‘apichEth sudhurAchArO bhajathE mAm ananya bhAk | sAdhurEva samanthavya: samyak vyavahithOhisa:’ [SrI bhagavath gIthA]’  (~ even so, whatever is the fully bad conduct of him, if he worships only me who am here in the chariot,  consider him as honorable) ; by this, whatever may be the wrong of them, if they are devoted only to me, then those blemishes are small, and considering their surrendering to me as the main aspect, they are to be worshiped.

nammAzhvAr too said in his many decads,

‘sirumAmanisarAy ennai ANdAr ingE thiriyavE [thiruvAimozhi – 8.10.3]’ (~ when those devotees of emperumAn, who are small in form but great in nobility are available in this world, would it fit me to try to reach emperumAn‘s divine feet instead of serving those devotees in this world?), and 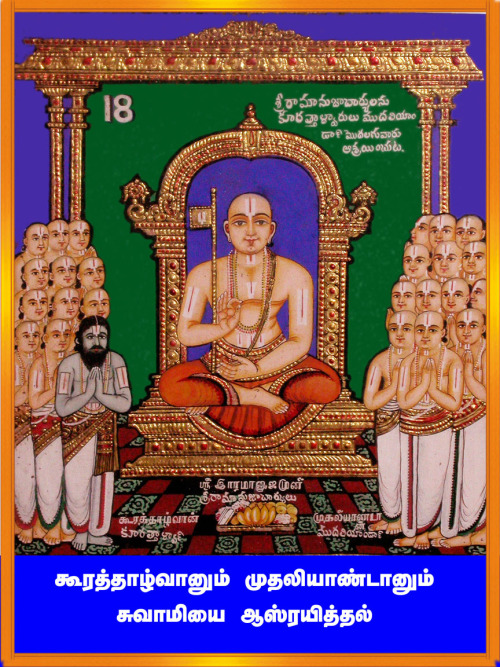 SrI bharathvAja mahAmuni too said, ‘prathyakshith Athma nAthAnAm naishAchinthyam kulAdhikam’ (~~without seeing the devotees’ blemishes as such, one should consider them as good for us).

Now, if it is said that the bad deeds are done not just because of connection with the material body, but are knowingly done – since it is said in ‘dheepUrvoththarapApmanAmajananAth’, and in ‘puNyaththukku anjugiravan pApaththaip paNNAniRE [SrIvachana bhUshaNam – 279]’ (one who is afraid to do good deeds itself (because any remainder in that would put him in this material world), would not do bad deeds at all), there is no way that they (who worship only emperumAnAr) would knowingly do such deeds;  as said in ‘jAthEpi’, even if it is said that one might knowingly do bad deeds due to connection with this material world, but since emperumAn thinks ‘en adiyAr adhu seyyAr, seydhArEL nanRu seydhAr [periyAzhvAr thirumozhi – 4.9.2]’ (my devotees would not do such mistakes; even if the did (due to forgetting themselves in their service), it would be all for good only), and as said in ‘vAthsalya jaladhE’ since His nature is to consider the blemishes of his devotees as enjoyable for Him, and as said in ‘iRaiyum – agalakillEn [thiruvAimozhi 6.10.10]’ (would never leave), since thAyAr always stays together with him and recommends to emperumAn to tolerate the bad deeds of devotees, the bad deeds which He could forgive just based on our anjali (showing reverence by joining the palm of the hands).

geethAchAryan also said ‘sarva pApEbhyO mOkshayishyAmi  [Sri bhagavath gIthA]’ (~ would forgive your bad deeds and give you liberation), and ALavandhAr said ‘thadhaivamushNAthyasubhAnya SEshatha: ’ (how much ever inauspiciousness are present in him, he is separated from them and liberated), the ‘sarva’ (everything) would also include those bad deeds one knowingly performed (due to connection with this material body) after doing SaraNAgathi as well;

even though sarvESvaran accepts him in spite of our blemishes,  prapannas should be very careful not to cause bad name for Him (that He accepts his devotees even though they are having bad deeds).

since such greatness is present in emperumAnAr’s devotees,  one should not disrespect them based on their blemishes, but instead should go with the thought that they our our masters.

only if we see them in this light, our thought that we are equal to them would be destroyed (and we would understand that they are higher than ISvaran and we are of very low state).

Like said in ‘vamsa bhUmigaLai udhdharikka keezhkkulam pukka varAha gOpalaraip pOlE ivarum nimagnarai uyarththa thAzha izhindhAr [AchArya hrudhayam – 1.84]’; like how Krishnan and varAhan had incarnated in lowly form to uplift yAdhavas and the earth respectively, those who are inseparable from emperumAnAr have also incarnated in lower births etc., to save the samsAris. Like how krishNan pretended to be ignorant of hiding his thefts of butter, dancing with gOpikAs, having lowly activities etc.,  these noble ones are also pretending to be of low knowledge and deeds; like varAhap perumAL they are also taking up lowly births, etc.

Due to his affection, their blemishes the size of hill also is considered as their good characteristics.

Now, instead of thinking that amudhanAr is talking about their lowly births etc., consider that he talks about their being born in higher births, higher knowledge, and higher actions; they thought that due to these we gained a lot of ahankAram, and so they feel terrible for giving room for such ahankAram; to such state of them amudhanAr is being drawn towards and become their devotees.