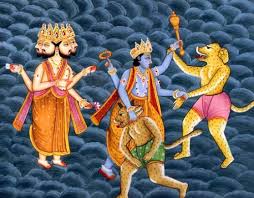 In the sixth pAsuram – AzhwAr says “emperumAn out of his compassion worked hard, for a long time, to develop my devotion towards him”.

Subsequently, AzhwAr explains emperumAn‘s binding to his compassion which is the trigger for the favours done by him, which caused him this great splendour.

Saying “I don’t have any goal other than madhusUdhanan (who removed my obstacles)” without any expectation for any results, I sing and dance covering his countless qualities in the form of sthOthrams (praises); to transform me to such state, he took many many distinct/unique births in kalpa (day of brahmA) after kalpa, assuming different forms to do different tricks to become friendly with me; such lord thrivikrama of mine who positioned himself to favour me exclusively, became overwhelmed/wrapped with mercy in the form of unavoidable destiny.

What is the difference between us who say the same thing when our mind is in sathva guNam (goodness) and AhwAr?

When asked “what is the reason for his favours?”, AzhwAr says “vidhi sUzhndhadhAl” (because he was wrapped with compassion):