Once upon a time some of the dhEvathAs had fought with emperumAn (in support of asura bANa/vANan) and after understanding His greatness had praised Him, and so sarvESvaran had pardoned bANAsura’s mistake; emperumAnAr who praises that emperumAn is my emergency fund, says amudhanAr.

bANa, a big asura by his hard penances had attracted rudhran and had kept rudhran in his entrance (as protector), and at that time, in the matter regarding his daughter ushA he had imprisoned anirudhdhan (grandson of krishNan), and so krishNan upon hearing this had come to battle him out, and rudhran came with all his people and fought a big battle with krishNan and after losing he understood the greatness of krishNan and praised Him; and krishNan for their sake forgave pANan; emperumAnAr who worships that krishNan is my storage of wealth for emergency, says amudhanAr.

kArththikaiyAnum – subrahmaNyan who is called kArthikEyan due to connection of kruththikA star
kari mukaththAnum – and gaNapathy who is of elephant face
kanalum – and agni the fire deity that came as a help to them
mukkaN mUrththiyum – and rudhran who is in the form of having three eyes
mOdiyum – and dhurgai
veppum – and other deities related to fever, etc.,
mudhugittu – as said in ‘muNdan neeran makkaL veppumOdiyangi Odida [thiruchchandha viruththam – 71]’ (rudhran and his people and other dhEvathAs ran away), they ran away showing their back, and then as said in ‘krishNa krishNa mahA bahO jAnEthvAm purushOththamam’, after they understood that He is the sarvEsvaran of –
mUvulagum – the round worlds of three types kruthakam, akruthakam, and kruthakAkruthakam
pUththavanE enRu – praised Him saying you who created us from your divine flower like navel , thereby they stood there indicating their relationship as father-son, etc.,  and for the protection of the asura vANan,
pORRida – sang praises on Him
vANan pizhai poRuththa – (krishNan then) pardoned the mistakes of bANAsuran
theerththanai – such sarvESvaran of pure qualities;
irAmAnusan – emperumAnAr
Eththum – who praises Him having lost to such qualities of Him,
enthan sEma vaippu – (such emperumAnAr) is my companion wealth that is saved for emergencies.
vyAkyAnam

kArththikaiyAnum, etc. – Grandson of prahlAdhan and son of mAhAbali, is bANa, a big asura; he performed hard penances and made rudhran appear and attracted him, and requested him, ‘you stay near the entrance of my place and help me win all the worlds’; rudhran promised to him saying ‘ I will come here with my wife and children and protect like even the flower in the head to not wither’, and so came and stayed near the entrance;

at that time, bANa’s virgin daughter ushA being of unparalleled beauty was presented with a palace for her enjoyment; she with a lot of servant maids lived there, and when she reached the stage of determining the right groom for her, called one of her girl friends (named chithralEkA) who knows magic etc., and asked her to draw the paintings of all the princes in the earth, and she too drew them and presented to ushA; 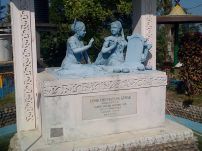 ushA asking her friend to draw (statue in agnigarh, Assam)

after going through all those paintings, she saw the one who lives in dhvArakA, who is the grandson of krishNan, and son of pradhyumnan, that is, anirudhdhAzhvAn, and decided to marry him, and with great love prayed to her friend about it, and she who was born in asura clan and knew mAyA, fooled everyone in dhvArakA and brought anirudhdhAzhvAn and kept him in ushA’s palace; ushA and anirudhdhAzhvAn concurred with each other and married in gandharva way and were enjoying each other; 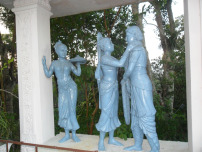 bANa came to know this, with his crooked mind, captured anirudhdhAzhvAn and imprisoned him;  krishNan came to know about this incident and got angry at bANa and so came with his army to fight him;

rudhran who was at the entrance fought krishNan and lost, and then praised Him – these stories are popular from bhAgavatham, hari vamSam, etc. 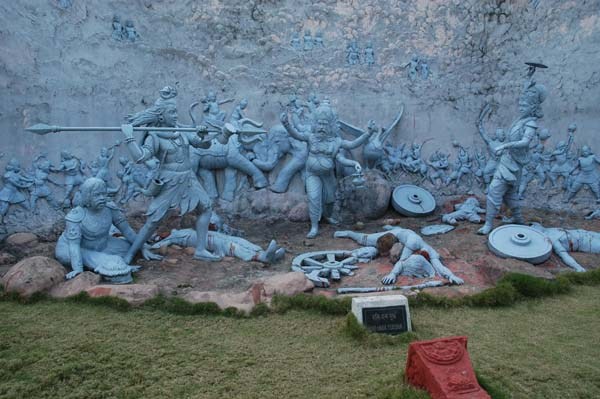 krishNan fighting with others (statue in agnigarh, Assam)

He (amudhanAr) is divining this pAsuram through that incident.

kari mukaththAnum – and when rudhran destroyed the sacrificial offering (yAgam) of dhakshan, the ones present there had cut off this individual’s head, and all types of dhEvas came together and brought cut the head of an elephant and joined above this individual’s neck, and from then on this one got the name of gajAnanan, that is, rudhra gaNapathy,

kanalum mukkaN mUrththiyum – like the fire that gathers during the time of annihilation, he having the three eyes, and so is called virUpAkshan, that is rudhran; or kanalum is about the fire deity (agni) that came in support;

veppum – into the war where it could cause pain to the enemies, that is dhEvathA of fever, etc.,

After coming with all these support and fighting, they could not stand in front of the fight of krishNan,

mudhukittu –  As said in ‘muNdan neeran makkaL veppumOdiyangi Odida [thiruchchandha viruththam – 71]’ (rudhran and his people and other dhevathas ran away), they ran away showing their back, and then learned about krishNan’s supremacy,

for creating all the worlds, he was lying down on a budding leaf of banyan, and was the reason for the birth of, starting from, chathurmukhan, from His divine flower like navel; that is, he is the source of all the worlds; they learned that and,

pORRida – understood the relationship of father-children with Him, and stood in front of Him, and heaped their praises on Him; rudhran said, ‘krishNa krishNa mahA bhahO jAnEthvAm purushOththamam’;  {now the commentator is involving himself in explaining this praise in detail}.

– krishNa – for doing such a big mistake, he is mending it by doing thirunAma sankIrthanam, see!

– mahAbhahO – in an earlier time, when dhEvas and rishis due to the connection of the prakruthi (primordial), called viSvakarmA (of dhEvas), and asked him to make two bows, and he complied to that request, and they took those bows and gave to the two (vishNu and rudhran) and asked them to battle it out, and they too complied, and at that time, rudhran being not able to tolerate the speed of arrows by vishNu, had got his rajas and thamas qualities reduced and got his sAthvik quality show up, and understood vishNu as ‘sarvasmAthparan’ (greater than all), and praised him – this is a well known incident.

In the same way now also after losing him in the battle, and then getting the sAthvik quality show up, and learning the strength of His shoulders, he is praising as ‘mahA bhAhO’.

– jAnE – I got my mind cleared (have now understood) after battling against you and learned the lesson, and that too is based on your mercy;

– thvAm– your highness who is the dear son of vasudhEvar, and who for the devotees is easy to approach;

pORRida – as he praised saying the qualities of emperumAn,

vANan pizhai poRuththa  – as they praised Him, He (krishNan) became happy and pardoned the big mistake of vANan who imprisoned anirudhdhAzhvAn;

thIrththanai – when one accumulates mistakes, those have to be removed by bad experiences and reparations; unlike that, He based on getting praised, had destroyed their bad karmas; He is pathitha pAvana (purifies such people).

Eththum –  (emperumAnAr) who praises krishNan by talking about such greatness; this word is in present tense – (emperumAnAr) establishes emperumAn’s greatness through his granthams like SrI bhAshya, gItha bhAshyam that is ever present.

enRan sEma vaippE – till the time my AthmA is present, for me to survive till then, the wealth that I have saved is – emperumAnAr.

What is the big mistake of bANa: instead of distancing from bodily relatives and surrendering to krishNan, he fought with krishNan for his relative (daughter).  Moreover, instead of being happy for getting a connection with krishNan through the children, he gave importance to his strength and came warring and caused trouble.