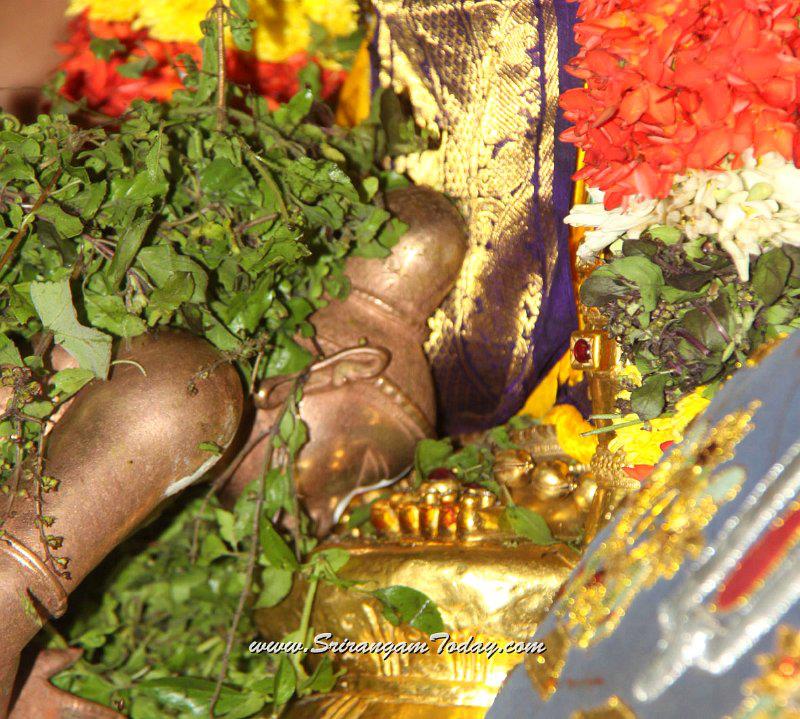 thasyaiva bhagavathO nArAyaNasya –  thasyaiva – as said; bhagavathO – bhagavAn; nArAyaNasya – that nArAyaNan. Earlier (in part 2 of this chUrNai), we had seen the terms bhagavantham nArAyanAm. There, we had seen the qualities of bhagavAn which were needed for him to be prApyam (be the fruit of surrendering) as well as the holder of these qualities. Here, the qualities for him to be  prApakam (as means for attaining bhagavAn) and the holder of these qualities are described.

akhilasathva dhayaika sAgarasya – ocean of mercy for all. akhilasathva – considering all living beings, without any distinction. dhayA – not able to bear the sufferings of others, without expecting anything for self. EkasAgarasya – the waters of dhayA form an ocean and take refuge only under bhagavAn, and under no one else. Is it that he (bhagavAn) wishes to confirm that others suffer and then feels sad for them? In other words, does he look at the extent of suffering of others? No….

anAlOchitha guNa aguNa akhaNda jana anukUla amaryAdha Seelavatha: – he has a quality, sauSeelya, by which he does not consider the virtues or faults of others. This quality is unlimited and is shown to all people without any distinction.

anAlOchitha – not examining whether granting refuge to a person (who wishes to surrender) is advantageous or not.

guNa aguNa – Describes qualities which are desired and not desired among ASrithars –  the qualities can be ignorant or knowledgeable; believer or atheist; righteous or unjust; humble or immodest.

akhaNda jana – he does not make a distinction among celestial persons, human beings, animals, plants etc when they approach him as an ASrithar. Here the word jana does not denote people as we commonly understand but any one who has a jani (birth) viz. anyone who is living.

anukUla – he guides the ASrithar to go by the correct path and not take difficult paths.

amaryAdha – here maryAdhA means limit. He does not show any limit when showing his magnanimity to his ASrithars.

Seelavatha: – the quality by which a greater person mingles with lowly persons without feeling proud at his own greatness or feeling contemptuous at the lowliness of the others is called as Seela. Seelavatha: denotes that he has this quality for ever. It may be perfectly acceptable for bhagavAn not to consider the faults or virtues of others. But wouldn’t the others be afraid to approach him? No…

dhEva thiryak manushya Adhi akhila jana hrudhaya Anandhanasya – Without any distinction between the wise and the unwise entities, everyone’s heart will melt out of happiness. What is the basis for such an act? There is a special reason and it is ….

svAbhAvika anavadhika athiSaya guNavaththayA – possessing wondrous quality as his nature, without any boundary. SrI rAmAnuja has described already so many qualities of bhagavAn, right from the beginning. What is this new quality that he is now mentioning? The qualities mentioned all along have been qualities of his AthmA (bhagavAn’s soul). The quality that is being mentioned here is that of his thirumEni (physical form). His AthmA guNas may or may not attract others, but the beauty of his physical form is bound to attract everyone. His radiance and delicate gentleness are the qualities that attract others to him. His beauty attracted even a demonic woman such as sUrpaNakA. Same goes true for vanadhEvathAs (angels in the forest) who were attracted to rAma when he entered forest. His beauty appealed not only to the eyes but also to the hearts of both his devotees and his enemies.
But then, does he not give any special status to his ASrithars (followers)? Or does he remain same to everyone?

ASritha vAthsalyaika jaladhE: – He has the quality of vAthsalyam (treating faults as virtues) towards his ASrithars like an ocean. Who is called as an ASrithar? Is it a person like vashisht or nammAzhwAr? In SrI rAmAyaNam, the rishis (sages) tell SrI rAmA when he enters forest that he is their king whether he is in ayOdhyA or in forest, and they are his citizens and hence he has to protect them. Important to note here is that they are not merely living in the country where he is king, but they accept that he is the ruler and they are citizens. In a similar way, it is  not enough if we live in a dhivya dhEsam but we need to accept the he is the bhagavAn and he has to protect us. Then we can be called his ASrithars. Also, anyone who has performed SaraNAgathi once to him and pirAtti (his consort) is an ASrithar. Included in this category is any person who offers something to him with bhakthi (devotion) – a leaf, flower, fruit or water. The leaf need not be thuLasi (basil plant) but even a dried leaf picked up from the street corner, offered with devotion, is enough, says bhagavAn in bhagavadh gIthai. vAthsalya is the quality exhibited by a cow that removes all the dirt from the body of its calf at the time when the calf is born. It does not clean the dirt if the calf comes dirty after 10 or 15 days. In the same way, bhagavAn removes all our past sins on the day when we carry out SaraNAgathi. But if we commit pApa (sinful act) even after performing SaraNAgathi and go to him for forgiving us, he is not going to oblige. Is there any proof that he forgives the sins when we go to him for taking refuge? Again, in SrI rAmAyaNam, when vibhIshNa comes to thiruppullANi shore, SrI rAma says that if a person comes to him with a friendly mind, he will accept him and not let him down, even if the person comes with faults. Eka jaladhE: – bhagavAn is the only shelter to such ASrithars.

Is it that he only gives to his ASrithars? Isn’t there anything in it for him?

bhakthajana – bhakthi is carrying out service with affection (friendliness). bhakthajana is anyone who does this.

nithya gyAna kriya aiSvaryAdhi bhOga sAmagrI samrudhdhasya – sAmagri – implements. In order to enjoy anything, one should have gyNa, kriyA and aiSvaryam as implements.

gyAna is knowledge about the bhOga vasthu (that which is to be enjoyed), its svarUpa, rUpa, guNa, chEshtA (activity), prayOjana kAla (when it should be enjoyed).

kriyA is the actual act of enjoying the bhOga vasthu.

sAmagrI is the combination of gyAna, kriya, aiSvarya.

samrudhdhasya – this enjoyment is not something finite or small but huge or plenty.
Even if bhOga vasthu and bhOga sAmagrI are available, wouldn’t one need a bhOgasthAnam (place to enjoy) in order to enjoy the bhOga vasthu?

mahAvibhUthE: – maha – huge; vibhUthE – wealth. Here this refers to his SrIvaikuNtam which is three times as large as the entire cosmos (thousands and thousands of aNda katAkam (galaxy)). In order to enjoy the bhOga vasthus, he has a location which is endless and full of happiness. In such a place where he is going  to enjoy the materials (vasthu), does he enjoy singly, like a brahmachAri (bachelor)?

SrImatha: SrI – mahAlakshmi (his consort); matha: – with. In the river of enjoyment, in order to see the shore and assist him, he has lakshmi (periya pirAtti, his consort) with him. If periya pirAtti is not there, does it mean that he can  not enjoy the material? In what way does she assist him?He is known to be avApthasamasthakAman (one who does not have any unfulfilled desire). Will this term become invalid if she is not there? To understand this, we should understand what is bhagavAn’s bhOgam (enjoyment). It is the ujjIvanam (total sustenance) of all jIvAthmAs (all living beings in materialistic realm, leelA vibhUthi). pirAtti‘s role (or assistance) in this is to be a purushakAra bhUthai (one who recommends the jIvAthmA to bhagavAn for giving mOksham). Do we hold on to such a person himself? No…his

charaNAravindha yugalam – two lotus-like feet. His exalted feet are our natural goal to attain, source of wondrous enjoyment and they take in everyone who approaches them. Why should we hold on to them?

SaraNam anuvrajEth – SaraNam – to surrender; anuvrajEth – to hold on firmly. jIvAthmA has to hold on to his exalted feet as the path to reach him, with firmness in mind. It should also be done with the thought that his feet are to be held firmly, all the time.

This brings us to the end of 1st chUrNai. Let us move on to the 2nd.