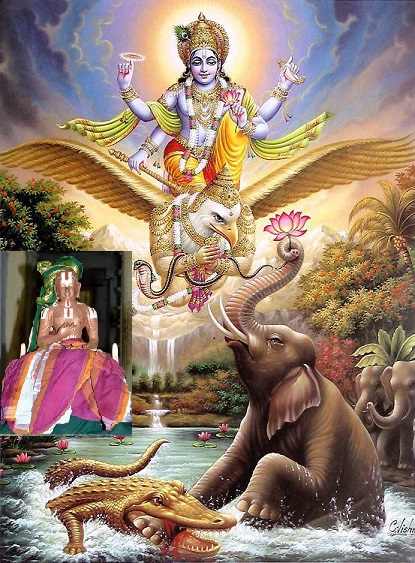 andhAmaththanbu – AzhwAr explains the divine union of emperumAn who appeared (at the end of previous decad) and the great prosperity acquired by him through such union.

In the fifth decad – On hearing the cry of SrI gajEndhrAzhwAn (elephant), bhagavAn became very sad and arrived at the pond, eliminated his pain and gave him great joy; similarly, emperumAn who is krupA samudhram (ocean of mercy), heard the cry of AzhwAr, became very sad and thought about himself “this is not how I should run the universe”, condemned himself for not helping AzhwAr and arrived at AzhwAr’s place at once; he then eliminated AzhwAr’s pain in suffering and consoled AzhwAr to become peaceful, made AzhwAr to become greatly radiant due to the joy of uniting with him, showed his favourable intent towards AzhwAr, showed his true nature, forms, qualities, wealth, divine ornaments, divine activities and his great joys. Thinking about emperumAn’s contented state after doing all of this to him and becoming delighted, amazed and feeling emancipated, AzhwAr joyfully speaks about the great prosperity he acquired.

In the fifth decad – AzhwAr desiring to mercifully speak about emperumAn‘s beauty etc., which showed in emperumAn after he quickly arrived and united with AzhwAr who was in pain of separation, mercifully highlights the following aspects:

In the previous decad, the agony AzhwAr went through was similar to gajEndhrAzhwAn’s agony as explained in SrI vishNu dharmam 68th chapter “gaja AkarshathE thIrE grAha AkarshathE jalE” (gajEndhrAzhwAn the elephant, pulls towards the banks of the pond and the crocodile pulls towards the water). emperumAn with great anxiety, wearing his weapons and ornaments in a disorderly manner, arrived at the banks of the pond with his clothes/hair disheveled. He entered the pond, brought both the elephant and crocodile out with his two hands (one in each hand), and as said in “… grAham chakrENa mAdhava:” (The husband of SrI mahAlakshmi cut the crocodile into two using his chakra) – like a mother who would nurse the toddler while treating her wounds (so the focus of the child is diverted), by having SrI mahAlakshmi and himself there and diverting the focus of both (elephant and crocodile). He severed the head of crocodile without hurting gajEndhra; he then made a small bundle of his own cloth, blew hot air into that and gave fomentation (oththadam) to ease the pain of gajEndhrAzhwAn and touched him with his cool hands. In a similar manner, emperumAn heard AzhwAr crying out for him saying “valam koL puL uyarththAy” (Oh one who rides the garuda!) and thought “this is how I am managing the universe! Who have I become (from being protector of all to not helping AzhwAr)?” and became perturbed out of embarrassment and fear, appeared in front of AzhwAr with his true nature, forms, qualities, decorations, divine weapons etc and united with AzhwAr. Out of that union, emperumAn became delighted and content a (feeling of accomplishing the task). Seeing that AzhwAr becomes joyful and starts speaking about the great experience he had.