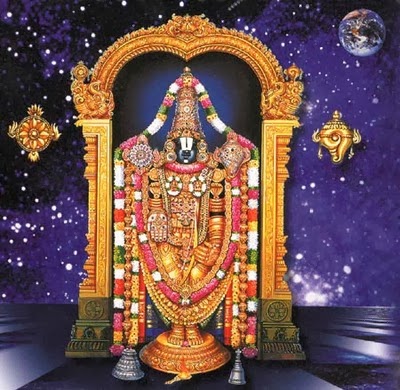 In the second pAsuram, AzhwAr says “SrI mahAlakshmi et al fully depend on sarvESvaran resting on him; such sarvESvaran came, united with me with all his limbs and hence became luminous”.

Subsequently, AzhwAr explains the aujjvalyam (radiance) of emperumAn who has such beautiful limbs (as explained in previous pAsuram) and who gives his limbs as the abode for brahmA, rudhra et al like he is doing to SrI mahAlakshmi.

Second pAsuram – AzhwAr, after explaining how emperumAn became radiant after uniting with him, says “He who sustains brahmA, ISAna (rudhra) by giving his body as resting place for them, is sustaining himself by having my body as his (resting place)”.

The laudable form of emperumAn who is the lord of my clan, without leaving anything, came inside me and united with me, has sun-like complexion; his divine hands and eyes are reddish and fresh like lotus flower; his divine chest is the abode of SrI mahAlakshmi; his navel is the abode of brahmA; his other part is rudhra himself; how amazing is this!

It is to be understood that – just like acquiring bodily radiance and part-by-part radiance after uniting with AzhwAr, emperumAn also acquired radiance for his nithya vibhUthi [paramapadham – indicated by SrI mahAlakshmi] and leelA vibhUthi [samsAram – indicated by brahmA, rudhra].