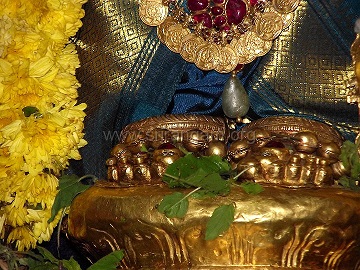 Explanatory Notes:
Sri rAmAnuja, in the first chUrNai of this gadhyam, had stated (a) his svarUpam (that he is always controlled by bhagavAn and that carrying out kainkaryam to bhagavAn is sweet to him), (b) bhagavAn’s auspicious qualities (3 qualities that he displays to all, 12 qualities that he displays only to his ASrithars (followers) and 3 qualities that he shows only to his and his ASrithar’s enemies) and (c) how he wishes to carry out kainkaryam to bhagavAn in all states, without interruption. In the 2nd chUrNai, he repeats these in the first part, starting from svAthma nithya niyAmya until nithya kainkarya. Why would he repeat something that he had just mentioned to bhagavAn? It is because of pArathanthriyam (dependence on bhagavAn) he wishes to restate his svarUpam; because of the superiority of bhagavAn, he wishes to restate bhagavAn’s auspicious qualities and because of the sweetness of carrying out kainkaryam he wishes to restate his desire for doing kainkaryam to bhagavAn. Not only that. In order to carry out this kainkaryam, he needs to make himself eligible for it. What is the enabler for doing kainkaryam? Is it not surrendering to bhagavAn? It is this that he is now asking for, from bhagavAn.

Let us briefly see the first part of this chUrNai, based on what we have seen in the first chUrNai (2nd part). SrI rAmAnuja says that being controlled by bhagavAn and being a servant to him are his svarUpam (basic nature). He then immerses himself in the auspicious qualities of bhagavAn (21 stated qualities that we have seen in detail). Born out of this experience is a loving desire (prIthi) to carry out  uninterrupted, unabated, exalted kainkaryam in all states, at all times, in all places.
Only one term is new in the repetitive words: anavadhikAthiSaya swAmy – bhagavAn is swAmy (master or lord or owner). What sort of swAmy is he? He is boundless and exalted. More than that, he is swAmy without any cause or reason. We have people on this earth who will be our swAmy for various reasons – be it giving us sustenance for living here (through employment) or our parents who take care of us for sometime, offering us protection or who give us gifts on festival occasions. But bhagavAn as lord or master is beyond all this. He takes care of all the needs of the jIvAthmA in this world; protects him in all ways; the relationship between bhagavAn and jIvAthmA is natural unlike the artificial ones that we have seen above as these last for specified period only.

In the first chUrNai, SrI rAmAnuja described all auspicious qualities of bhagavAn but did not mention the quality of bhagavAn which is being swAmy. Here he says that, indicating that this one quality is equivalent to all the other qualities mentioned in the earlier chUrNai.

prApthyupAya (bhUtha) bhakthi – prApthi – attained; upAya – through; bhUtha – being present; bhakthi – devotion. The kainkaryam that SrI rAmAnuja wishes to carry out is acquired through bhakthi.

thadhupAya samyag gyAna – thadhupAya – that is attained through; samyag – well (defined); gyAna – knowledge.  bhakthi is achieved through gyAna (knowledge). It is that gyAna which differentiates between jIvAthmA (soul) and paramAthmA (bhagavAn) and not any ordinary gyAna. It is the knowledge which enables jIvAthmA to be pArathanthriyan (subservient) to paramAthmA.

thadhupAya samIchInakriyA – thath – that; upAya – through; samIchIna – correct or proper; kriyA – deed. This gyAna is attained through proper deed. What is a proper deed? It is an act done knowing fully well about the AthmA‘s true knowledge and done with three renunciations – that I am the karthA (doer). that it is my duty, and that it is done with a benefit as its goal.

thadhanuguNa sAththvikadhAsthikyAdhi samasthAthma guNavihIna: – thath – that; anuguNa – suitable to; sAthvikath – having sAthvika (purely good) quality; Asthikya – believing in; samastha – all;  Athma – relating to AthmA (soul); guNa – quality; vihIna – deprived of. bhagavdh rAmAnuja lists a few qualities which are needed (basic) to carry out the previously stated deeds and ends up saying that he does not have these qualities. Let us look at these qualities;

thadhanuguNa – to be appropriate to the qualities mentioned in the previous sentence.

sAthvikath – full of sathva guNa (only good qualities, not mixed with unwanted qualities such as rajasic, passion or thamasic, ignorance)

Asthika – believing in bhagavAn/SAsthram and being faithful.

samasthAthma guNavihIna: – SrI rAmAnuja now says that he does not have any of these qualities related to AthmA.

dhuruththarAnantha thadh viparyaya gyAna kriyAnuguNa – anAdhi pApavAsanA
mahArNavAnthar nimagna: –  dhuruththara – not possible to cross; anantha – without end; thath – that; viparyaya – contrary to ; gyAna – knowledge; kriya – deed; anuguNa – appropriate to; anAdhi – from time immemorial; pApa – sins ; vAsanA – knowledge derived from memory; mahA – huge; ArNavam – ocean; anthar – right inside; nimagna: – sunk. SrI rAmAnuja says that contrary to the good knowledge and good deeds which are required for carrying out bhakthi and enjoying bhagavAn’s auspicious qualities, he possesses all the wrong knowledge and wrong deeds. Due to these, he has sunk right at the bottom of the huge ocean called samsAram. And, he doesn’t know how to come out of this endless ocean (here the reference is to the repeated births and deaths that an AthmA undergoes in its journey in samsAram).

thilathailavath dhAruvahnivath dhurvivEcha – thila – sesame; thailavath – full of oil; dhAru – a type of wood; vahnivath – full of fire; dhurvivEcha – unable to separate. SrI rAmAnuja says that though AthmA is self-illuminating (due to his unbounded gyAna) it is not seen. It is not possible for him to separate AthmA from the physical body and see it separately. To understand this he quotes two examples: just as there is oil in sesame, but not seen by the eye; just as there is fire inside a type of wood but not seen by the eye. But why should he attempt to separate AthmA from body? In the previous sentence he mentioned that he is fully sunk in the deep ocean called samsAram and is unable to extricate himself from it. bhagavAn asks him as to why he can not separate himself from samsAram, also called as prakruthi (primordial matter). Responding to that, he says that only those who are desirous of separating the two (AthmA and body) and who can separate the two, can achieve it. Such people would have the mercy of bhagavAn and gyAna vAsanai ( deep impression in the mind about true knowledge). For the others, the body and soul can not be separated.

thriguNa kshaNaksharaNa svabhAva – thriguNa –  three guNas; kshaNa – moment; ksharaNa – changing; svabhAva – basic nature. The AthmA which is inside the body, which in turn is composed of the three qualities of saththva (good), rajas (passionate) and thamas (ignorant), keeps changing every moment; i.e. keeps changing constantly.  This is its basic (the physical body’s) nature.

anAdhyavidhyA sanchitha – ananthASakya visramsana karmapASa pragrathitha: – anAdhi – without a beginning; avidhyA – ignorance; sanchitha – accumulated bundle; anantha – without an end; aSakya –  incapable; visramsana – to untie ; karma – deeds; pASa – rope; pragrathitha: – well tied down. SrI rAmAnuja says that he has been tied down properly by a rope. What is this rope? It is the rope of karma (deeds resulting in puNya (virtue) and pApa (sin)). What is it made of? It is made of ignorance that has been coming with him from time immemorial. Could it be untied? No, it is not possible for him to untie it. First he said that he is deeply sunk in an ocean which has the fine footprint of sins (pApa vAsanA mahArNavAnthar nimagna:). Then he said that his svarUpam has been totally hidden by prakruthi (bhagavanmAyA thirOhitha svaprakASa:). Now he says that he is well bound by the rope of karmA (karmapASa pragrathitha:). Thus the chain is anAdhi vAsanA (all the footprints carried from memory over long period of time or infinite births) – leading to agyAna (knowledge about bhagavAn is hidden) – leading to indulging  in wrongful actions or karma. In turn karma leads to janma (birth, carrying footprints from memory) and ends up in a vicious circle (anantha). Is there any path known to cross this samsAram?

anAgathAnanthakAla samIkshayApi adhrushta santhArOpAya: anAgatha – future; ananthakAla – endless time; samIkshyApi – even if looked at cautiously; adhrushta – not seen; santhAra- crossing; upAya – path. SrI rAmAnuja says that even if he were to look at the future, for a very long number of years, he is unable to see any way (path) by which he can cross this samsAram.

nikhila janthu jAtha SaraNya  – nikhila – without leaving leaving; janthu – all living beings; jAtha – born; SaraNya – refuge. SrI rAmAnuja confesses that not only does he not have good qualities, he also has all the bad qualities; despite this, he says that bhagavAn is the ultimate refuge for all people born in this samsAram. He implies that he too, having been born in the samsAram, qualifies to take refuge (surrender) under bhagavAn. This is similar to his saying in SaraNAgathi gadhyam “akhila jagath swAmin; asmath swAmin” (you are the lord and master of the entire universe; you are my swAmy too).

SrIman nArAyaNa thava charaNAravindha yugalam SaraNamaham prapadhyE  – Sriman – consort of SrI (pirAtti, mahAlakshmi); nArAyaNa – protector; thava – your; charaNam – exalted feet; aravindham – lotus-like; yugalam – two of them; SaraNam – surrender; aham – I; prapadhyE – hold firmly onto. SrI rAmAnuja performs SaraNAgathi in this chUrNai, by surrendering to the exalted feet of bhagavAn. In the first chUrNai, he had prayed for kainkaryam. In this chUrNai, he carries out surrendering so that he will be granted kainkaryam.

SrIman – If the surrendering had been done only to nArAyaNan, he might have looked at all the faults and bad deeds that he had committed in earlier births. But SrI rAmAnuja is calling upon SrIman nArAyaNan – i.e. nArAyaNan who is always with mahAlakshmi.

nArAyana – when the AthmA was lying similar to achith during praLayam (deluge) bhagavAn had mercifully given him an opportunity to be born, learn about bhagavAn, carry out SaraNAgathi, and attain him ultimately. All these were possible because bhagavAn had decided to protect him somehow or the other. Thus, whether one looks at SrI (mahAlakshmi) or nArAyaNa, protection has to be granted.

thavacharaNAravindhayugalam – easily accessible, merciful, bhagavAn’s lotus-like two exalted feet are the means for attaining him. After attaining him, they are the unparalleled objects of desire too for carrying out kainkaryam. There can be no other path, apart from his exalted feet, for us to attain him.

SaraNam aham parapdhyE – As a path to attain you, I hold on to you firmly. This is not a physical action but an act carried out by mind (bhudhdhi).

This completes the 2nd chUrNai. We shall go forward to the 3rd chUrNai.