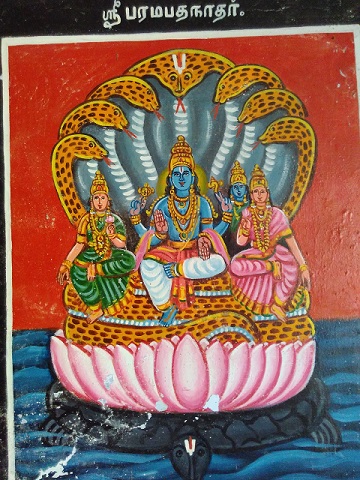 Starting with svAdhIna thrividha chEthana and ending with nArAyaNam, this chUrNai describes the superiority of bhagavAn over the svarUpam (basic nature) of chEthana (sentient) and achEthana (insentient) entities and his qualities aligned to his svarUpam.

svAdhIna – Unlike chEthana and achEthana entities who are dependent on bhagavAn and are controlled by him, bhagavAn is completely independent and is under his own control and nobody else’s. As mentioned in the palaSruthi (hymns listing the benefits) of vishNu sahasranAmam (1000 names of vishNu), jagadhvaSE varthathEdham krishNasya sacharAcharam – all the entities in the universe, apart from himself, are under the control of krishNa.

What are these entities?

Are only these six (bhadhdha, muktha, nithya AthmAs and prAkrutha, aprAkrutha and kAla rUpa achEthana) the dependent entities? For knowing this, we have to consider their

svarUpa sthithi pravruththi bhEdham – the bhEdham (difference) in their svarUpa (basic nature), sthithi (life or sustenance) and pravruththi (their activities). SrI periyavAchchAn piLLai introduces three terms here to explain these three terms: dharmi svarUpam (basic nature of the entity), dharma svabhAvam (qualities of the entity) and vyApAram (activities of the entity). Thus bhagavAn has under his control, the svarUpam, svabhAvam (qualities) and vyApAram (activities) of the six chEthana and achEthana entities. We shall now look at the bhEdham (difference) in svarUpam, svabhAvam and vyAparam of these entities.
For chEthana entities, the difference in their svarUpam is caused by difference in levels of happiness and sadness that they possess. Difference in their svabhAvam is due to difference in the level of their knowledge, ability to carry out tasks (doing physical kainkaryam to bhagavAn is a measure of this), their level of enjoyment (one may eat once in a day while another may eat 4 times a day), longevity (number of years that the AthmAs live in each birth) etc. Difference in pravruththi (activity) is on account of difference in knowledge, desire and effort taken in attaining an objective.
For achEthana entities, difference in svarUpam is due to various manifestations such as prakruthi (primordial matter), mahAn (the great state), ahankAram (individualisation), thanmAthra (subtle elements) etc. When it comes to kAlam (time), the difference in svarUpam is on account of various measures of time such as kalA, kAshtA, muhUrtham etc (these were the units used by our forefathers centuries ago and are still in use in vaidhIka time measurements; today we have seconds, minutes, hours, day, week etc). Difference in svabhAvam for achEthana entities is their being lifeless, constantly changing nature, being permanent (an achEthana entity will change its form from one to another, but it can not be destroyed; it exists in some form or another – for example a tree can exist as a tree, as a furniture, as a stick, as charcoal etc, but it still exists), always existing for the sake of others (like a fruit or sandalwood paste etc), being composed of sAthvic, rAjasic and thAmasic entities. Difference in pravruththi (activity) is its being the initiator for various actions (for example the body which an AthmA takes when it is born in samsAram, due to which the AthmA carries out various activities, thus earning pApa or puNya), being the raw material for fabrication of various articles (wood being used to make various types of furniture, door, window etc; gold being used to make different types of jewels; cotton being used to make different types of cloth), its ability to hide bhagavAn’s svarUpam (just as dust hides the radiance of a gem when it covers the gem, the body of jIvAthmA hides his as well as bhagavAn’s true nature since it is composed of saththvam, rajas and thamas), its non-radiant nature (it cannot emit any radiance on its own and when someone looks at it, the person will not get any knowledge).

klESa karmAdhyaSEsha dhOshAsamsprushtam – A king or head of a family is affected by faults in him (faults such as klESam, karmam etc) whereas bhagavAn is not affected by faults such as these. There is a pAthanjala sUthram which says “klESa karma vipAkASayair aparAmsrushta: purushaviSEsha ISwara”. klESa is defined as “rAgadhvEsha abhinivESA: klESa:“. rAga – desire; dhvEsha – hatred; abhinivESa – greed. These are called as klESa (suffering). There are two other faults which are clubbed to these three – avidhya (ignorance) and asmitha (ego) to form pancha klESa: (five sufferings). bhagavAn is not affected by this klEsa. karma is defined as activities resulting from and resulting in puNya (good deed or virtue) and pApa (bad deed or sin). karma does not touch bhagavAn. vipAka is the resultant of one’s jAthi (species which they belong to), Ayush (life expectancy) and bhOga (enjoyment or experience). These will be different for different AthmAs. bhagavAn is not affected by vipAka. ASaya is vAsanA (impressions left in the mind due to repeated births, which induce certain actions in the jIvAthmA). This is also not applicable to bhagavAn. Thus bhagavAn is not afflicted with any fault.

Is he just the opposite of all faults? No, he is also the repository of all auspicious qualities.

svAbhAvikAnavadhikAthiSaya gyAnabhalaiSvaryavIryaSakthithEja: –
svAbhAvika – natural to bhagavAn. He did not get these auspicious qualities by doing any penance or as a gift from any celestial (demi) god or for any limited period of time. These qualities are present in bhagavAn as a part of his nature. Are these qualities limited in their measure?
anavadhika athiSaya– without any limit. Nobody knows the limit of his qualities – not even he nor his consorts know the limit of his auspicious qualities. periyavAchchAn piLLai cites certain references here such as yathO vAchO nivarthanthE aprApya manasA saha (not possible to state either by words or by thoughts), uyarvaRa uyarnalam udayavan evan avan (his greatness is so high that the greatness of those that we know in this word would appear infinitesimal when compared to bhagavAn – thiruvAimozhi 1.1.1) to prove that there is no limit to his qualities. What are these qualities?

gyAna bala aiSvarya vIrya Sakthi thEja: prabhruthi asankhyEya kalyANa guNa gaNougha
mahArNavam – gyAna – bhagavAn’s ability to see right in front of his eyes all the events that (a) have occurred, (b) are occurring and (c) will occur, at all places. bala – ability to bear entire universe on a small part of his body. aiSvarya – ability to control all chEthana and achEthana entities and direct their activities. vIrya – when he carries the universe on himself, he does not show any distortion in his features or does not sweat. Sakthi – ability to protect all entities with no one to oppose him or cause any hurdle in his path. thEja: – his radiance is such that his opponents will shiver, just by hearing  his name. Also, thEja: denotes his ability to carry out any activity without any effort.

Are there only these 6 qualities? No, there are others too…

prabhruthi – starting from this. While there are many qualities, the above-mentioned six are the primary qualities.

If there are many others, is there any count for these qualities, just as we say ashtOththara (108) or sahasranAma (1000)?

asankhyEya – countless. If a person were granted the lifetime of brahmA and also the thousands of tongues that AdhiSEsha has, he can not complete one in 10000 of his auspicious qualities.

If they are countless, do they also include any dhOsha guNas (faults)? No, he has only…

guNa – type of qualities is such that when one hears them, (s)he will not have to close (her) his ears. On hearing the qualities, one’s heart will melt. We have seen that his qualities are countless.

Can these qualities be grouped and counted?

gaNa – bundles. His qualities are innumerable and even if they are bundled into different groups, they can not be counted. Here, SrI periyavAchchAn piLLai lists a few of these bundles to describe his qualities.

Are these qualities shown one at a time?

Ogha – wave. These qualities come like waves continuously and not one at a time. Where are these waves?

mahArNavam – great ocean. His qualities are like a great ocean and the qualities come towards his ASrithars like waves from the ocean.

We shall see more of this chUrNai in the next part.