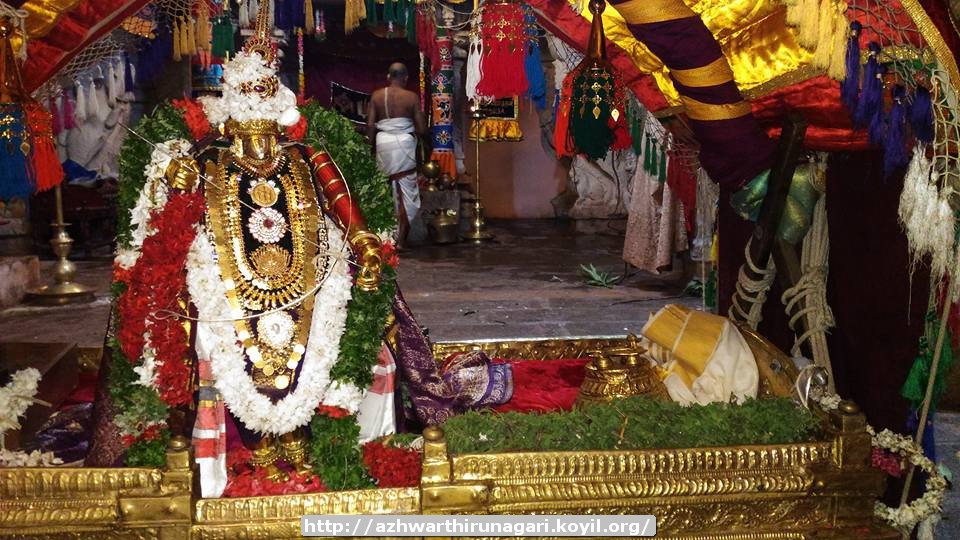 In the end – AzhwAr says “Those who are exclusively involved in enjoying bhagavAn, should enjoy this decad together unlike me who enjoyed it alone”.

Subsequently, AzhwAr explains the result saying “Sing this decad together in association with mutual affection”.

SrI rAma destroyed the clan of rAvaNa who has the greatness of having many groups of rAkshasas (who are hindering others); nammAzhwAr who is the leader of AzhwArthirunagari which is filled with many groups of SrIvaishNavas has analysed and mercifully spoken/sung this decad which is in one among the thousand pAsurams which have many such decads.  You sing this decad (to reveal your joy) agreeing with the meanings (of the pAsurams) in many groups of devotees together and try to dance in joy.

dhairya – daring; he does not bother about his or his ASrithars’ enemies. In SrI rAmAyaNam, SrI rAma conducted pattAbhishEkam (coronation) for vibhIshaNa at thiruppullANi (near sEthu), before even crossing the ocean and knowing the strength / weakness of enemy (rAvaNa). This is his dhairyam. vAlmiki (the sage who composed SrI rAmAyaNam) writes that SrI rAma heaved a sigh of relief for having achieved the objective of what he set out to do on completion of vibhIshaNa’s coronation! Another example quoted by SrI periyavAchchAn piLLai in his vyAkhyAnam is in the battle ground in lankA when rAvaNa‘s mUlabhalam (his special army, capable of inflicting extensive damage to enemy’s army) came to the battle field.  On seeing such an army, SrI rAmA, without any change in his countenance, got ready to annihilate it. This is his dhairyam.

Saurya – the feeling that one would get when, on piercing the enemy’s vyUha (battle formation), looks around the enemy’s army and behaves as if he is amidst his own army, but goes on to create panic among the enemy’s warriors.

parAkrama – when he goes around his army before leaving for battlefield giving dharSan (audience) to his soldiers and checking last minute details, if his opponents see him at that time, they will not view him as an opponent but as their own leader. That is his parAkrama which literally means courage/valour/enterprise/heroism/strength etc.

sathyakAma – sathya – true; kAma – desire; Here, sathya means nithya (forever; permanent). The meaning for sathyakAma is that he has qualities and wealth (nithya vibhUthi and leelA vibhUthi) which are there for ever and which his ASrithars are desirous of. Another meaning for sathyakAma is based on bhagavAn’s point of view. bhagavAn feels that he should protect his ASrithars and this becomes his desire. Since there is no one to prevent him from carrying this out, it becomes his permanent desire or sathyakAma.

sathyasankalpa – Whatever he vows, will happen. He keeps changing himself constantly to appear new to his ASrithars so that they can enjoy him better and better. Another meaning here is that in order for his ASrithars to see him, he takes various avathArams (incarnations) such as dhEva (celestial being), manushya (human being) etc through his sankalpam (vow)

kruthithva – When he gives something to his ASrithars and they get it, bhagavAn feels as if he himself has got it and feels happy. This guNa (quality) is called as kruthithvam. Doing what the ASrithar is expected to do, himself, is also kruthithvam.

kruthagyathA – to be thankful. We would have surrendered to him once, long time back. After that whatever mistakes we commit (unknowingly), he does not bother about these and thinks only about the act of surrender. Even after he gives quite a lot to the ASrithar who has surrendered, he feels that he has not done or given anything to him. He feels so thankful for having surrendered. This is his kruthagyathA.

What has been stated among bhagavAn’s qualities is just a few. But there are countless auspicious qualities of bhagavAn which are like trying to count the particles of water in a great ocean.

parabrahmabhUtham purushOththamam – these are words which are widely quoted in vEdhAntham (upanishaths). parama – supreme; brahmam – absolute; bhUtham – being (entity). parabrahmabUtham – He is huge and he makes those who take refuge in him (surrender to him) huge. He gives his ASrithars the same level of happiness that he enjoys. He shares his 8 supreme qualities with those who attain mOksham (SrIvaikuNtam). Thus he is parabrahmabhUtham.

SrIrangaSAyinam – Instead of staying in some place where no one can see him, bhagavAn takes a simple form which can be seen by everyone. Thus he comes to SrIrangam and lies on the bed of AdhiSEsha.

asmathswAminam – my swAmy (my lord or one who owns me). He is not merely parabhramabhUthan or purushOththaman or SrIrangaSAyee. He is my swAmy. He is so beautiful and so simple. This defines the closeness of SrI rAmAnuja with bhagavAn. In SrI rAmAyaNam, lakshmaNa tells that he is servitor to SrI rAmA. Here, SrI rAmAnuja, who is punaravathAram (reincarnation) of lakshmaNa says that bhagavAn is his swAmy (lord), which means the same.

Here SrI rAmAnuja starts mentioning his qualities to carry out kainkaryam. He says that he knows fully well that he is completely controlled by bhagavAn and that he is his servant for ever. Being a servant to bhagavAn is very sweet to him. And this, he says, is his basic nature.

thadhEkAnubhava: – thath – that; Eka – one; anubhava: – experience. Making only bhagavAn’s experience as a matter for gyAna (knowledge) (i.e. relevant to his knowledge). Nothing else matters. This is like the state of parabhakthi.

thadhEkapriya: – making bhagavAn’s experience as a matter for bhakthi (devotion). When gyAna matures, it becomes bhakthi. These words (anubhavam and prIthi) are born out of parabhakthi, paragyAna and paramabhakthi states, as we have seen several times in SaraNAgathi gadhyam. To recapture briefly, parabhakthi means having knowledge about bhagavAn; paragyAna means having vision of bhagavAn; paramabhakthi is attaining him. Another explanation for these three is: when one is with bhagavAn, one becomes happy. When bhagavAn leaves, that person becomes sad. This is parabhakthi. This is mere knowledge. paragyAna is craving constantly and taking efforts to be with bhagavAn. paramabhakthi is being always with bhagavAn, after attaining him.

bhagavAn is full of gyAna (knowledge) etc (gyAna, bala, aiSvarya, vIrya, Sakthi, thEjas etc that we have seen several times). SrI rAmAnuja wishes to enjoy that bhagavAn, in a very clear way (we shall see the meaning of this shortly). And, that experience should be without any hurdle. Thus, he is praying for having uninterrupted experience of bhagavAn, who is full of auspicious qualities, in a very clear way. Let us now look at some of the subtle meanings of these terms.

bhagavadh rAmAnuja prays for being a servitor to bhagavAn to carry out kainkaryam (service) to him. This comes out of the love that is born out of paripUrNa, viSadhathama anubhavam (clear experience of bhagavAn who is full of auspicious qualities) that we have seen in the previous sentence. This experience should be there in all appropriate states, leaving out nothing. What are these states? When emperumAn is sitting, lying, standing, walking, speaking to nAchchiyArs (his consorts); in the morning, in the afternoon, in the evening, in the night; whether he goes to his antha:puram (retiring house, private quarters), thiruvOlakkam (public assembly), garden, lake etc. One may wonder, what kainkaryam can be done when bhagavAn retires in the night, to his antha:puram. nammAzhvAr says that when bhagavAn goes to antha:puram, he would be the cot, or lamp, or mattress, or flower used for decorating his bed, anything – i.e. achith (insentient) entity. This means, doing kainkaryam in all states, at all times, in all places, leaving out nothing. And this kainkaryam is carried out with loving desire because it is being rendered to bhagavAn and pirAttis (his consorts). While doing this kainkaryam, only one thought should be in the mind of the servitor, that he is the SEshabhUthan, SEshabhUthan, SEshabhUthan. The basis for all these is: gyAna (knowledge) about bhagavAn, mainly through kAlakshEpam and upanyAsam (listening to bhagavAn’s stories, his incarnations, his auspicious qualities etc) in our sampradhAyam; experiencing bhagavAn after acquiring this knowledge; leading to desire or love for bhagavAn, which ultimately takes one to carrying out kainkaryam. Hence knowledge or parabhakthi is the starting point. SrI rAmAnuja keeps stressing on this, every time he prays to bhagavAn. When he, who is such a gyAni, asks for gyAna, what can we say of ourselves!!    lakshmaNa, in SrI rAmAyaNam, did kainkaryam to SrI rAma in ayOdhyA (city), in dhandakAranyam (forest), in kishkinthA (mountainous region), in thiruppullANi (sea shore), while walking on sEthu (on the sea), while fighting (on the battle field), when rAma was alone, when he was with his sIthAppitAtti, when he was in court assembly, when he was in the battlefield, in the morning, in the evening, in the night, leaving out nothing. The same lakshmaNa, now re-born as  SrI rAmAnuja, asks for all these kainkaryams which he carried out in an earlier yuga (earlier age). The same was prayed for by nammAzhvAr in thiruvAimozhi 3.3.1 (ozhivil kAlamellAm udanAy manni…).

Do we need to wait till we reach SrIvaikuNtam to carry out kainkaryam to bhagavAn and pirAtti? No, we can do all these in our place itself, even in our house – doing nithya thiruvArAdhanam with love, decorating bhagavAn and pirAtti in our house itself. Going to the temple, sweeping the premises, cleaning it, making kOlam (patterns), stringing flowers for bhagavAn to make a garland, helping bhattar (priest) or parichArakar (one who cooks thiruvamudhu (food) for bhagavAn) or adhyApakas (those who recite pAsurams and vEdha in front of bhagavAn), accompanying uthsavar when he goes around town during uthsavams etc are the kainkaryams which one can do in this vibhUthi itself. For all these, despite being repetitive, the starting point is gyAna.

This brings us to the end of first chUrNai.