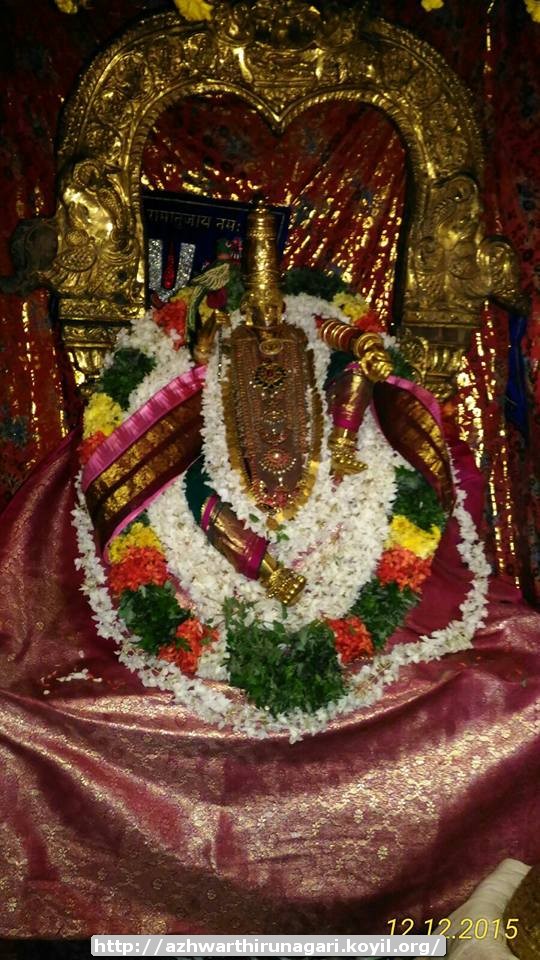 In the end, AzhwAr says that those who learn this pAsuram with meanings clearly, will not have the misunderstandings such as “emperumAn is not supreme”, “other dhEvathAs are supreme” etc.

Subsequently, AzhwAr mercifully explains elimination of all doubts as the result of (learning) this decad.

In the end, AzhwArsays that for those who know/recite this decad, they do not have the defect of considering other dhEvathAs as supreme.

Eththa – having the glorification by the residents of the world as water that helps him grow
Ezhulagum – all worlds
koNda – measured and accepted
kOlam – bodily beauty
kUththanai – measuring as a talented dancer will dance effortlessly
kurukUrch chatakOpan – nammAzhwAr
sol – mercifully spoken
vAyththa – rare/unexpected gain (for the universe)
ivai paththu – these 10 pAsurams
udan – accepting (the meanings)
Eththa – speaking in the form of praise
vallavarkku – those who are capable
Or Unam – defects (considering other dhEvathAs as great, considering them as equal to emperumAn or considering emperumAn to be lower than they)
illai – not present

These 10 pAsurams are mercifully blessed by AzhwAr as most rare/unexpected gain (for the universe) in glorification of the most beautiful emperumAn who measured all worlds effortlessly like a talented dancer dances. For those who are well versed in this decad (accepting the principles) there is no defect of considering other dhEvathAs as great, considering them as equal to emperumAn or considering emperumAn to be lower than they.

In the first pAsuram, the principle explained in this decad is briefly highlighted. From the second pAsuram, emperumAn‘s many qualities such as he being the remover of sorrows, being the one with auspicious qualities, being most tender, being lotus eyed, being the helper in danger, having great abilities to accomplish the unimaginable tasks, being the creator and sustainer, being the annihilator, being the object of praising of those who consider themselves to be supreme – thus establishing his supremacy through various examples and finally declares the result of those who learn this decad and completes the decad.