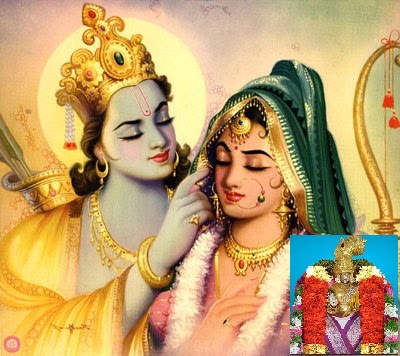 mUrkkar AvAr – Those of foolishness, would,
(instead of)
kEttu – hearing from the learned
thappAmal – without missing/without mistake
muRai – in the proper ways (kramam) about
munnOr – what pUrvAchAryas (preceptors)
mozhindha – divined
pin – and after that
Orndhu – thinking through that
thAm adhanai pEsAdhE – and saying that to others in the same ways (kramam),
(they would)
solli – say to others
thORRinadhE – only what occurred
than nenjil – to their mind,
enbar – and would say:
idhu – what I have said
suththa upadhEsa para vArththai – came purely in the lineage of advice.

and now, in this pAsuram ‘munnOr’ and by next pAsuram ‘pUruvAchAriyargaL’, he shows the differences between the advice of two types of people, and about knowing the nature of foolish ones between them, and about the gain of true nature due to ones who grow the true nature, and so completes the discussion.

and in this pAsuram, as he said earlier ‘munnavarum pinnavarum mUrkkar ena vittu [upadhEsa raththina mAlai – 68]’, he is showing who are such foolish ones; or, thinking that we should talk about the opposite ones who are bad for the AthmA, he is divining a separate pAsuram for that here.

muRai thappAmal kEttu – after hearing such words that are interested in us, in the residence of AchAryan, in the ways of guru-disciple, and in the way of sampradhAyam;

or, munnOr mozhindha muRai thappAmal kEttu – the preceptors divined about matters related to AchAryas as said in ‘uththAra yathisamsArAnmadhupAya plavEna thu’ (he (AchAryan) uses the boat that is AthmA and gets us to the shore), that Is, considering their AchAryan as the savior, and as said in ‘gurumUrthi sthithassAkshAth bhagavAn purushOththama:’ (purushOththaman is present in AchAryan) and so determined that AchAryas are incarnations (of emperumAn), they advise to their disciples also the same way; not missing/making mistake in this order;

pinnOrndhu – after listening to it, thinking about it thoroughly with involvement and interest,

thAm adhanaip pEsAdhE – Being ones to give advice, instead of saying to those who are interested in hearing from them about what was heard and led to clarification;

it is saying how they are giving advice (instead);

than nenjil thORRinadhE solli – Instead of following what is said in the true references (pramANams), saying through their speech contrary meanings that arose in their crooked minds;

Or, not being enthusiastic in the matter AchAryan, having accepted only his help, with such dry heart, what ever occurred to it is what they say to others.

In this way, using the dry heart they say which are of disrepute and they say with decorated words, and they don’t stop with that; instead –

They create such contrary meanings for everything; their false words would show up like the weeds among plants, and like rAkshasas for the Adhithyan (sun), and will cause a lot of loss; so it would arise and die, and would not stay well – also since these are words that arose only which are being told;

When asked who such bad ones to give advice are, he (maNavALa mAmunigaL) says they are mUrkkar – foolish ones, who would damage by their advice. Those who don’t analyze fully are of foolishness; this name is matching their nature;

In this way, who give bad advice are fools; and fools would give such bad advice;

(Instead of understanding the divine opinion of our AchAryas and following the ways and methods according to that, they who say what came to their mind, they being independent of bad repute, and not having enthusiasm in the matter of their AchAryan, they being unfortunate from the womb and having dry heart, they being ignorant about the inner and deeper meanings of our dharsanam and the matching conduct, that would not stand for too long).