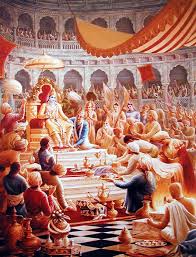 In the fourth pAsuram – AzhwAr says “since there is no one other than emperumAn who has matching beauty/tenderness of the flower and the predominance to accept worship, he alone is the sarvESvaran (supreme controller)”.

Subsequently, AzhwAr says none has predominance to accept worship like him (bhagavAn).

Fourth pAsuram – AzhwAr says emperumAn is the ISwara due to his tender nature and his predominance.

thEvum –  the celestial beings
epporuLum – all beings starting with the human beings
padaikka – to create
pUvil – in the lotus flower positioned in his navel
nAnmuganai – chathur muka brahmA (four headed brahmA)
padaiththa – one who created
thEvan – dhEva (supreme God)
emperumAn – my master
allAl – if not (for him)
pUvum – offerings such as flower
pUsanaiyum – ArAdhana upachAram (worshiping and attending)
thagumE – does it fit? It does not.

Would worshiping and attending, offerings such as flowers be a fit for anyone other than emperumAn who created four headed brahmA in the lotus flower positioned in his navel in order to create celestial beings, human beings and all other types of beings?