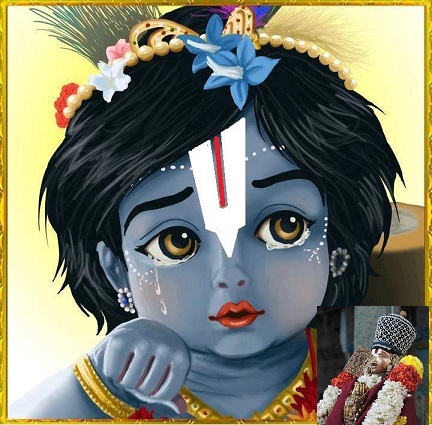 14th and 15th chUrNais are short ones and hence we shall see them together, First, the 14th chUrNai:

Here too, bhagavadh SrI rAmAnuja quotes from 3 SlOkas (verses) of bhagavadh gIthA, but taken from different Chapters. The first line is taken from the 22nd SlOka of 8th Chapter, the 1st half of second line from 54th SlOka of 11th Chapter and the second half from the 54th SlOka of 18th Chapter. Let us look at the meanings of these verses:

purushas sa para: pArtha bhakthyA labhyas thvananyayA: pArtha – arjun!  sa – that; para: purusha – the highest among the purushas (we have seen the meanings of these words in earlier chUrNais, there are 5 different types of purushas, the achith (apurusha), badhdhAthmA, the mukthAthmA, the nithyAthmA and bhagavAn, who is purushOththama); bhakthyA – through devotion; thu – only; labhya: – can be attained; ananyayA – not by any other means. SrI krishNa tells arjun that the supreme being can be attained only through bhakthi and through no other means.

SrI krishNa further says that it is only through bhakthi (devotion) and not by any other means does my devotee attain the highest position.

Let us now move on to the 15th chUrNai.

parabhakthi paragyAna paramabhakthyEka svabhAvam mAm kurushva – parabhakthi – to know about bhagavAn; paragyAna – to envision bhagavAn; paramabhakthi – to attain bhagavAn; Eka – only; svabhAvam – basic nature; mAm – me; kurushva – make. While SrI rAmAnuja had already prayed for being  granted parabhakthi, paragyAna and paramabhakthi, here he wants these three to be part of his svabhAvam (nature). It should be clearly understood here that he is asking for these three levels of bhakthi as a prerequisite for carrying out kainkaryam and not as upAyam (path to attain mOksham). One may wonder as to why he is asking for all three when paramabhakthi alone would be enough to carry out kainkaryam in SrIvaikuNtam. Let us look at it this way. We have food every day. The quality of food as prepared in the house would be  almost the same. The type of food is also almost the same. But every day before we sit down to eat, there is an expectation as to what is going to be served today, even though we know what would be as we have been eating for ages. Why do we have this feeling of expectation? It is because of the change in the type of hunger that we have each day. First we imagine what the food prepared for the day would be; then we see the actual food when we sit and are served food; the third is the pleasure that we get after partaking of the food. Every day all these three ingredients, the imagination, the actual seeing and the feeling of satisfaction after eating, are there in us. And we need all three to enjoy the food served. Now let us look at what happens (or will happen) in SrIvaikuNtam. Here bhagavAn, who is simile for food, is  not constant like food, but keeps changing. One day he will give dharshan (view) like varAha, one day like vAmana, one day like nrusimha, et al (varAha, vAmana, nrusimha are all various avathArams (incarnations) of bhagavAn on earth). And the expectation from nithyAthmAs and mukthAthmAs will be very high to know how bhagavAn would show himself up each day. Thus it is not enough to have only paramabhakthi, but it is equally important to have parabhakthi and paramagyAna to fully appreciate bhagavAn’s various forms and do kainkaryam to each of these [Thanks to vELukkudi SrI krishNan swAmy for explaining this lucidly in his upanyAsam on gadhya thrayam].

We shall now move on to the 16th chUrNai, which is the last chUrNai in which bhagavadh SrI rAmAnuja speaks to SrI ranganAtha. After that, from 17th chUrNai, till the 23rd chUrNai, it is only bhagavAn who speaks and SrI rAmAnuja only listens. It will be a wonderful experience to know what bhagavAn tells SrI rAmAnuja.