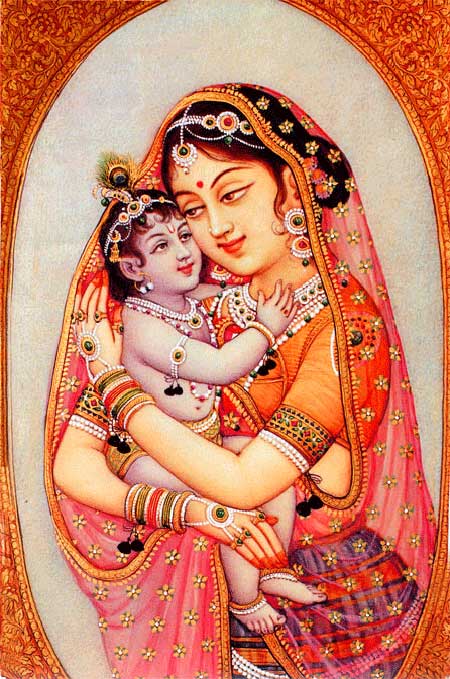 Synopsis: In the previous pAsuram, paramAthmA was described as the ONE and the only ONE who does not have anything to take to make HIM complete. jIvAthmAs were described as the souls that has nothing to give HIM to paramAthmA. Kamban described perumAL sri rAma and HIS divine consort sIthA pirAtti as “marungilA nangaiyum vasaiyil aiyyanum”. He described them in a jocular fashion. He called sIthA pirAtti as one who does not have a hip and sri rAma as the ONE without any complaints. Similarly, the lack of ability to accept anything and the lack of ability to offer anything were clearly dealt in the previous pAsruam. Continuing on the same thought process, aruLALa perumAL emberumAnAr says that there is no one who can win over perumAL. One who realizes this truth is known as “gyAni”. gIthAchAryan (lord krishNa) says that such gyAnis are my souls. Moreover, these gyAnis are the eternal recipient of MY love. I am always bowled over / defeated by their love towards ME”. aruLALa perumAL emberumAnAr celebrates these gyAnis by saying where are such gyAnis found? sri ANdAL described perumAL as “kUdArai vellum sIr gOvindhA” that means that perumAL is someone who gets bowled over by HIS devotees. This pAsuram describes how rare are such gyAnis.

illai enRu – have a lack of something.

ettumadhO – is it something that

Oruvarkku – a person can get?

illai – perumAL has no fault that is caused by

enRU – This particular is thought is

kURinArillA – something that is not spoken by someone

kAN – Please go ahead and see in vEdhas about this fact!!!

Illai iruvarukkum enRu: There is something that both paramAthmA and jIvAthmA have.  In the case of paramAthma, HE is one without any fault as described the phrase “kuRai onRum illAdha gOvindhan”. However, in the case of jIvAthmAs, there is nothing that they have as described by the phrases “aRivonRumillAdha Aykulam” and “poruL allAdha”.  This is the true state of jIvathmAs and paramAthmA. It behooves us to always think about this truth. If one were to think incessantly on this, to such souls, perumAL sriman nArAyaNan comes and serves them forever. We can look at AzhvArs‘ pAsurams to see examples for this. thiruAimozhis including “vazhavEl ulagu”, “minnidai madavAr”, “kaNgaL sivandha” and  “OrAyiramAi” are examples of where perumAL comes and serves them.  To those people who does not realize this truth, it is impossible for perumaL to come and serve them. This is explained in the following paragraphs.

iRaiyai venRirupAr illai: perumAL does not need to obey anyone. HE is independent and acts upon HIS volition. It is impossible for anyone to control perumAL. However, it is very easy for gyAnis to control HIM. HE is very accessible to such gyAnis as revealed by “paRRudai adiyavarkku iLaiyavan”. Can we see such a gyAni?

akdhoruvarkku ettumadhO: Can anyone incessantly think about perumAL’s total completeness and our total incompleteness? It is highly difficult to practice this in this world that if full of “I” and “mine” (ahankAram and mamakAram). This is why it was said that it is impossible to get perumAL in control.

illai kuRaiyudaimai enRU kURinArillA: This phrase is to be read as “kuRai thAn illai udaimai thAn illai” in order to get the meaning. The word “thAn” comes in between to impart exclusivity which would mean “there is no fault at all” and “there is no possession at all”. As mentioned earlier, for perumAL, there is no fault of getting something from the soul. There is nothing that a soul can give perumAL. This truth is not to be realized easily and the reason for this is explained in the following paragraphs.

maRaiyudaiya mArgaththE kAN:  It is latent in the vEdhas and that is exactly why it is extremely difficult to know it. vEdhas are not something that is being created by someone. It is not confined by time either. It is devoid of faults such as “aiyam” and “thiribu” (unclear and different meanings respectively) and so is the most credible and authoritative body of work. One needs to know the meaning from those who learned it. The word “kAN” literally means “hey look!” and so the author aruLALa perumAL emberumAnAr talks to someone who is infront of him (or it can also be understood as that person is a representative for all of us and hence aruLALa perumAL emberumAnAr advices us). maNavALa mAmunigaL, who wrote the explanation, yearns for such gyAnis aforementioned and thinks if they can be seen in the practical world.

The overall essence of this pAsuram is as follows. perumaL sriman nArAyaNan is complete. The souls are HIS property. Hence there is nothing called “property” of property. This is the secrete purport that is latent in the vEdhas. This meaning can be understood only by people who understand vEdhas and impossible for others. gyAnis, who understand this nature of these two, to them, perumAL dances to their tunes and comes and serves them.  Except for those gyAnis, it is impossible for the people in this materialistic to realize this. Thus the thought about “paramAthmA-jIvAthmA” relationship will make perumAL come and serve a person while the lack of it will make it impossible to do so. nammAzhvAr said “paththudai adiyavarkku eLiyavan piRargalukku aRiya viththagan”. perumAL is very near to people who abide by the shAshtrAs and is very far to all those who does not obey it. kaNNan described gyAnis as HIS soul in bhagavad gIthai. HE was totally accessible to them. ANdAL described kaNNan as one who comes running if periyAzhvAr says “kAppida vArAi”, “pUchchUda vArAi”, “ammam uNNa vArAi” etc. maNavALa mAmunigaL said “gyAniyarkku oppOrillai ivvulagu thannil”.