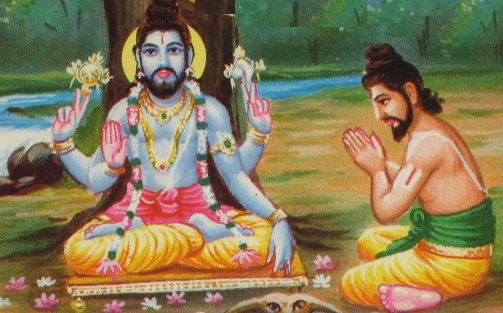 vishNu who performs all the three acts of creation, preservation and destruction, is Himself the meaning of the letter “a”; “ma” stands to mean the animate life, jIva for whose enjoyment/experience the whole hemisphere is an instrument; the letter “u” establishes a special relationship between these two which is not congruent to anybody else. Thus, the single word, aum, i.e., praNava, gives this meaning which is the essence of all the vEdhas.

By the central word of ‘nama:’, man’s end, means for that end and his personality, all these three subjects are indicated. Independence, self protection, and certainly no subjugation to anybody other than Him as these are His personality are hinted by stressing that even while at His disposal the individual soul has no conscious experience of the bliss in an exclusive manner [individual’s bliss is derived only from bhagavAn’s bliss].

I belong to the Lord. So I do not belong to myself. The word ‘nArAyaNa’ stresses that for all the souls and transient perishable things, the ultimate destination is the Lord. Service unto Him is inborn. It also emphasizes service unto Him in all times and circumstances.

In this SlOka certain explanations are offered to the person who has adopted prapaththi, absolute surrender to Him as means for realization, for the frequent doubts occurring in the mind. When a doubt arises about the difference between the identity of body and soul, he should watch closely the 3rd letter ‘ma’ and get clarity. He can realize that as the body is non-knowing object during sleep and/or death, it is different from the soul. So it is not the base for knowledge. Once he knows the body is not the base for knowledge, and the soul is, he can gain insight into the fact that the soul is not independent on its own but sustained by the Lord by looking at the first letter ‘a’. Once he realizes the soul belongs to nArAyaNa, he shall know that the second letter ‘u’ indicates it belongs to none else but only to Him. When the tendency for protecting self arises, he shall look for the meaning of ‘nama:’ which means ‘not mine’. When illusion occurs about relationships with people he shall realize these relationships are transient, but His is permanent. When temptations stir he shall look at the fourth clause, ‘Aya’ and remember service unto Him is his personality/identity, and thus rid himself of worldly bonds/petty desires.