Now as in this way she incarnated, he (maNavALa mAmunigaL) divines the greatness of this star day through showing that there is no equal to this day, with ‘periyAzhvAr peN piLLaiyAy’.

It is the greatness of him (AzhvAr) who is the reason for her birth.

periyAzhwAr who was having the main kainkaryam of making flower garlands, found her (ANdAL) under a thiruththuzhAy (thuLasi) plant, and took her and gave her in the hands of his dhEviyAr (wife), and she was childless, she took this girl of someone else with a lot of affection; at that time, her breasts produced a lot of milk as said in ‘van mulaigaL sOrndhu pAya [periyAzhvAr thirumozhi 2.2.4]’ ((as yaSOdha saying to krishNan) my beautiful breasts due to my love for you are producing milk which is pouring out). It is usually only for the mothers who delivered their babies that the milk would produce when they have their children. So it talks about her being their girl child. 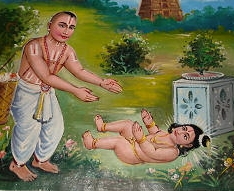 ANdAL piRandha – This is one (great) birth of her having greatness. nAchchiyAr who has got the worlds {bhUdhEvi} has come and incarnated in this world.

piRandha – ‘nAnum piRandhamai poy anRE [nAchchiyAr thirumozhi – 10.4]’ ((if chakkaravarththith thirumagan’s words are not truthful, then only) my birth would also be not truthful), is how she has talked (about her own birth).

The one who got (janakan) and the one who was born (sIthA pirAtti) also say ‘mE pithA, me suthA [SrI rAmAyaNam – bhAla kAndam 73.27]’ (my father, my daughter); in the same way periyAzhvAr too said ‘oru magaL thannai udaiyEn [periyAzhvAr thirumozhi – 3.8.4]’ (am having only one daughter (though this is said in a different context)), and his daughter ANdAL too said ‘pattar pirAn kOthai’ (periyAzhvAr’s daughter gOdhA (AndAL).

piRandha thiruvAdippUraththin seermai – Because of birth only the greatness is present for this day. When said there isn’t any other day that are mentioned till now that has got this greatness, then if there is a question as to why not, then,

manamE uNarndhu pAr – Oh the mind which has got the ability to analyse well, instead of giving a cursory look, you think deeply again and again about this day.

ANdALukku uNdAgil oppu itharkum uNdu – It there is an equal to ANdAL who rules all the worlds, then there would be an equal to this day also.