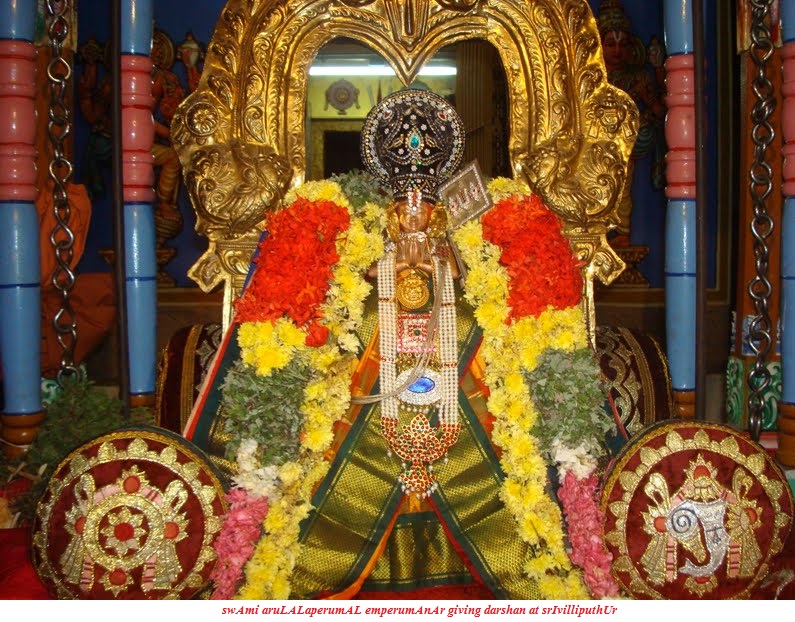 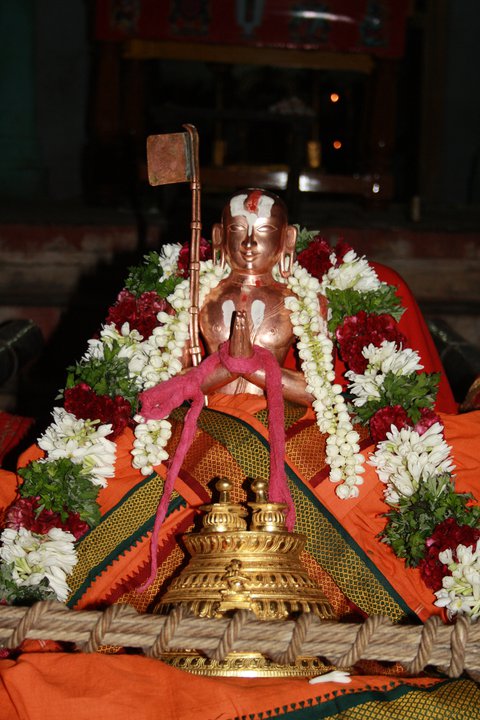 nIL nilaththIr = Oh! The people of this big world!!!
enRum  nIngAmal = without separating at any point of time
ninaiththu =  Constantly think
thozhumingaL = and procrastinate towards
ampadhamE = the beautiful lotus feet of
aruLALa mAmuni = aruLALa perumAL emberumAnAr, who is
AngAram aRRa = a person devoid of any pride (due to knowledge, wealth and high caste birth) and the one who
parindhu = blessed us with his compassion and
aLikkum = gave us in the form of a book
pramEya sAram = called “pramEya sAram” that gives the essence of thirumanthiram which is
pAngAga = beneficial
nalla = to the soul’s sustenance
man = This aruLALa perumAL emberumAnAr was a poet (leader)
vAzhum = who lived
pudhuppuli = in the place called “pudhuppuli” that was surrounded by
pUngA = beautiful gardens and
vaLam pozhil = fertile orchards
sUzh pudai = on all four sides

pramANam – benchmark / measuring stick with which an object is known

pramEyam – the one that is being measured / understood

pAngAga: The grantham (book) pramEya sAram is very easy that those who learn it are being captured by the beauty and its simplicity. The essence of thirumanthiram is being beautifully described in these 10 pAsurams. Hence it is called as pramEya sAram.

parindhaLikkum: aruLALa perumAL emberumAnAr blessed the people of this world with this wonderful work called “pramEya sAram”. He blessed all the people of this world in order for them to reach the highest goal. His divine bless was transformed into a book format which is in an easily comprehensible form. He followed the orders of his AchAryan svAmi rAmAnujAchArya, who asked his disciples to spread the divine purports to all those who are genuinely interested to know.

aruLALa mAmuni: “muni” is someone who always thinks about the benevolence of others. This character is something only a muni can have and not any other person. So, he is celebrated here as “mAmuni” or the great muni. One of the many traits of such a mAmuni is that he is completely devoid of any pride in him. The total dearth of any pride in him is being referred as “AngAram aRRa”. The author of this thaniyan urges us to go and prostrate at the lotus feet of such an AchAryan. The person needs to meditate upon this mAmuni’s feet in his mind when prostrating, similar to the relationship between a body and its shadow. In the word “ampadham”, the second degree case ending is being latent. It follows the tholkAppiya grammar that says “aiyum kaNNum allA poruLvayin mei urubu thogA”.

ampadhadhai: The prefix “am” means beautiful and “padham” refers to the beautiful feet. The beauty for a feet is the quality of never giving up any disciple at any point of time. The “EkAram” or exclusivity that is the ending syllable as in “ampadhamE” describes the fact that it is enough if we fall at aruLALa mAmuni’s lotus feet, implying that there is no need to go to perumAL.

man: The person who served as the leader of the people who were very well versed in vEdhAs and shAshtrAs. This place “pudhuppuli” is a place that was surrounded by beautiful gardens and fertile orchards. This goes ahead and conveys that this place was a perfect place for those who wanted to have greater knowledge.

pudai: This means surrounded on all four sides.

Hey! People of this great world!!! Please take refuge at the lotus feet of svAmi aruLALa mAmuni who hailed from the place called pudhuppuli” that is surrounded by beautiful gardens and fertile orchards and the one who gave the world the essence of thirumanthiram in the form of a wonderful book called “pramEya sAram”.