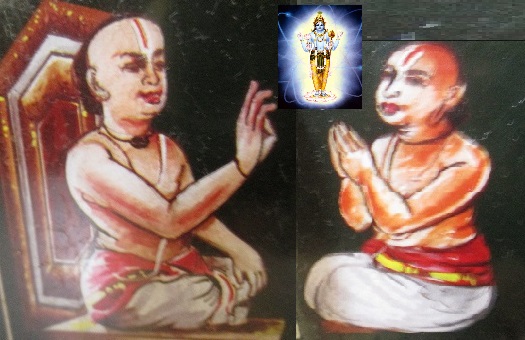 The essence of thirumanthiram is “Om” that is also known as “praNavam”. The crux of praNavam is being described in this first pAsuram.

avvAnavarku = perumAL sriman nArAyaNan, who is being referred by the word “a”

ivvARu = There are some people  who

rupARkku = stand by such great aforementioned advices from their AchAryAs.

kaNdiruppAr = Those people who realize themselves as someone who

iruppAr enRu = will go and live forever with nithyar, mukthar and other devotees at

mItchiyillA = a point of no return

nAn = I (Adiyen) who is a devotee of SrI rAmAnuja

iruppan = will strongly believe in this.

avvAnavarku: Sriman nArAyaNan is the very meaning of the word/syllable “a”. HE is being referred by the word “a” in the vEdhas. In this pAsuram, the word “a” is used as both “name” and its meaning, i.e., the name “a” would refer perumAL as its target and would mean perumAL as its very meaning. The relationship between a name and its meaning cannot exist separately. It has to be always in unison. This can be understood in this pAsuram with this “a”. mahAkavi kAlidhAsa in his salutary chapter of his magnum opus “raghuvamsam” describes the state where perumAL and pirAtti are together. He described them as inseparable as “word and its meaning”. It is similar to saying something as “salt” because it is salty. Hence, kaNNan HIMSELF in his bhagavath gIthai said that, “of all the letters, I am “a”. This is why thiruvaLLuvar said that “agara mudhala ezhuthellAm Adhibhagavan mudhaRRE ulagu”. The l

The letter / name “a” (अ or அ) denotes only Sriman nArAyaNan. The root / origin (daathu) for it is (अ or அ) = “ava rakshanae”, that means “One who protects”. There is a separate section in Vedas that talk in more detail as to why “a” (अ or அ) represent Sriman nArAyaNan only and no one else and also why only HE can be the lone protector and no one else can. It talks about “sAmAnAdhikaranam” logic which we will not go through here. But let us try to understand it in much easier and simpler terms. Sriman nArAyaNan is the cause of all causes (primordial cause). This has been proved by azhwar’s pasurams, Vedas, Upanishads and what not. He is the source of all objects, both finite and infinite, conscious and non-conscious. There is nothing in the universe that was not born without HIM or without HIS connection. Similarly, in the phonetic scheme of things, the letter “a” (अ or அ) is present in all other letters in one form or the other (explicit or implicit).

For example, in Thamizh if we look at the word “ப”, it is a break of “ப் “+ “அ”. If we consider “கி”, we can break it up into “க + இ”. Now if we further break the “க” in it, we get “க் + அ”. Thus, the letter “கி” would be like this: “கி = க + இ = க் + அ + இ”. The presence of “அ” is implicit. While, in some cases it is implicit, in some others they may be explicit. But whatever may be it, “அ” is present in one form or the other. It is the source of all letters / words / sounds, just like Perumal is the source of all objects. Swami Nammazhwar says in his Thiruvaimozhi, “karandhengum parandhuLan” and “karandha silidam thOrum idan thigazh porul thOrum”. He is present in each and every entity. It is like seeing ghee inside milk. It is there but not visible to us at this point of time. But the presence of ghee in milk cannot be negated at all. Thus, the letter / name “அ” and Perumal are similar in the manner that it is from these that all the others have been born out of. So “அ” denotes Perumal only and no one else.

kambanAttAzhvAn, in his kadimaNap padalam of bAla kAndam, said “bhU magaL poruLum ena”. This would mean that if we were to refer to something that is so intertwined in its very existence, its meaning automatically gets explained. Likewise, if we just say “a”, its meaning, i.e., “perumAL” is explained automatically.

mavvAnavar ellAm: The word “ma” would refer to the entire gamut of all souls. That would be the meaning for the word “ma”. SAsthra say that “ma” kAram always point to an object that has conscience. Even though it says “an” object and thus means singular soul, it is a collective noun in the sense that it includes everything. To give an example to this, if we say “this is one paddy seed”, we do not mean that there was only one paddy seed. We mean the fact that there was only one kind of a paddy seed. So the singularity is for the type count and not for the unit count. Likewise, “ma” would include all souls that has conscience. The souls can be classified into three types. (a) those that gets birth inside a body again and again due to karmA, (b) those that gets liberated from this kArmic cycle of rebirths by perumAL’s causeless cause and (c) those that never get affected from karmA and are always in unison with perumAL. These three are referred to as “baththar”, “mukthar” and “nithyar” respectively. All these three are collectively referred by this one word “ma”.

uvvAnavar: The word “uvvAnavar” would refer to the person who is the meaning of the word “u”. “ukAram” describes an AchAryan. SAshtrAs says that the direct meaning of “u”kAram would be periya pirAtti Sri mahAlakshmi. She is someone who acts as a common connection between a soul and perumAL and ensures that they get united. In an exactly similar fashion, it is an AchAryan who unites a soul with perumAL Sriman nArAyaNan. Since the actions of pirAtti as well as AchAryan are both the same, “u” kAram denotes AchAryan too. In addition, an AchAryan has bhakti towards pirAtti and earns her affection. AchAryan ensures that, those who take surrender at the lotus feet of one’s AchAryan, gets her affection as well which would eventually get the love and affection of perumAL. Since, both AchAryan and pirAtti perform a recommendatory role for the eventual action of getting the love of perumAL towards a person, an AchAryan is referred by “u”, the very same word that means “pirAtti”.

adimai enRu uraiththAr: These souls eternally serve as servants to their eternal master who is being referred as “a” (sriman nArAyaNan). The relationship that exists between a “ma” and “a” is a “MASTER-servant” one. This relationship is being shown to “ma” by an AchAryan who is the mediator. Only when an AchAryan (represented by “u” here) shows the sishya (who is represented by the word “ma” here), the relation, latter gets to know of it in its fullest sense. Thus the phrase “avvAnavarku mavvAnavar ellAm uvvAnavar adimai enRu uraiththAr” goes ahead to show that an AchAryan shows / reveals the “MASTER-servant” relationship between perumAL and the soul. There is story to illustrate the relationship that can be seen in thiuvAimozhi Edu vyAkyANam.

Once upon a time there was a trader who occupation was to go place and earn money by trading. His wife was pregnant. One day, he left home, crossed sea and reached another country for business. Before he left, he told his wife that it may take some time for him to be back home and that she should teach “trade” to their yet to be born son. She delivered a boy after some time. The boy grew up into a youth, learned the art of trading. It was time for the son to involve himself in overseas trading. Incidentally, he ended up in the same country where his father landed. He started to do trading there in that country. One day, there erupted a fight between the father and the son who were now sharing the same port of trading. The fight was about some business rules. Seeing the fight, a lot of people assembled to see what is going on with these two people. Among those group of people, there was an old man who knew both (father and son) of them. Seeing the fight, the old man said, “Hey guys!!! Look!!! Why are you fighting between the two of you? You are the father and you are his son”. He united these two by informing the relationship between them. After this, both father and son reconciled. In fact, their happiness knew no bounds once they knew the true relationship. Thus, the AchAryan is the mediator between a person and perumAL. The relationship is not being created by anyone. It is being there forever. In the story, the old man did not create a new relationship, rather he just reminded them of the existing relationship. The one point about this story is that while in the story the father was oblivious of the fact that he is the father, in actuality, perumAL is never oblivious of anything. HE just reincarnated in a human form as AchAryan, so that a person can go unto him easily and surrender.

Thus, an AchAryan is someone who serves as a mediator between a person and perumAL. He reveals the “MASTER-servant” relationship between them. An AchAryan reveals more about perumAL to a person. He says that a perumAL is the one and the only one who is a mother, father, relatives and everything else to a person. On the other hand, this same AchAryan tells perumAL that this soul (person) is someone inseparable from HIM and that HE should forgive his sons and take him unto HIS lotus feet. An AchAryan liberates a person by doing this. This is what an AchAryan does to a person and is being celebrated in this pAsuram.

ivvARu kEtirupARkku: This refers to the group of people who had listened to these aforementioned concepts of “a”, “u” and “ma” from their AchAryan and stood by it. Thirumanthiram has in itself the name of perumAL as “nArAyaNA”. This name can be split into “nAra” and “ayana”. One’s AchAryan explains to his sishyAs about the relationship between “nAra” and “ayana”. “nAra”, simply put is about the soul and “ayana” is about perumAL sriman nArAyaNan. AchAryan advises that the soul is always subservient to its eternal master sriman nArAyaNan. After listening to this advices, the sishyAs lives a life abiding by it.

AL enRu kaNdiruppAr: There are few persons who serve such sishyas described in the previous paragraph. These person treat these sishyas as everything for them. The first level is to be a servant to perumAL Sriman nArAyaNan. Extending this logic would mean that the servant does everything that his master sriman nArAyaNan likes. HIS like is nothing but a person be a servant to HIS devotees forever and do kainkaryam to them. Hence, the last level is for a person to be subservient to the devotees of sriman nArAyaNan. This is what is explained by this particular phrase “AL enru kaNdirupAr” in this pAsuram.