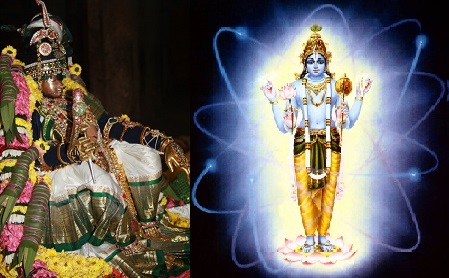 AzhwAr having enjoyed emperumAn (who is unlimitedly beautiful, being complete in all auspicious qualities) within his heart just like physically enjoying him, desiring to enjoy him physically, attempting for that, sees that it is not happening and becomes greatly distressed and starts speaking as someone else about his own situation. AzhwAr assumes the mood of a  beloved girl who is of the nature of feeling joyful on union with bhagavAn and feels distressed on separation from him. While in separation, she [AzhwAr in feminine mood] starts seeing other entities and their activities. She considers that such entities too are suffering in separation from bhagavAn and tells such entities “You too are suffering like me”.

In the first decad, AzhwAr mercifully starting to explain about bhagavAn‘s enjoyable nature, meditates upon his qualities which reveal that enjoyable nature such as sriya:pathithvam (being the master of srI mahAalakshmi), sEshasAyithvam (resting on Adhi sEsha), anishta nivarthakthvam (having the ability to eradicate unfavourable aspects), nivarththana parikaravathvam (having the tools for such eradication), sakthiyOgathvam (having the power),  sathyavAdhithvam (being truthful), sambandha visEshavathvam (special/eternal relationship with all), kAruNikathvam (compassion), gamanIya vigraha yOgam (having bodily beauty which attracts all) and kAraNathvam (being the cause of all). On meditating so, AzhwAr reveals the heart of a beloved girl who is in separation from her beloved (bhagavAn). She sees many entities and thinks that they too are suffering in separation from bhagavAn like herself and feels sorry for them too.

In the previous decad, AzhwAr explained emperumAn‘s saulabhyam (easy approachability), mEnmai (supremacy) and vadivazhagu (bodily-beauty) in “maNiyai vAnavar kaNNAnaith thannadhOr aNiyai“. Even one of these qualities is enough to become attracted and follow him – what to speak when all these three qualities are seen together? Desire to enjoy such aspects physically arises in AzhwAr. But since AzhwAr‘s desire did not get fulfilled, AzhwAr became distressed and in the mood of a consort of emperumAn who is in separation, goes to a garden to cheer herself. Seeing the activities of the objects in the garden, she understands those to be suffering in not uniting with emperumAn and sings about their suffering too.

Even in thiruvAimozhi 1.4 “anjiRaiya madanArAy“, AzhwAr went through similar emotions. AzhwAr desired previous to that in thiruvAimozhi 1.3.10 “peru nilam kadandha nalladip pOdhu ayarppilan alaRRuvan” (I will incessantly cry out to see the lotus feet which measured the worlds). At least in that case, he could console himself saying that the thrivikrama charithram happened in previous yugams and it is not possible to see the same. Here, “ugandharuLina nilangaL” (dhivya dhEsams) are present for the benefit of those who take birth subsequent to various incarnations (in previous yugams). AzhwAr is deeply distressed that his desire to unite with emperumAn in dhivya dhEsams as said in thiruvAimozhi 1.10.9 “nambiyaith thenkuRungudi ninRa” is not fructified. In “anjiRaiya madanArAy“, AzhwAr could hold himself up even to send messengers. Here, considering that even such messengers are suffering in separation, he suffers for them too.

AzhwAr‘s distress is deep due to his own nature too. Up until thiruvAimozhi 1.3 “paththudai adiyavarkku” decad, AzhwAr‘s distress is limited since he just experienced bhagavAn‘s nature and became separated. But from thiruvAimozhi 1.4 “anjiRaiya madanArAy” to now, AzhwAr deeply enjoyed his qualities and became separated – so his distress/sorrow is very deep now. The more we engage in bhagavath vishayam, the more tasteful it becomes.

It is natural for

But, AzhwAr, not realising that it is natural for these entities to have such qualities, considers them to be suffering in separation from bhagavAn and feels sorry for them as well.

In this thiruvAimozhi, AzhwAr‘s distinction from iLaiyaperumAL (lakshmaNa) is highlighted. How so? lakshmaNa established that fish sustains itself in water. But AzhwAr feels that the fish, water and himself (everything) are sustained by bhagavAn‘s auspicious qualities. Just like when people are in distress, they  find others who are also in distress in the same matter, hug them and cry out with them to console themselves, parAnkusa nAyaki (AzhwAr) too, is seeing all the entities which are visible to her and cries out with them saying “we are going through the same suffering”. Separation from bhagavAn is so difficult to handle even for animals, plants etc., as stated in srI rAmAyaNam ayOdhyA kANdam 59.4 “…api vrukshA: parimlAnA:…” (Even the trees have dried up due to separation from srI rAma). As said in srI rAmAyaNam ayOdhyA kANdam 59.5 “upathapthOdhakA nadhya: palvalAni sarAmsi cha…” (even the rivers, ponds and streams became very hot and unapproachable due to the suffering in separation from srI rAma), water-bodies irrespective of being small or large, became unapproachable due their heat which was caused by separation from srI rAma. As stated in the same slOkam “parisushkapalAsAni vanAnyupavanAni cha“, even the forests and sub-forests became very hot due to anxiety out of separation from srI rAma.

Like srI rAma did upon hearing the death of his father, chakravarththy dhaSarath, as said in srI rAmAyaNam ayOdhyA kANdam 102.4 “sIthE mruthasthE svasura: pithrA hInOsi lakshmaNa” (Oh sIthA! your father-in-law passed away; Oh lakshmaNa! you have lost your father), AzhwAr too cries out for emperumAn [along with the objects he sees in the garden].