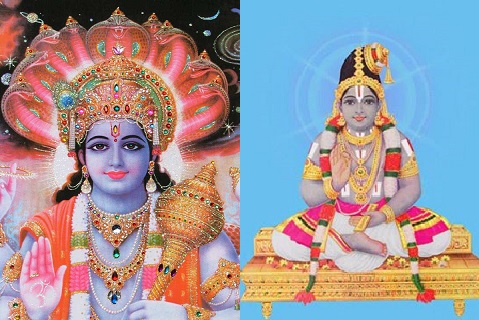 In sixth decad – nammAzhwAr censures those who worship emperumAn but desire ulterior benefits from bhagavAn who is the supreme master, divine consort of srI mahAlakshmi, abode of all auspicious qualities, being complete in infinite bliss, one who is capable of transforming his devotees to have more bliss than he has. AzhwAr becomes ecstatic thinking about emperumAn‘s quality of bestowing their desired results (though they don’t want him) and explains that devotion towards such emperumAn is the most enjoyable aspect.

In sixth decad – AzhwAr explains the following aspects considering that even if emperumAn is easily worshiped, he is also most enjoyable to establish his relishable nature.

Thus, AzhwAr explained the enjoyable aspect of surrendering unto emperumAn.

In  bhagavath gIthA 9.3, emperumAn says “asradhdhadhAnA: purushA: dharmasyAsya paranthapa | aprApya mAm nivarthanthE mruthyu samsAra varthmani ||”  (Oh arjuna who can destroy the enemies! Those who have no faithful desire in this upAsanA (path of devotion), instead of reaching me, return to this material realm which causes death (again and again)). bhagavAn said “asya dharmasya” because it (devotion towards him) is most dear to him as well. “aprApya mAm nivarthanthE” – when I am eagerly waiting to remove their hurdles and lead them to the best path, they seek out self-destruction in this material realm.

nampiLLai then quotes bhagavath gIthA 9.2 “rAja vidhyA rAja guhyam pavithramidham uththamam | prathyakshAvagamam dharmyam susukam karthumavayayam ||” (This knowledge (about brahmam) is the top most of all knowledge; best; pure; can make me manifest to your external senses; means for liberation; can be practiced joyfully; imperishable).

bhagavAn is sriya:pathi (divine consort of srI mahAlakshmi), being the abode of all auspicious qualities, being the master of all jIvAthmAs, being the one who blesses bliss to those who approached him as explained in thaiththirya upanishath Anandhavalli “Esha hyEvAnandhayAthi” (this paramAthmA gives bliss to jIvAthmA). The bliss acquired by jIvAthmA during/after liberation is due to (being permanently connected to) him only. Since our surrender is also towards him, that is also blissful. Though, this is blissful from the time of approaching emperumAn, how can some people pray for ulterior benefits and leave him? This way AzhwAr censures those kEvalars (ones who are situated in kaivalya nishtai [enjoying oneself after being liberated] instead of bhagavath nishtai [serving bhagavAn]) and since he sustains himself by the sweetness of being surrendered to emperumAn, he completes the decad explaining the enjoyable nature of surrendering to emperumAn.