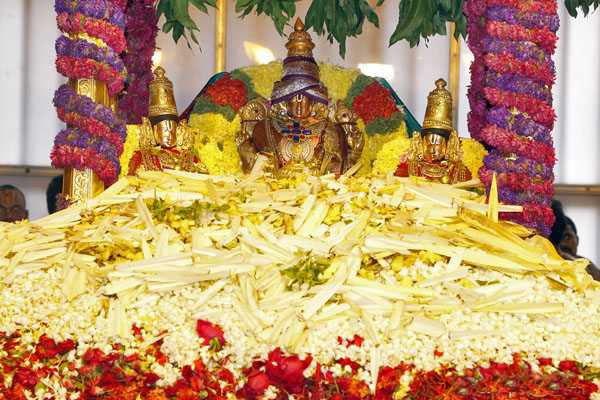 In the ninth pAsuram – AzhwAr requests the cool wind: after informing emperumAn “Can you let your subservient person die down like this?” if he still ignores me, you should surely put me to my end.

Subsequently, parAnkusa nAyaki looks at the cool wind which returns from emperumAn to finish her unlike previous occasions and tells it “After informing him who is naturally related to me, you can come and harm me”.

Ninth pAsuram – When parAngusa nAyagi was thinking as in (the previous pAsuram) “sAyalodu maNi mAmai thaLarnthEn nAn” (I have become tired losing my colour, lustre etc), a cool wind touches her body. Seeing its nature, she thought that there is something to it, just like thArai said “sugrIva was struggling till a little while ago being beaten up by vAli – but the same sugrIva has returned with a great roar – there must be something to it (i.e., having the support of srI rAma))”. When a king sends his servants to torture those who disobey (or defame) the king, those persons may try to give some wealth etc to the servants to avoid the torture. In the same way parAngusa nAyagi tells the cool wind “you go and inform him about my plight and if he does not care about my offerings, then you can return to put me to my end”.

Udu – In between (emperumAn and me)
Adu – occurring/travelling
pani vAdAy – Oh cool wind!
nAdAdha – rare (difficult to find)
malar – flowers
nAdi – seek out
nAL thORum – daily
nAraNan than – unto nArAyaNa (who has eternal relationship with everyone as master)
vAdAdha malar adik kIzh – unto the fresh lotus feet of emperumAn
vaikkavE – on offering
vagukkinRu – engaging (the senses)
vIdu – in separation
Adi – occurring
vIRRiruththal – being alone
vinai aRRadhu – unfortunate situation
en seyvadhO – what is the result of it?
uraiththu – telling him (and if he gives unfavourable answer)
enadhu udal – my body
IrAy – kill it so it does not exist

Oh cool wind which is travelling in between emperumAn and me! While I should be offering rare flowers unto his lotus feet daily and engaging my senses in the same, my unfortunate situation is such that I am living alone in separation from him. After informing this to him and if you do not get positive feedback, please  finish my body. vIdu here means separation. From this, we can understand that if the AchArya is harmful to us due to some reason, he is still worshippable by us since he is the one who will deliver us.