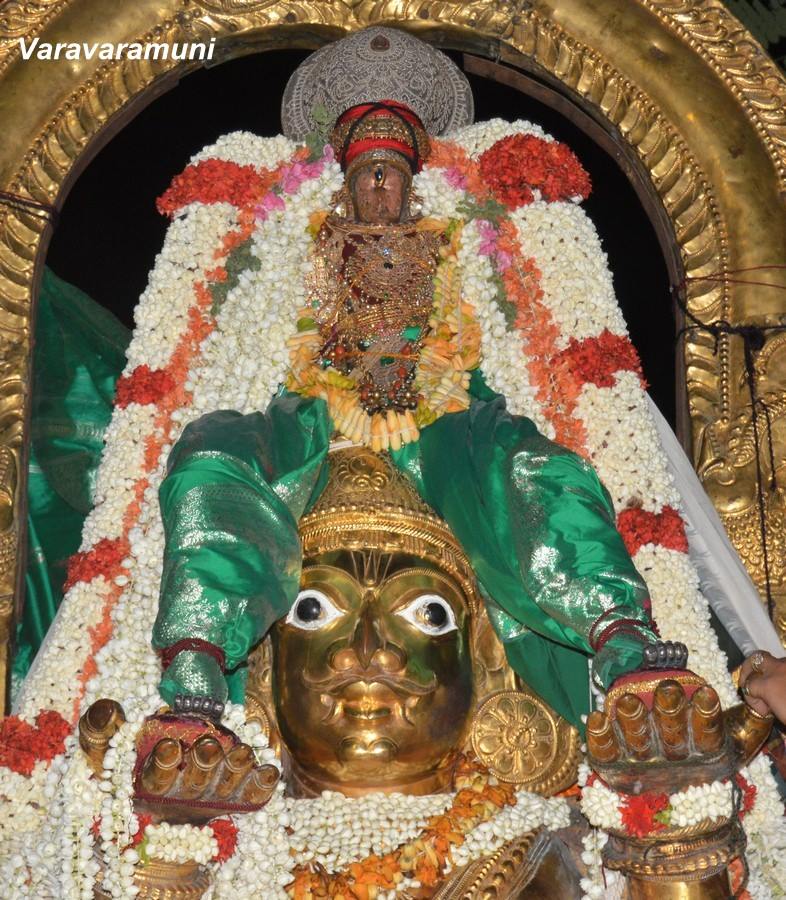 Though emperumAn is ready to forgive the mistakes of everyone and protect them all, if he is not willing to forgive parAngusa nAyagi (who is special unlike anyone else) and mix with her and thereby not wanting to manifest his kAruNyam (compassion) etc., what can we tell him?

If emperumAn feels “If I mix with persons who are with offenses my reputation/greatness will be minimized – even if my nArAyaNathvam (being the protector of every one) becomes questionable, that is fine” – parAngusa nAyagi requests a beetle (bumble bee) to go “I will suggest an idea that will not cause any damage to his reputation – you ask him to do like that” .

Subsequently, parAngusa nAyagi tells a beautiful, radiant beetle (bumble bee) “Give a message to sarvEsvaran who has beautiful chakram in his hand”.

Previously, parAngusa nAyagi said “Even if you don’t want to eliminate our sufferings in separation, at least ensure that your nArAyaNathvam is not challenged”. For that, emperumAn replied “Even if my nArAyaNathvam is challenged, I do not want to be accused of mixing with unqualified persons”. Understanding this, parAngusa nAyagi requests a beetle “There is a way where he does not get accused of mixing with unqualified persons yet ensuring we sustain ourselves; he can take a stroll for a sport or to protect an elephant (gajEndhran) etc; at such times, if he passes through our streets, that will not hurt his reputation. We would also sustain ourselves by seeing him through the window. Since this is possible, ask him to do that”.

Azhi – circle shaped
vari vaNdE – Oh beetle that has stripes in your body!
aruL – Having mercy more than emperumAn himself
Azhi – having chakkaraththAzhwAr (sudharSana chakram)
ammAnai – that master
kaNdakkAl – on seeing
aruLAdha nIr – You who have vowed not to show your mercy on parAngusa nAyagi since she has committed many sins/mistakes
aruLi – breaking such sankalpam and showing compassion once
avar – her
Avi – AthmA  (soul)
thuvarAmun – Before her existence dries up
aruLAzhi – ocean of mercy
puL – periya thiruvadi (garudAzhwAr)
avar vIdhi – In the street where she resides
oru nAL – at least one day
kadavIr enRu – take a stroll like you did to protect gajEndhrAzhwAn
idhu solli aruL – please tell him this
yAmum – (If you don’t come) we,
en pizhaiththOm – what mistake was committed?

Oh circle shaped beetle who has stripes on your body! When you go and see the master who has sudharSana chakram (who is even more merciful than emperumAn himself) in his hand, please tell him “Oh you who have vowed not to show your compassion on parAngusa nAyagi since she has committed many sins/mistakes! You break your vow and show your compassion once by taking a stroll on the street where she lives on garudAzhwAr (who is an ocean of mercy) at least one day – before she loses her existence”. If he refuses to do so, she would wonder “What mistake did we commit that he does not even pass by our street?”.