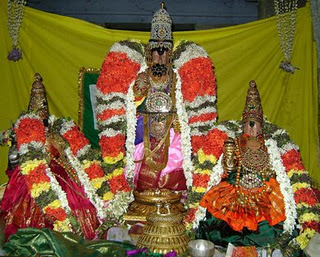 In the second pAsuram, parAngusa nAyaki speaks about what some cuckoos would tell on her behalf to emperumAn.

Subsequently, since there are lot more cuckoos (a group of them) which can accomplish her objective, she requests some of those to go to her puNdarikAkshan (lotus eyed lord) on her behalf as a messenger.

Previously, parAngusa nAyaki requested some cranes to go as her messenger. Now, she explains to cuckoos what to convey when they go there. She started with cranes but ended with cuckoos. This is how much bewildered she is. That is the greatness of bhagavAn from whom she is separated now. When someone who is separated from worldly matters/experience, they get quite upset and bewildered – if that is the case for normal matters, how much bewilderment one should have when separated from the most distinguished bhagavAn. If bhagavAn does not bewilder her like this, that would be an insult to his most auspicious qualities.

inakkuyilgAL – Oh group of cuckoos!
nIr alirE – don’t you who have beautiful voice?
en – for me whom he became bound to
seyya – reddish
thAmarai – like a lotus
kaN – having eyes
perumAnArkku – one who is greater than every one else (unreachable for me)
en thUdhAy – being my messenger
uraiththakkAl – if you speak
en seyyum – what is wrong?
mun seydha – previously committed
muzhu vinaiyAl – complete sins
thiruvadik kIzh – at your divine feet
kuRREval – confidential service
seyya – to perform
mun – previous
muyalAdhEn – me who did not engage in any means
inam – still
agalvadhuvO vidhi – Is staying away the right thing to do?

Oh group of cuckoos! Isn’t it true that you who have beautiful voice!?When you speak on behalf of me (whom he is bound to) to the greatest lord who has beautiful reddish eyes, what is wrong with that? Due to my previously committed sins, I did not try to perform confidential service at the lotus feet through any means, but still should I stay away? Is that the right thing to do? Here the sweet speaking ability of the AchAryas and their presence in groups is indicated.

bhattar was staying in thirukkOshtiyUr and there were two sishyas of his who were also present there at that time. They were named theRkAzhwAn and kOLariyAzhwAn. kOLariyAzhwAn is very focused on AchAram (following disciplined lifestyle according to vaidhika dharmam).  theRkAzhwAn is more lenient on the AchAram. Once on a festive day, when they both met, kOLariyAzhwAn asks theRkAzhwAn “Won’t you take a holy dip at least today?” theRkAzhwAn replies “my sins are so huge that such holy dips are not helpful. Only emperumAn‘s sudharsana chakra has the ability to destroy my sins. So, what is the use of such holy dip then?”. bhattar overheard this and thought “I underestimated theRkAzhwAn based on his AchAram, but he is really knowledgeable” and felt blissful.