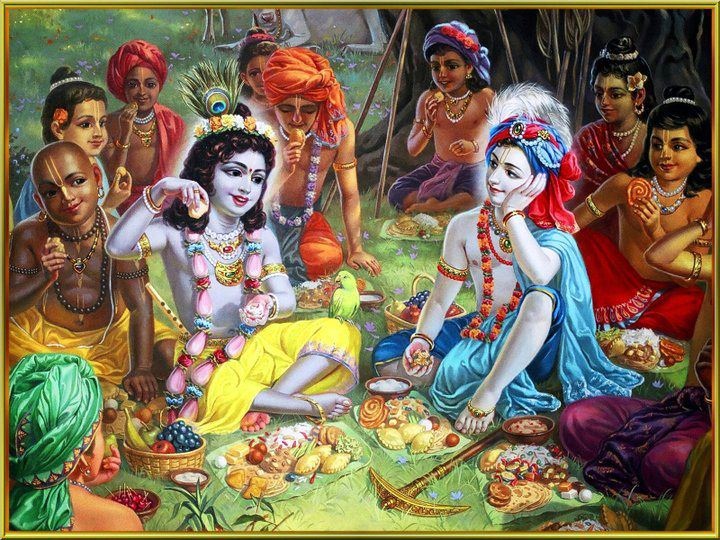 If we approach emperumAn, would he accept us?  Is he not the supreme lord (too high to consider engaging with us)?

Would ISwara who has many distinct followers accept some one like us who is just approaching emperumAn now?

Even if we give up everything and approach him, since he is sarvESvaran (supreme lord), would he acknowledge us? Considering his easy mingling nature with everyone, even his supremacy will look like vandhERi (accidental – acquired) for him.

In the previous pAsuram, nammAzhwAr explained remedy for internal hurdle. When asked “Since he is explained as the one who has no unfulfilled desires and the master of everyone, would he be attainable by us?” AzhwAr replies “He is already naturally interested in engaging with others”.

Isanum – Even though he is sarvESvaran (supreme lord)
paRRu ilan – he is not attached to his divine consorts, nithya sUris et al who are already attached to him
muRRavum – attached fully as dhAraka (sustaining), pOshaka (nourishment), bhOgyam (enjoyment) etc to us who are newly approaching him
ninRanan – firmly stood
paRRu ilai Ay – you too, giving up worldly attachments
avan – towards him
muRRil – his qualities of being dhAraka (sustaining), pOshaka (nourishment), bhOgyam (enjoyment), etc.
adangu – be immersed

Even though he is sarvEswaran, giving up attachments towards his divine consorts, nithya sUris et al who are already attached to him , he firmly stood attached fully to us (who are newly approaching him) considering us to be that which sustains him, that which nourishes him and that which gives him pleasure. You too give up worldly attachments and become immersed in him considering his qualities of being dhAraka (sustaining), pOshaka (nourishment), bhOgyam (enjoyment) to us.

It is also explained as – Even though being sarvESvaran, he is having attachment towards us and standing firmly on that as explained in bhagavath gIthA 9.24 “samOham sarvabhUthEshu” (I am equal to all entities). You too become firmly attached towards his true nature, auspicious qualities, forms, activities etc.

Even though he is sarvESvaran, whoever approaches him, he will manifest friendship. So, you too approach him with friendship and serve him by all means.

nampiLLai also highlights bhattar‘s explanation which is also most elegant. 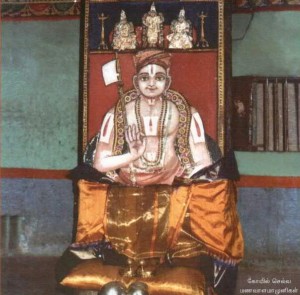 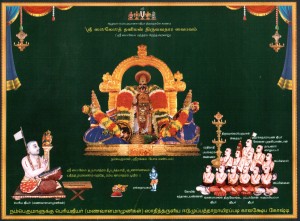