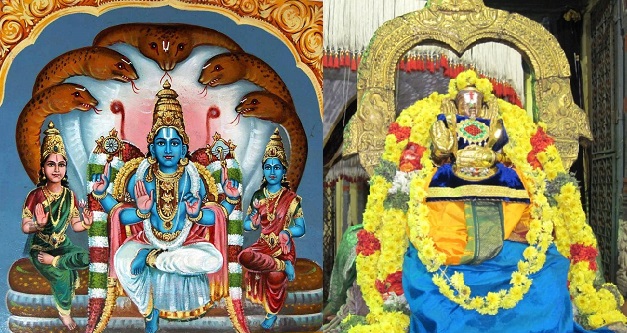 nammAzhwAr, after enjoying emperumAn‘s parathvam (supremacy), being blissful, as explained in bhagavath gIthA 10.9 “bhOdhayantha: parasparam” (discussing with each other) – one cannot bear without discussing with others about these divine matters, realises that there is none  qualified to have discussion with him. nammAzhwAr contemplates the method to reform worldly people and share these divine matters with them. He realizes that “chEthanas (sentients  – ones with knowledge) usually reject/avoid unfavourable aspects and accept favourable aspects. Similarly, let me highlight what is unfavourable for them in this samsAram and the enjoyable nature of bhagavath vishayam and reform them”. He instructs them about the temporary and insignificant nature of this world and the pure bhagavAn who is filled with auspicious qualities and instructs them to pursue bhakthi yOgam [path of devotion] to worship him.

nammAzhwAr mercifully explains the process of worshiping emperumAn through parOpadhEsam (instructions to others) in this decad. Since emperumAn is the sarvasmAthparan (most supreme) and he is to be worshipped, aspects which are considered as hurdles in his worship are to be given up. AzhwAr explains how such unfavourable aspects are to be given up. He also explains the insignificant nature of worldly matters and the glorious nature of bhagavAn. He also explains how the hurdles are removed and the true goal is accomplished.

mOksha sAsthram has 2 aspects – thathvam (truth about the entities) and upAsanam (process to achieve mOksham). In the first decad, thathvam is explained clearly. This decad is the summary of upAsanam related aspects.

thirumAlai ANdAn explains this decad with respect to prapaththi as heard from ALavandhAr. emperumAnAr too was doing the same until he completed srI bhAshyam (commentary from vEdhAntha/brahma sUthram). Subsequent to completion of bhAshyam (to present consistent views between vEdhAntham and thiruvAimozhi), he started explaining this decad with respect to bhakthi yOgam. embAr too followed the same principle.

nammAzhwAr was fully blessed by emperumAn with blemishless knowledge and he in turn performs saraNAgathi to emperumAn in various pAsurams. So, his bhakthi itself was blessed by bhagavAn and his bhakthi is something which is part of the goal (to perform kainkaryam one needs devotion – that devotion/desire is AzhwAr’s bhakthi which was blessed by bhagavAn himself). bhakthi is explained as being supported/decorated by karmA (activity) and gyAnam (knowledge) – i.e., by following the process of karma yOgam and gyAna yOgam, one’s mind gets purified and engages in bhakthi yOgam. But for AzhwAr, bhagavAn‘s mercy takes the role of karmam and gyAnam.

From the above, it is concluded that nammAzhwAr is instructing the same sAdhya bhakthi  (which he received from bhagavAn out of his unconditional grace) to others.

A few questions arise on why he is instructing to others after fully experiencing bhagavAn in the previous decad.

His teachings are the outcome of his own overflowing blissful experience. bhagavath vishayam is not to be enjoyed alone. He seeks out for good companions to share this blissful knowledge and only finds samsAris (materialistic persons). Just like he was attached to bhagavath vishayam, samsAris were attached to worldly pleasures. He could not bear the suffering of samsAris and desperately wants to remove their sufferings. nanjIyar often explains “if one has vaishNavathvam (vaishNava quality), he himself will know that. When he sees others sufferings and suffers for that he can consider himself to be a vaishNava. When he sees others sufferings and feels ‘let them suffer’, he cannot consider himself to be a vaishNava”.

To uplift them, AzhwAr explains the limitations of wordly pleasure and benefits of bhagavath vishayam. Realizing that, he explains insignificant/temporary nature of worldly pleasures and the eternal/glorious nature of bhagavAn, bhagavAn‘s relationship with jIvAthmAs are not something new and it is always there for every jIvAthmA, the manthram that is to be pursued for such persons who realise bhagavAn, his most worshippable nature and finally the need for detachment towards worldly pleasures and surrendering to emperumAn.