An AchAryan (guru)’s glories were discussed in detail in the previous pAsurams. A person catches hold of his AchAryan’s lotus feet and treats it as everything in his life, after realizing his significance. If a person is able to understand the stature of such a person (sishyAs) who had caught his AchAryan’s feet, he must be really intelligent. People who does not understand the glories of a person who treats his AchAryan as everything, would say, “Well, why would he go after his AchAryan as everything. Why does he consider him greater than even sriman nArAyaNan? Why does he wander after all behind his AchAryan?” Whatever may be the complaints that these people say, this pAsuram answers those questions. In the very questions that these people pose, there is an implicit point imbibed in it. There is a group of people who are behind sriman nArAyaNan after listening to HIS glories, form, divine qualities, reincarnations, stories etc., If these people who go after perumAL ask those other set of people who go after their AchAryan as everything as to, “Why do you folks not go after the supreme lord and go behind just a mortal human being called as “AchAryan”? This pAsuram answers these probable questions from these devotees of perumAL HIMSELF. Any blasphemy on the part of worldly people about these guru bhakthAs and the questions imposed by the perumAL devotees are in fact to be treated as glories rather than complaints/scolding. This particular grammatical structure is known as “vanja pugazhchi aNi” in thamizh.

We can look at an example to this. Once upon a time, during the times of svAmi rAmAnujA, there were lots of people standing near the punnai tree in srirangam. svAmi rAmAnujA was also standing there with other people, waiting for perumAL’s procession to start. svAmi rAmAnujA was standing near perumAL. Lots of devotees came towards svAmi rAmAnujA and prostrated before svAmi rAmAnujA and went. There was a cholA poet who served as poet in the kingdom. His name was “udayAr subramanya bhattar”. He was watching this with curiosity. With a willingness to know the reason for this, the poet went towards svAmi rAmAnujA and asked, “Hey! jIyarE! I want to know something from you”. svAmi rAmAnujA replied, “yes. Please go ahead with what you wanted to ask”. The poet replied, “I do see that there are lots of people who come towards you and prostrate before you. They seem to relish doing this and you, who is standing right besides perumAL, do not oppose them and seem to gladly accept their prostration. You never seem to hold them off from prostrating. Why is it that you do not say anything against them when they prostrate before you”. svAmi rAmAnujA replied, “Well, this is a question that needs to be asked. It is a very good question. But I am astonished by the fact that this is coming from you”. The poet was little perplexed and said, “What is so great about me”? svAmi rAmAnujA answered, “well, you are doing royal service. There are lots of people who come to your king. If there is something that a person wants from the king, he would take the king’s sandals and keep them on his own head and would honor him. The king would knew that the other person is keeping the sandals on his head to honor him and is an act of pleasing the king on his part. Knowing this, the king would ensure that the person is guaranteed of his wish, whatsoever it may be. Does this mean that it was the sandals that did the job for that person? It is only the king that does the job for the person and not the sandals. You have seen this incidents a lot of times when you were in the kingdom. Similarly, here, perumAL is the king. Adiyen is like perumAL’s sandals. People who want anything from perumAL, try to please perumAL by prostrating before me who is serving like sandals to HIM. perumAL ensure that HE does the job of those who express their love and affection towards me. That is why they prostrate befoe me. The poet “udayAr subramanya bhattar” was flabbergasted to learn such a treasurable meaning from svAmi rAmAnujA himself.

Thus, it can be seen that there is a possibility that those who are bhagavath devotees (devotees of sriman nArAyaNan) may condescend those people who have AchArya bhakti. The former group of people need to understand about the greatness of devotees of AchAryA. Even if they fail to understand and start condescending the AchAryA devotees, it will only go ahead and prove the greatness of AchAryA devotees. 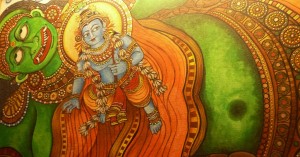 alagai mulai suvaithArkku: The word “alagai” refers to a demoness. Even thiruvaLLuvar says “vayyathul alagayyA vaikkapadum”. “alagai” refers to pUthana, the demoness who came under the guile of yashOdha. She was been sent by kamsa inorder to kill krishnA who was growing at thiruvAipAdi. pUthana tried to kill krishnA by feeding HIM with poisonous milk in her breast. krishnA not only sucked the milk but also sucked her life along with HIM. This story is illustrated in a lot of places. For example, thirumangai azhwar uses the phrases, “peRRA thAi pOl vandha pEychi peru mulaiyUdu uyirai vaRRa vAngi unda vAyAn” and “kaNN sOra vengurudhi vandhizhiya vendhazhal pOl kUndhalALai maNsOra mulaiyuNda mAmadhalAi”. svAmi nammAzhvAr says “vidapAl amudhAga amudhu seydhitta mAyan”. This story is taken here to say that the devotees immerse themselves in the glorious feet of krishnA.

anbar adiku anbar: The devotees who gets immersed in these stories of krishnA. pUthana came to kill krishnA. HE killed her. Those who think of this story, think about HIS special quality. krishnA killed pUthanA, and thereby not only killed her but also saved HIMSELF who is the causeless cause and root of this world. Had HE not killed her, would krishnA be there for us? What is this great quality of krishnA whereby HE always makes HIMSELF available for HIS devotees. In order to do that, he kills all the demons. The devotees think of HIS quality and deeply immerse themselves in it

ulagar pazhi thURRil thudhiyAgum: When a layman comments on a person who is a devotee’s devotee as “Look at this person. He is going behind another person (devotee of perumAL) without knowing the roots of that person. He does not know his caste, his current situation etc. He is simply following this person and treats him as the object of attainment and thereby ignoring perumAL”. If this was the negative comment, then this infact is not a negative comment / complaint or a blasphemy, rather, it goes ahead to prove the diving qualities of that person who regards his AchAryan and other bhAgavathAs as his everything. Hence, these are not bad comments and complaints, instead they are noteworthy praises.

thURRAdhu avar ivarai pORRil adhu punmayEyAm: Now let us consider the flipside of the coin. There is a possibility that these laymen may heap loads of praises on these devotee’s devotees. Does it really mean a praise in the first place? If not, what does it mean? These laymen does not do any kind of things that they are supposed to do in the first place. They do it superficially or not do it at all. On top of it, they comment on those people (devotee’s devotee) after observing a few of their routine tasks superficially and comment as in “These people do abide by the shAsthrAs”. They utter these comments based on superficial observations and so does not mean anything. They say these just because they think that other people should think about them that they are also people with compassion towards others and show respect on others. However, the fact of the matter is that, people with such superficiality how much ever they praise, it would never match the glories of those devotee’s devotees. Rather it would only back fire and considering their stature, it would be just an insult.

adiyArkku adiyAr: The entire group of devotee’s devotees are the peak of glory for the entire world. They can also be termed as “thilakam” for devotees themselves. If the worldly people were to complain about them that they do not go behind perumAL and instead go after a human being, then that is not a complaint. It is just a praise. Thus, we saw the significance of being a devotee’s devotee.

We can see more example to this. svAmi thiruvarangathu amudhanAr served the devotees of svAmi rAmAnujA and wrote the book “rAmAnuja nURRandAdhi”. Likewise, similar instances could be seen in svAmi parAsara bhattar and nanjIyar’s live history.