The concept of “AchAryan’s glories and significance” was dealt in detail from pAsuram 26 (thappil guruvaruLAl) through 37 (poruLum uyirum). In the 26th pAsuram, svAmi aruLALa perumAL emberumAnAr described the condition of a person who had done sharanAgathi to the lotus feet of sriman nArAyaNan, with the help of his AchAryan. This person goes to paramapadham and serves the LORD and his devotees forever. In the next pAsuram (27th), svAmi aruLALa perumAL emberumAnAr talked about those who does not do sharanAgathi and described their state as miserable as they would dwell in this materialistic world forever. In the 29th pAsuram, he talked about a person who has got the grace of his AchAryan, would cross this ocean of miseries, break the shackles of birth and death and would reach paramapadham eventually. In the 30th pAsuram, he discussed about how our scriptures (shAshtrAs) prohibits us to have any form of relationship with persons who does not respect his AchAryan. The 31st pAsuram talks about how vEdhAs talk about one’s AchAryan’s lotus feet is the sole refuge for a person. In the 32nd pAsuram, he described the pitiable state of a person who goes to hell, i.e., a person who regards his AchAryan as just another human being. In the subsequent 33rd and 34th pAsuram, he described the act of a person as “ignorant/foolish”, when a person disregards/ignores his AchAryan who is very near and goes in search of perumAL’s help that is far from reachable. In the 35th pAsuram, he explained how perumAL HIMSELF would burn a person if he gets away from his AchAryA’s relationships. In the 36th pAsuram, he explained that how a sishyAs should be. Specifically, he described how the 108 dhivya dEsa perumAL resides at the feet of one’s AchAryan and so why there is no need for a person to wander from place to place seeking perumAL. In the 37th pAsuram, another character of a good sishyAs was explained when a sishyAs regards his everything as his AchAryan. The “everything” that is being referenced above includes the likes of wealth, soul and body etc. Whatever a person may want, including wealth, long life, wealthy body, house, good qualities, and their good deeds, will be given to him by his AchAryan.

In this pAsuram, it is explained that sriman nArAyaNan grants anything to a person who chants HIS name called “nArAyaNA”. Likewise, a guru would grant anything and everything to his sishyA. Hence it can be seen that an AchAryan is none other than sriman nArAyaNan HIMSELF. So it behooves all of us to think about the lotus feet of our AchAryA. With this thought, svAmi aruLALa perumAL emberumAnAr finishes the crux of the entire work. 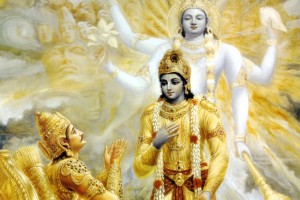 thenAr kamala thirumAmagaL kozhunan: Since pirAtti resides in the heart of sriman nArAyaNan, due to her constant touch, HIS heart became so beautiful. Moreover, because honey oozes incessantly from the lotus where she sits, HIS heart becomes even more beautiful. Hence bhagavAn is being described as the ONE who is the husband of the one who gives beauty to a lotus. She is also known by “thiru”, that is the equivalent of the Sanskrit word “sri”. In thiruppAvai, sri AndAl described HIM as “thiruvE thuyil yezhAi”. Since HE is the husband of such a “sri”, there is no one who is equal to HIM nor greater than HIM as could be seen in the following poem:

thAnE guruvAgi: sriman nArAyaNan has a reason for HIMSELF to conceal his identity and appear as an AchAryan in human form. The reason is explained in the subsequent section of the pAsuram.

than aruLAL: The reason is none other than HIS infinite compassion that arouses out of his causeless cause. So there is no need to investigate any more cause for HIS appearance as AchAryan. On whom does HE shower HIS compassion?

mAnidarkA: The aforementioned compassion is entirely directed towards all the human beings who are born in this world, who try to abide by the shAshthrAs and would want them to be liberated from eternal bondage.

inilathE thonrudhalAl: If a child falls into a well, its mother falls into the well as well to rescue it. Likewise, the  eternal mother and the one and the only mother for all of us, namel sriman nArAyaNan comes into this world where we have fell, to rescue us.

yArkum: HE resuces us not just a section of people. HE rescues us across all cast including brAhmanAs, shathriyAs, vaishyAs, sudrAs etc. HE rescues people at all stages of like including brAhmacharyam, gruhasthshAshramam, vAnaprastham and sanyAsam. HE rescues both male and the female alike. Essentially, HE rescues everyone.

avan thALiNayai uNNuvadhE: The pronoun “avan” here summarizes all the glories of sriman nArAyaNan. HE is the sole leader, sole refuge and the sole benefit for all jIvAthmAs. HIS divine lotus feet is the target, object of attainment for all jIvAthmAs and more importantly the means to attain them in the first place. It behooves all the jIvAthmAs to think about this glorious attribute of sriman nArAyaNan. The exclusiveness (EkAram) in the phrase “uNNuvadhE” means that there is no need of anything else apart from this.

sAla urum: This means very apt. “sAla” would mean very much and “urum” is appropriate. This phrase would mean that if a jIvAthmA thinks about sriman nArAyaNan as mentioned in the phrase “avan thALiNayai uNNuvadhE”, it is the perfect thing / most appropriate thing to do.

“sriman nArAyaNan, the husband of thirumAmagaL (periya pirAttiyAr), appears as AchAryan in human form, out of HIS extreme compassion, to uplift the downtrodden people in this world. HE is the sole leader, refuge and target for all jIvAthmAs one and the like. Such a perumAL’s lotus feet is not only the object of attainment for all souls, but deservedly so. In addition to it, the lotus feet is the only means of attaining it. A jIvAthmA should always think about these facts in the mind. This would be the most appropriate thing for a jIvAthmA to do. Not thinking about this and doing any other thing is useless. Hence, a guru (AchAryan) is a representative of sriman nArAyaNan who appeared for the sake of human beings. To think incessantly about such an AchAryan is the most appropriate thing for a soul to do. This is illustrated by the phrase “ezhuthu aRivithavan iRaivanAgum”, in olden thamizh literature.