bhagavAn pervades in each atom of the drops of water in the ocean, in the subtlest achith (matter) particles which exist from the earth to the sky and in the jIvAthmAs which exist inside each such particle. Even inside those jIvAthmAs, he pervades most casually/conveniently as if he is staying (all by himself) in a huge universe. Yet, he is invisible to others and he is the one who annihilates everything. nammAzhwAr instructs his mind to worship the lotus feet of such emperumAn who is clearly established in vEdham.

nammAzhwAr explains the convenience of bhagavAn‘s vyApthi (omni-presence that was explained previously) in this pAsuram.

Previously nammAzhwAr explained that bhagavAn has the material realm as his subordinate (like body for the soul), the one who is omni-present, the abode of everything, controller and the master. But when jIvAthmA is bound inside a body, he becomes limited within the limitation of that body – would paramAthmA also go through similar difficulties/limitations? No. He pervades without any limitations in the most convenient manner.

parandha – spread everywhere
thaN – Since its not mixed with other bhUthams, ocean is naturally cool (which is the natural quality of water)
paravai uL – inside the EkArNava (singular water mass which is the source of everything)
nIr thoRum – in each drop of water
parandha aNdam ithu ena – Like being in the huge aNdam (egg shaped universe)
parandhu uLan – being present without any limitation
nilam – in the earth
visumbu – in the higher planets
ozhivu aRa – in every particle
karandha – in the most subtle manner (invisible)
sil idam thoRum – Even in the most minute places
idam – in those places
thigazh – self-effulgent
poruL thoRum – in the jIvAthmAs
karandhu – hiding inside in such a way that even those pervaded objects do not know his existence
engum – everywhere
parandhu uLan – being the omni-present one
ivai uNda karan – one who consumed all these during samhAram and stayed firm

Just like staying conveniently (all by himself) in the huge universe, he stays in each drop of the water in the naturally cool ocean in the most subtle matter. He is present even inside the most minute places and inside the self-effulgent jIvAthmAs who reside in those minute places in such a manner that the pervaded objects do not realise his presence. He, being the omni-present being, consumed everything during samhAram (annihilation) and remained firm.

With this, it is established that bhagavAn is omni-present in both kAraNa dhasai (causal stage) and kArya dhasai (resulting stage) even in the most subtle chith and achith in the most convenient way without any limitation.

Included in the introduction itself. 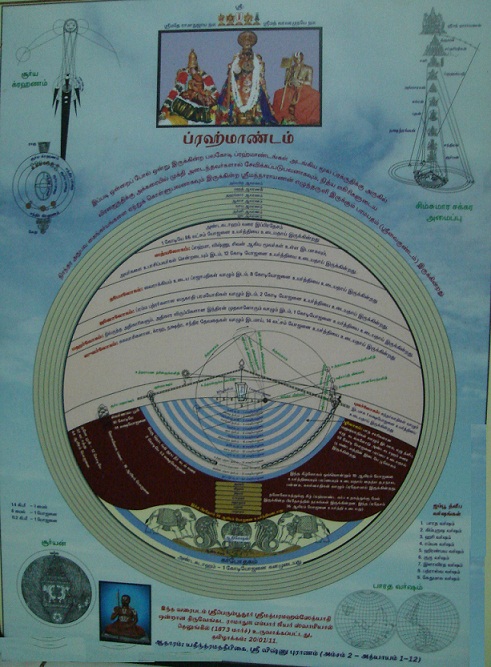 After rejecting kudhrushtis who accept vEdham but misinterpret them, this pAsuram rejects sUnyavAdhis (philosophers of voidness) who say “there is no pramANam (scriptures), there is no pramEyam (goal/bhagavAn); everything is sUnyam (void). Thus there is no vEdham, no bhagavAn (who is the object of vEdham) and no existence of this realm (which is his wealth)”.

Subsequently, nammAzhwAr refutes mAdhyamika baudhdha philosophers (a type of sUnyavAdhi – voidness philoshopher) who is considered as the primary amongst vEdha bhAhyas (the ones who reject vEdham).

Previously, nammAzhwAr refuted those who partially took some aspects of pramANam (scriptures) and pramEyam (goal) and thus misunderstood bhagavAn‘s svarUpam and his attributes/qualities. In this pAsuram, AzhwAr refutes sUnyavAdhi who rejects both pramANam and pramEyam. Even before the sUnyavAdhi starts giving any reason for his argument, AzhwAr himself declares the truth about bhagavAn who is with vibhUthi (great wealth of (spiritual realm and) material realm).

In this pAsuram, nammAzhwAr refutes sarva sUnyavAdhi (one who says everything is void in all aspects). He refutes as done by srI bhAshyakArar (emperumAnAr) in srI bhAsyhyam. Since bhAshyakArar is after the times of AzhwAr, we can conclude that bhAshyakArar writes his refutal in srI bhAshyam based on AzhwAr‘s explanations.

Previously kudhrushtis argued that brahmA, rudhra et al are supreme based on some pramANams. But AzhwAr establishes that srIman nArAyaNan is the supreme lord, the entire material realm is for his service just like body is for the AthmA and these are revealed in vEdham.

When we say “something does not exist”, we first need to define that something and then only reject the existence of that thing. Due to the fact that “something” is defined first, it cannot be made void. Merely saying something does not exist (without defining the entity) will not explain complete voidness. sarva sUnyavAdham (complete voidness) can never be established (If there is a proper word that will always indicate some entity. It can never point to non-existing entity. For example if we say “there is no rabbit” – that means rabbit generally exists but it does not exist here at this place. Even if we create composite words like “rabbit-horn” (which is contradictory since there is no horn for rabbit) and say that does not exist, it will only prove that there is no connection between rabbit and horn – but both rabbit and horn exist separately.Thus, sarva sUnyavAdham can never be established).

AzhwAr tells the sUnyavAdhi that you can neither prove voidness by accepting bhagavAn‘s existence nor by rejecting bhagavAn‘s existence. In either case, your desire (of establishing voidness) will not be fulfilled. I will take your word of “bhagavAn does not exist” and prove that bhagavAn exists. Generally, we explain the meaning of a word that indicates the presence or absence of an entity (i.e., when we say something exists, that means that entity exists in a particular place, time and form. Similarly when we say an entity does not exist, that means that entity does not exist in particular place, time and form). If we do not agree to this common platform of debate, you do not have the qualification to participate in the debate.

uLan enil – if said to be existing as per own philosophy (vaidhika philosophy)
uLan alan enil – if said to be non-existing as per other philosophy (avaidhika philosophy)
uLan – Should be considered as existing since there should be an entity (substratum) for sath bhAvam (existence) or asath bhAvam (non-existence) while making a statement; thus,
uLan ena ilan ena ivai – that which is said as existing or non-existing
guNamudaimaiyil – having as attribute
ivvuruvugaL ivvaruvugaL – those aspects with form or without form in this material realm
avanuruvam avanaruval – having them as prakAram (attribute) that shows or hides
iru thagaimaiyodu – having two different aspects
uLan – being
parandhu – pervading everywhere
ozhivilan – present without ever ceasing to exist

bhagavAn is the substratum for both existence (as per AzhwAr‘s vaidhika philosophy) or non-existence (as per avaidhika philosophy) – so, bhagavAn must be understood/accepted as existing  while making a statement about him. He is the one who pervades everywhere without ever ceasing to exist and has both with-form and form-less manifestation of this material realm as his two types of aspects which shows and hides him respectively.

AzhwAr tells a sUnyavAdhi “You cannot prove bhagavAn‘s non-existence through his presence or absence. In general, bhAvam (presence) or abhAvam (absence) of an entity/attribute is based on the place, time and form. When we say bhagavAn is present, that means he is present within gross forms which are visible  and when say bhagavAn is absent, that means he is present within subtle forms which are invisible. Even for other entities (chith and achith), the same rule applies – they either are present in gross or subtle forms. Thus being with form (gross) or without form (subtle) are just his attributes. Thus in either case he exists”. Thus sUnyavAdhi is refuted.

Note: kAnchI P.B aNNangarAchAryar swamy says at the end of his detailed explanation for this pAsuram in his dhivyArththa dhIpikai commentary – “It cannot be explained in any more detail – this should be heard in detail under learned scholars” – what to speak about this English translation? The translation here is to develop the taste in hearing word-by-word kAlakshEpam of these wonderful granthams which are the only way to get reasonable understanding of these pAsurams.