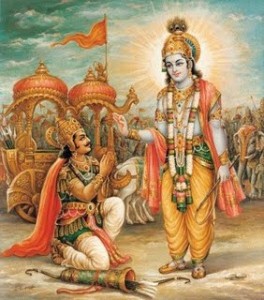 The important message in first line of dwayamahAmanthram is to surrender to bhagawAn’sholy feet. This is known as “sidhdhOpAyavaraNam”.

“siddhOpAyam” means the upAyam (perumAn) that is always in a ready state. Since bhagawAn is always ready (to accept our saraNAgathi), He is understood as “siddhOpAyam”.  When we do saraNAgathi saying “You are the means/upAyam” to such a sidhOpAyam (perumaL), we should not be attached to any other means/upAyam. Only after completely discarding anything else as upAyam, should we surrendertoperumAL’s feet. So it is required that one who surrenders to Him as upAyam should discard other things as upAyam. So discarding other upAyams(means) is considered as a part of doing saraNagathi. These are clearly specified in gIthacharamaslOkam.When one deeply understands charamaslOkam and surrenders to His lotus feet, he or she would not have interest in taking to other upAyam/means. They would act according to their sEshathvam (sub-servience to perumAL), and so would rest all their deeds on His shoulders and would be at peace with everything.It would bring extreme peace to the mind of such a person who thinks: “for all our well-being it is emperumAn who is responsible, we don’t have anything to do with it”. Swami aruLALaperumALemperumAnAr says that he is also one such person and in this pAsuramhe shares the state of mind of such a person, including himself.

thIrthammuyandruaaduvadhum         – (we were doing these before): Take big efforts to bathe in rivers like Ganga, cauvery, etc., to cleanse ourselves from sins,

pArthanaimunkaathapiraan               – (that is, before) lord Krishna protected Arjuna in kurukshEthra war by giving him and us, the bhagavadgItha.

thIrtha(m)muyandRAduvadhum:  People make efforts to go and take full-fledged dip in the holy waters of rivers such as Ganga, Yamuna, Saraswathi, Cauvery etc., in order to get cleansed of their sins.

seithavangaLseyvanavum:  People undergo a lot of strain in their body by doing tough penances. “oonvAdauNNAdhuporuppidaiyEnindrumpunalkuLithumaindhuneruppidaiyEnindrumvIzhkaniyumoozhilaiyumennumivaiyEnugarndhuudalamthAnvarundhi” are some of the phrases that azhvars use to describe the high level of strain that people undergo in some penances inorder to get rid of their sins. Since Swami aruLALaperumALemperumANAr has said “thavangal” in plural, it includes charity, yAgam and other activities that are deemed good as well (which are done as a means/upAyam).

pArththanaimunkAththapirAnpArppadhanmun: Lord Krishna did advise Arjuna about other ways of reaching HIM including karma yOgam, gyAnayOgam, bhakti yOgam and the like. After listening to them Arjuna realized that there is a significant effort that a person needs to put in forfollowing those other means of reaching Him, and that it is against the nature or eligibility of a sEshan (servant/subservient) to use other means to reach Him. Seeing Arjuna in such a confused and sad state, Lord Krishna replied “Arjuna! You do not have to do any upAyams such as karma yOgam, gyAnayOgam, or bhakti yOgam that I described earlier. Forget about all those completely without any trace. I am an ocean full of virtuous qualities, and at the same time I am easily accessible to those who believe Me and only Me. I would not punish My devotees for their sins. I shall gladly forget those. I am the Intellect and also valorous. Hence, please take refuge under Mewho hasall these divine qualities. While doing so, please think: “kaNNan would not expect anything from us; we do not Have to give anything to Him” and surrender to me by considering me as complete in all divine qualities. If you can do this, I, who is the source of qualities such as strength, power, valour as well as ease of accessibility, simplicity etc., will think about your ignorance, lack of strength, lack of power to get things accomplished, so on and so forth. I will also think about your helpless state upon which you have surrendered everything toMe. In this hapless situation of yours, I will never leave you and will always be by your side to protect you at all times. Inorder for you to surrender to me, there may be many sins that may obstruct the way to reach Me. I will make sure that all those sins are removed, and thus the path to surrender is very clear for you. So, you do Not worry.” Thus, by His words, Krishna removed the confusion and sorrow that engulfed Arjuna’s mind. Swami aruLALaperumALemperumAnAr says “pArppadhanmun” (before He saw us) to refer to the time before such a Supreme God Krishna sees and utters that statement (that he told Arjuna) to us (and to imply that it is before our hearts understood its meaning).

seerthuvaraimannan:    Azhwars say “padhinArAmAyiravardevimArpaNiseyyathuvaraiennumadhilnAyagarAgiveetRirundhamaNavALar”. Krishna was not only the King of Dwaraka, but also the King of wives who did not want anything apart from Krishna.

adiyOmennumvAzvhu: A jIvAthmA should realize that he is an eternal servant to his master. After realizing this, he should relinquish all those other ways of saving himself and be assured that perumAL is the only ONE who can save him after all. When a jIvAthmA get this knowledge, only then he would possess real wealth. When PerumAL had given a jIavAthma this sort of wealth, then there is no reason for jIvAthmato worry. A jIvAthmA is characterized by a lot of qualities like happiness personified, knowledge personified, sEshathvam(servant) personified etc. Out of all these, he should realize that being a servant to his Master is the most important and significant character (identifying factor) for which he should be proud of. When he realizes that he is an eternal servant to his Lord Krishna, then he does not take any step to protect himself, nor does he do anything for his own personal satisfaction. When these kinds of realizations happen for a jIvAthmA, only then he is said to be “living” (vAzhvu).

namakkueendhadharpin:   The character of being a servant to the Master is not something that is created new. All the 9 different relationships between jIvAthmA and paramAthmAare there forever. The phrase of the pAsuram refers to the time when a jIvAthmA acknowledges and accepts it (he had lost and forgotten about this relationship). It is understood that the reason for this knowledge to be born again is completely due to perumAL’s causeless grace. So, in essence, Perumal has chosen a time to bestow the knowledge that “a jIvAthma is always a servant to Him”.

ennakuraivENdumini:   When He Himself has granted such a knowledge, then why should one worry anymore about other means/upAyams? Since perumAL has said to Arjuna“maasuchaha”, we too don’t have to be worried about anything, and so do live in peace without any worries about having to do any efforts or taking any responsibilities (for reaching Him).