This pAsuram explains the point that one’s Acharyan is everything. The essence of all meanings conveyed in all vEdhAs and other scriptures is nothing but the path of total surrender (sharanAgathi). The meaning of such a path known as sharanAgathi was explained to a person by his Acharyan. Hence, one’s Acharayn’s lotus feet has to be deemed as everything by a person. This point is being described in this pAsuram. 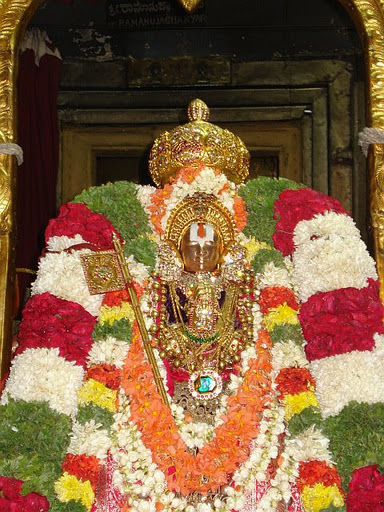 thandha – The one who showed it who is none other than

than iraivan – one’s AchAryan, who showed the path of sharanAgathi. He is one’s god. Such an AchAryan’s

araNAgum: is the refuge for a person.

ennum adhu: The sharanAgathi shAsthra that says so and

oru nAngu vEdham: the incomparable vEdhAs that include rig, yajur, sAma and atharvana

utpodhindha: the stuff that is impregnated with these vEdhAs

mei poruLum: The true and inner meaning of

aduvE: is nothing but to seek refuge under the lotus feet of one’s AchAryan.

vEdham oru nAngin utpodhindha mei poruLum: The word “oru” in this phrase describes the incomparable nature of vEdhAs, i.e., they are not being created by man. They are not written and they are without any doubts, ambiguity and confusing nature. They are the ones that describe something based on the face value. They do not contort anything to make it saleable etc.

The word “nAngu” in the above phrase means four and so represents the four vEdhAs namely rig, yajur, sAma and atharvana vEdA. In order to keep an object fast and secure, there is a practice to tie it with a rope that has 8 smaller threads in it. Likewise, the thirumanthiram that has eight syllables in it, keep the ultimate sriman nArAyaNan very fast and secure in it. This “ashtAksha mahA manthiram” is implicit in all the vEdhAs and is invisible (It is good to note the thiruchandha viruththam says “ettinOdum iraNdenum kayiRinAl ananthanai katti”). The word vEdhA (that which measures everything) is superior to all other scriptures and work that talk about this ultimate god sriman nArAyaNan that is being held as “secret”. Since it is quantified as “four” vEdhAs, it goes to prove that it is not something that is being mentioned in a remote corner of vEdhAs put together. It shows that the overall purport of all vEdhAs, that has branched into innumerable sub-divisions, is nothing but the meaning of the ashtAkshara manthram. Moreover, that treasured meaning is not just kept superficially for anyone to glean. It is treasured very much because it is the ultimate sriman nArAyaNan. The phrase “mei porul” would mean the “true stuff”. This goes ahead to say that the vEdhAs does not boast about the ultimate thing but would tell the true nature of the supreme sriman nArAyaNan.

kOdhil manu mudhal nUl kUruvadhum: ‘kOdhu” is fault and hence “kOdhil” would mean that which is there without any fault. The fault that is referred here is the fault that arises when a particular thing is being interpreted in a different manner compared to the original by concocting whims and fancies to the original. For example, if one were to see a sea shell, he should say that he saw a sea shell. However, if he says that he saw silver, just so to attract attention, then that statement is said to be a faulty statement. Manu shAsthram is one such shAshtram that is devoid of any faults like this. The adjective “kOdhil” was used for “manu shAsthram” would imply that whatever manu says is a medicine. Thus, the greatness of manu shAsthram could be inferred. So, one need not do any kind of research in manu shAsthram as to if we can take it literally and/or apply them for our lives. This adjective “kOdhil” when it is used to qualify other scriptures, the greatness of those scriptures being referenced can be known and eventually the credibility of those is bolstered. That is to say the these scriptures do not tell anything in a confusing manner nor in a concocted manner. Such scriptures include ithihAsas like “sAthvIka smrithis, srivishnu purANam, srimad bhAgavatham, mahAbhAratham and AgamAs like pAncharAthram etc. The aforementioned scriptures unanimously tell the meaning that is treasured in the “ashtAkshara mahA manthram” which forms the heart of the vEdhAs itself. The meaning that is treasured is nothing but the path of sharanAgathi and the duty of these scriptures like manu etc is to tell that meaning explicitly and clearly. The bottom line is that the path of total surrender (sharanAgathi) is what comes out of the crux of vEdhAs and other above mentioned scriptures like manu shAsthram etc.

thIdhil sharaNAgathi thandha:- “thIdhu” would mean fault and hence “thIdhil” is without any fault. The path of total surrender (sharanAgathi) is without any fault. In the same scriptures that showed us what sharanAgathi is, there are chapters that talks about the defects found in other paths apart from sharanAgathi, such as karma yOgam, gyAna yOgam, bhakthi yOgam etc. These other paths cannot be done by everybody. Only certain people are qualified to do it. Even those who are qualified to do cannot do all that which is prescribed in these other paths. If one does not do what is prescribed in these other paths, then it would lead them to nowhere. Since we have the easiest path called “sharanAgathi”, there is absolutely no need to follow other paths. One cannot find any fault with this sharanAgathi approach, where there is direct contact with sriman nArAyaNan. This is its highest merit as the word “prapathi” itself would mean “Iswaran”  (sriman nArAyaNan) as per bhagavad vishayam. This easiest path of sharanAgathi is being given to us by AcharyAn just like how a poor person is being given a copious amount of wealth to enjoy forever. Such a sharanAgathi path is being given to us by our AchAryan.

than iraivan: In the 30th pAsuram, one’s Acharyan was described as the one who gave the eight syllabled ashtAkshara mahA manthram (ettezhuthum thandhavanE). In this pAsuram, he is being described as the one who gave the sharanAgathi (sharanAgathi thandhavan). From this, we can understand that there is difference between giving away the meanings of ashtAkshara mahA manthram and the meanings of sharanAgathi. In this pAsuram, it is secretively described as “sharanAgathi” whereas in the earlier pAsuram, it was explicitly mentioned as “eight syllabled” manthram. There are three main manthram that includes thirumanthram, dvayam and charama slokam. In thirumanthram and charama shloka, the practice of our ancestors is to hide the meanings secretively and tell the manthram per se explicitly. In case of dwayam that talks about sharanAgathi, they would not only hide the meanings but also the manthram as well by not uttering it vocally. They would only utter it in their mind. By this, we can know that there is something of utmost value in that most secretive manthram known as dvaya mahA manthram. Speaking of this, swamy nanjIyar would remark that in dvayam, one can learn about perumAL’s beautiful and divine body, ITS divine qualities, the characteristics of paramAthma, HIS innumerable qualities, the ever happy state of nithyAthmas, mukthAthmas etc., However, for a person who follows the sharanAgathi path and want to reach the eternal abode of sriman nArAyaNan, the dvaya mahA manthram would manifest itself as a beautiful form and would be pleasing to the person. All these directly point the extreme greatness of sharanAgathi manthram which is inside dvayam. Such dvaya mahA manthram is what one’s AchAryan preaches to his student. Hence, one’s Acharyan, who preached the dvaya mahA manthram, is the highest god for a person. The prefix “than” before “iraivan” would mean that unlike perumal sriman nArAyaNan, who is the god for everyone, “AchAryan” is the god for us. He is the god to a particular individual or a few people. The point of exclusive god is hidden in this usage of “than”.

thALE: The lotus feet of such an AchAryan who is the god to a person. If we just look at the word “thALE”, we can understand that for those who caught hold of perumAL and for those who caught hold of his AchArya, their lotus feet is the refuge. There is an “EkAram” in the word “thALE” that means that the AchAryAn’s lotus feet does not need the help of anyone else. It would get the job done on its own.