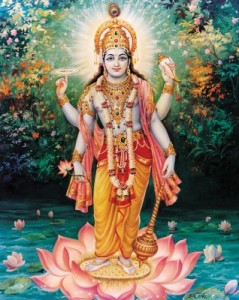 In the previous pAsuram, svAmi aruLALa perumAL emberumAnAr described how perumAL would not pay any heed to the mistakes done by HIS devotees. Even if someone points at the mistakes of a person, HE would never treat them as blemishes. Instead HE would treasure them as a thing of enjoyment. The reason behind this is because HE has a very important quality known as “vAthsalyam”. HE is known as “vathsalan” because of this quality. This is the quality by which HE treats the blemishes as blessings. HE would treat the past mistakes / blemishes of a person and would treasure them as something that is so enjoyable to HIM. So, even if someone were to argue against perumAL that there still remains some mistakes that HE need to take care of, since HE does not treat them as blemishes and instead treat them as “blessings”, there is absolutely no need for anyone to be afraid of their past karmas. This is what is illustrated in this pAsuram.

aRRam uraikkil adaindhavar pAl ambuyaikOn – If one were to tell certainly, to the ones who have taken refuge at the feet of perumAL who is the husband of the one who sits on the lotus flower,

kuRRam uNarndhu igazhum koLgaiyanO? – notices the mistakes of His devotees and would dislike them, would this be true?

eRRE than kanRin udambin vazhuvanRO? kAdhalippadhu – No! Just like the mother cow happily cleans out and licks the impurities from the body of its calf

anRadhanai InRugandha A – soon after delivering the calfaRRam uraikkil: This phrase would mean “if one were to tell with certainty”, i.e., if one were to ascertain something as final and concrete, here it is.

adaindhavar pAl: svAmi aruLALa perumAL emberumAnAr refers to devotees of srIman nArAyaNan towards whom the latter behaves in a particular manner that is being detailed in the ensuing phrases.

ambuyaikOn: perumAL srIman nArAyaNan is being referred by many adjectives like husband of thiru, elder brother of lakshmaNan etc.

The word “pAl” is a case ending in thamizh that means “towards”. Hence, in this context, the name “ambuyaikOn” would imply that the devotees go through via pirAtti and so perumAL would definitely accept them. Since perumAL had accepted HIS devotees because he had come to HIM via HIS consort namely pirAtti, HE would never pay any heed to the sins. This is because it is her inherent character. After accepting a person, pirAtti would want to test the resolve of perumAL as in if HE had accepted wholeheartedly or just for the sake of it. She would talk about all the sins of this persons so as to see if perumAL rejects the person because of sins. However, perumAL would not do that ever. He would reply to pirAtti, “en adiyAr adhu seyyAr” (MY devotee will commit those sins). Thus, it only strengthens the point that HE will accept a person wholeheartedly and would never leave him for he has come unto HIM through pirAtti. HE would even go one step further than pirAtti would tell her, “Even if it is true that MY devotee had committed sins as described by you, it will be for a bigger and a larger cause. Hence I would not treat them as sins in the first place because it has ended up as good later”. This is the conversation between perumAL and pirAtti as told by periyAzvAr thirumozhi pAsuram 4.10.2.

kuRRam uNarndhigazhum koLgaiyanO?:  svAmi aruLALa perumAL emberumAnAr ascertains something by means of asking a question. He asks if perumAL is that type of a person who would hate HIS devotee because the latter had committed innumerable sins? The reason this question was raised in the first place is to let the readers know that by asking it, there is an obvious negation as the answer that would reinforce the underlying point. “koLgai” is own’s nature which is nothing but accepting a devotee just because he has been recommended by HIS consort. HE would never know the sins of HIS devotees. Even if pirAtti counter argues to check HIS steadfastness, HE would treat those sins as an object of enjoyment. HE would never develop hatred towards that person in lieu of the sins. This is HIS inherent nature and hence HE is being known as “vasthsalan” because of this character that is known as “vAthsalyam”. “vAthsalyam” is treating blemishes as blessings. “vathsam” is a cow that is just born and the love its mother has on itself is known as “vAthsalyam”. perumAL is known as “vathsalan” because of HIM having this particular character that will be illustrated with an example in the next paragraph. Here, svAmi aruLALa perumAL emberumAnAr answers to the question as in where did he see this display of character in the real world.

eRRE than kanRin udambin vazhuvanRO? kAdhalippadhu anRadhanai InRugandha A: “eRRE” is an exclamation. One who does know about this quality called “vAthsalyam” will be the ones who would think that perumAL would have hatred towards those who commit sins. svAmi aruLALa perumAL emberumAnAr lets out an exclamation here to ask does people do exist like this in the first place who does know about HIS vAthsalyam? The quality of “vAthsalyam” is being illustrated now with an example. A cow would never eat impure grass, i.e. a grass that someone had stepped upon. However, when it delivers its baby, it licks and relished all the impurities in its baby’s body. As they say “InRa pozhudin peridhuvakkum”, the mother cow showers its complete love on its calf’s body that is just born. Likewise, perumAL would treat all those innumerable accrued sins over eons of a devotee as an object of enjoyment. HE would never hate him just like how a cow would never hate its calf. Whenever, our pUrvAcharyas illustrate the quality of “vAthsalyam”, they talk about this example. “vathsam” is calf and as seen earlier the love that its mother has is known as “vAthsalyam”. This quality can be seen only in perumAL forever and no one else. So, this quality is often times referred as “godly”. svAmi aruLALa perumAL emberumAnAr is awestruck by this particular quality of perumAL and that is why lets out an exclamation “eRRE”.