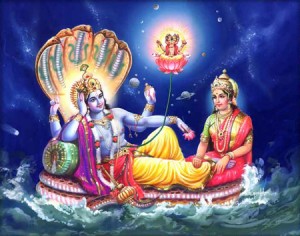 This pAsuram consoles all those who are afraid with the thought that their karmic actions would continue to follow them and haunt them forever. This pAsuram stresses the fact that after total surrender (saraNAgathi), there is no sufferings due to our karma in the past. This is the crux of this pAsuram.

Ezhai manamE! inith thaLarEl -– but, the heart without knowledge, do not fret
Azhi vaNNan thannadik kIzh vIzhndhu saraN enRu iranthorukAl – because you can fall at the feet of the one with the color of the ocean and tell HIM that HE alone is your savior.
sonnadhaR pin uNdO? Thuyar – After saying that HE is your savior, can you really worry about karmA or any associated suffering? No!

Uzhi vinaik kuRumbar:  Past karma is being given a form and shape here. It is being personified as a wicked person and called “kuRumbar”.

“Uzh” refers to old and so “Uzh vina” is old (past) karma. The reason past karmas is personified here is because of the level of bad influence it exerts on a person, like how they say “azhukARu ena oru pAvi”. They say “kayamai ennum paNbuchol” where the atrocities of material things is being personified into a living person. The atrocities are so high that it can be compared to a group of person. Likewise, there are a group of people (kayavar) who are very strong. Using their strength, they would make a whole country slave of themselves and rule them as per their whims and fancies. Similarly, this person called “kurubmbar” who are big group of past karmas take a person according to however they want. There is also one more evidence to this personification application in “kangul kuRumbar”. Here kangul (night) plays the role of kuRumbar. Yet another phrase would be “aivar” where the five sense is being personified.

Ottaruvar enRanjchi: kuRumbar would keep running behind one’s back to haunt them. The use of the word “Ottaruvar” is to signify that these past karmas come back faster than one would think.

Ezhai manamE!: Oh my foolish heart!!! svAmi aruLALa perumAL emberumAnAr says the heart is foolish because it does not know that a) perumAL is the ONE who never relinquishes those who had done total surrender to HIS lotus feet (HE shows through HIS hand that “let you don’t fear”) b) the greatness of the wonderful path of saraNAgathi that leads to the impeccable srivaikuntam c) the benefits to the person who had done saraNAgathi. Looking at this foolish and pitiable heart, some consolation is being offered in the subsequent lines of this pAsuram.

inith thaLarEl: Even one has a lot of jitters before doing saraNAgathi, there is absolutely no need of any such jitters or fear after saraNAgathi. Since the greatness of sharanaAgathi is such that, svAmi aruLALa perumAL emberumAnAr consols his heart.  This is similar to how krishna consoled arjuna by saying “do not fear. I am there for you”. The word “ini” that means here afterwards refers to the time after saraNAgathi was performed.

saraN enRu iranthu orukAl sonnadhaR pin: After saraNAgathi is performed by saying, “YOU should be the sole refuge”, there is no fear. This statement should be said only once. There is absolutely no need to do saraNAgathi more than once. It defeats its very purpose and theme. Hence it behooves oneself to be cognizant of the fact that saraNAgathi needs to be performed once and exactly once wherein the person request perumAL that let HIS lotus feet be the sole refuge for him.