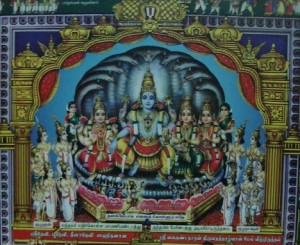 One should undergo the effects of karma, be it good or bad. No one can escape it. nIdhi nUl said, “uraRpAla nIkkal uRuvarkum AgA”. This means that devAs as well cannot stop bad karmas. Similarly, the good karma also cannot be stopped. If there is no rain, no one can give rain. Similarly, if it rains excessively, no one can stop the rain from pouring. Hence one can understand the karmic effects of a person, be it good or bad, has to be suffered / enjoyed by the person. This is an universal rule that sriman nArAyaNan had established us always. Actions done in previous births may reap risks and rewards in the current birth. Actions done in this birth may reap risk and reward in future births. This keeps on going like a swirl. Is there a liberaton for this jIvAthma who is constantly caught up in this swirl of karmic actions? This particular pAsuram answers this question. If there is no karma anymore , can there be subsequent births and will there be a need to go through any risk and reward of any karma anymore? No. All these aforementioned karma will be destroyed like a cotton ball being destroyed by a fire, says thamizh vEdham. There will not be subsequent births.

than thALil adaindhavarkkum uNdO? – about sriman nArAyaNa being the owner and fall at HIS lotus feet as their sole refuge would not have any concerns at all about the risks and rewards of karmA
piRandhu padu nIL thuyaram pin – as their karmA will be destroyed in this birth, like a cotton ball in fire

thidamAga aRindhu:  This phrase would mean “to know it very clearly / concretely”. If we dwell upon sAsthras, we can see for ourselves that the ability of being a property is reserved for all the souls and the ability of being an owner is reserved only for sriman nArayaNan. Hence in this pAsuram, the name “udamai” is the name give to the soul and “udaiyAn” is the name given to sriman nArayaNan, as per the sAsthram. So, the owner will come to the place where HIS property is and would subsequently take it unto HIMSELF. HE is the one who comes and reaches the soul, serves as the means to reach HIM, and upon reaching, HE is the ONE who gets enjoyment out of the fact that HE has got his property. This relationship, i.e, “owner-owned” has to be understood by us very clearly in our mind (thidamAga) without scope for an iota of confusion in it.

avan than thALil adaindhavarkkum: This phrase includes all those who realize that they are the owned and fall at the lotus feet of their owner, sriman nArayaNan, via HIS consort “pirAtti”. In other words, they are the people who does saraNAgathi as per how it is described in the first half of “dwaya” manthram.

uNdO? piRandhu padu nIL thuyaram pin:  “nIL thuyaram” includes all those karmas that have been following us for eons together. The karmas are the reasons for future births. However, if one does saraNAgathi, will there be any more births? There will not be any births because there will not be any karmas in the first place. They will be destroyed completely.

This would mean that these karmas would just get lost in such a fashion that one would not even recognize where did they go all of a sudden. Hence, if a person had done saraNAgathi, will there be any subsequent birth filled with the need to undergo the effects of our karmic actions? Those who want to be liberated at once after doing saraNAgathi, will be liberated at once. However, there are a lot of people who wants to liberated at the end of their life in which they did saraNAgathi. Their wish will also be true. Hence it goes to prove that there is no birth anyways after sharanaAgathi. This is not a possibility. This is an absolute certainty, says svAmi “aruLALa perumAL emberumAnAr.”