In this pAsuram, they say ‘For the elders to allow us to be with you, we used ‘nOnbu’ as the front – nOnbu is not our agenda; it is only kainkaryam to your divine feet’; saying so, with the absence of any efforts by them (Akinchanyam) for gaining any right to mOksham, and with their wish to surrender to perumAn, they say ‘only you are the means’, and say ‘please forgive us for our prior mistakes’, and finally with their prayer for getting Him, they complete this pAsuram. It is only in the next pAsuram they pray Him for getting mOksham, but here they mention it to as part of talking about the absence of any means in them.

“Before I give you all the things you have asked till now and anything more you are going to ask (their real requirement), can you gOpikAs tell me what you have done to gain any qualification for getting something from me?”. He is trying to play with them.

If there are any other means that we followed, you would leave us to that and let us continue on that path. We don’t have any such means.

(ALavandhAr asks ’emperumAn! sisupAlan got mOksham because he said your names many times, kAkAsuran got respite as he fell on your feet, etc.. – they did some upAyam (means) and still you gave them mOksham, whereas I have not done anything, so why can’t you give me mOksham?’).

karRavaigaL – cows, which don’t have any knowledge.

We go behind cows. Our living is with the cows and going behind those cows. 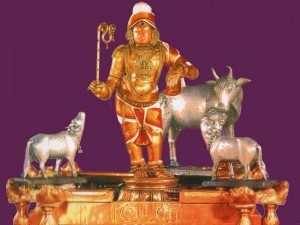 { krishNan too loves to go behind cows. Cows and calves look at His divine and mischievous face and grow happily. In the accompanying picture see krishNan standing like this as srIvidhyA rAjagOpAlan in the abhimAna sthalama of mannArgudi, and see how the calves are looking at him!}.

To gain gyAnam one has to go live with a guru. We follow the cows. In narasimha purANam 16-13 it says ‘gyAnEna hIna: pasubhi: samAna:‘ (one who doesn’t have gyAnam is equivalent to a cow). Such is our gyAnam learned from these cows.

Do we look like we have got some qualifications? Are the cows equivalent to sage vasishtar? Even the cows imitate and laugh at our cowherd behavior.

We go to forest; unlike people with gyAnam who with their ability live in villages, towns, and cities who would be able to gain some knowledge, we live in this small place and go behind cows to forest for getting them fed; this forest is not where many saints lived like in sALagrAmam etc., – this is one with just grass for the cows (so we don’t have that benefit too).

sErndhu – Our legs won’t stay in the village; they would go and be in the forest. (so we don’t have any qualification related to knowledge).

“for vysyas, taking care of cows is the varNAsrama dharmam, so you are all doing that? Isn’t that a qualification?”

“No we didn’t go to the forest with any vairAkyam (to follow the dharmam) – we don’t go there to do thapas like rishIs; we go there and we take care of ourselves–we eat. (Can you count this as karma yOgam?)”

“You may not have any such gyAnam now, but in your previous lives you might have gained gyAnam at the level of vidhurar or others”

‘onRum’ – (not even one/none of it) – no we don’t have any qualification in any life whatsoever. We don’t have any Athma gyAnam that leads to bhagavath gyAnam, nor do we have bhakthi which comes after gaining such gyAnam.

Isn’t the gOpikAs’ eagerness to mix with krishNan a form of bhakthi?  It is their nature to be desparate to be with Him – they don’t consider it as a means for getting him.

=> So, with these, they say they don’t have any karma, gyAna, bhakthi yOgam which can be used as a means for reaching him in srI vaikuntam.

nammAzhwAr said the same thing in the same order, “nORRa nOnbu ilEn, nuN aRivu ilEn‘ (I don’t have any karmas(actions) that is karma yogam, or any gyAnam (and so nor any bhakthi which is the next stage after gyAnam).

“You are also talking like those AzhwArs, so you do have such gyAnam”

The cowherd community that you can be sure of that we won’t have any gyAnam;

“Even after seeing us you are saying that we have brains – this is your lack of gyAnam”.

“You don’t have any qualifications, but you still want mOksham?”

krishNan continues, “Those who don’t have any puNNiyam (good karmA), cannot wish for mOksham”

“How can that be? We have got You. We feed food for the puNyam (you). That is, we don’t say No to your accepting us as your adiyAr; so you feel fulfilled. You are the means”.

piRavi peRum thanai – people go to perumAn and pray to him. Are we like that? You were born among us, and mingled with us – that is what we have got.

krishNan catches them: “You said you don’t have any gyAnam (so no puNyam (good karmA), but now you are saying you have got puNyam. You are contradicting yourselves.”

“You don’t have any of the yOgams; only a lot of disqualifying aspects, so why should I give you mOksham?”

We will have to lose our prize due to our lacking everything, only if You lack anything.

We don’t have to lose you because of not having anything else. (no other means, only you are our means to reach you). Thus this shows their upAya-nairapEkshyam.

“Since you are saying that I am everything, then I can give you mOksham if I want to, or I can deny if I don’t want to”.

“Did we come to paramapadham to ask you all these? You could not stay there without us, so it is you who were born here to be with us, to be teased by us, and to do all the chores we tell you to do – we are asking you only in such a place (here)”.

This name of gOvindhA shows perumAn‘s saulabhyam (being able to mix with small level people (all of us)), which is one of the main guNams of perumAn that one considers when doing saraNAgathi.

[ ANdAL used the name ‘nArAyaNA’ three times in prior pAsurams. In these three pAsurams (previous one, this, and the next) she calls him ‘gOvindhA’. When she said nArAyaNA, perumAn did not seem to be happy – she realized that He is born here in order to enjoy us and not be reminded of his greatness – so to make him happy she called him as gOvindhA three times, but the meaning is same – perumAn with saulabhyam for us to do saraNAgathi, and perumAn with swAmithvam for us to do kainkaryam].

“Aren’t you our relative? Don’t you have to take care of what we need?”

“Because of our relationship? That will end with a pot of water (last rites)”.

“How can you say for sure?”

“But they are your parents, (they would only talk like that)”

“Also see in what you (in the form of our AchAryAn) gave in our hands as the first pramANam – the source of all references (thirumanthram) – see its first word (praNavam)”.

That is why we said ‘nArAyaNanE namakkE paRai tharuvAn‘. You are the savior, we are the ones to be saved – that is our relationship, forever”.

“You are talking about our relationship, with you as gOpikAs, and me as your gOvindhan; but you called me as ‘narAyaNan’ instead.

“Is it wrong to call you, who is (in) everything, as nArAyaNan?”

“My purpose of coming here was to be with you all; so I like it when you call me gOvindhan”

If a prince and a common man were in a prison, and after getting released if the common man reminds of those days to the prince it would hurt the prince’s feelings. perumAn was also having the same emotion.

“we did that because of agyAnam due to being ignorant and small”. Sorry that we pushed you about our relationship with you and reminded you of your parathvam.

“We called you nArAyaNA because of our agyAnam due to our love. So please bear with us.

It is like when we are (wife is) in the same bed, you please do not complain that ‘the legs hit me, arms hit me’ “.

arjunan pleaded to krishNan to forgive him (during bhagavath gIta) for having called him ‘hey krishNa!’, ‘hey yAdhavA’, ‘hey friend’ without realizing krishNan’s greatness.

When you have come to this world to enjoy earning your saulabhyam, we called you with the name of nArAyaNan instead of gOvindhan by mistake due to agyAnam, small age, and love. Please do not be upset with us.

Would anyone say that their legs and arms did mistakes and be angry with those things? Since we are your property, if you don’t bless us then would it not be a loss for you?

Since you have not learned from a teacher sitting under his seat, (as a sarvagyan (who knows everything)), you do not know that it is not correct for you to be angry with us?

Your saulabhyam does not match with you anger.

krishNan tries to back out saying that you have to go through thAyAr when doing saraNAgathi.

They say that they have done all of that, and they are here only with thAyAr‘s (nappinnai’s) blessings and recommendation.

So it is now You who have to act.

This pAsuram talks about doing saraNAgathy – 1) accepting that we are not capable of doing karma/ gyAna/ bhakthi yOgams,  2) understanding that we don’t have any qualifications, and don’t want any qualifications to be the means, 3) praising perumAn who is complete in everything, 4) understanding our relationship with him, 5) accepting and feeling bad for our mistakes of thinking that there are other means other than Him for reaching Him, and 6) surrendering to Him through our AchAryAn;  This thought is saraNAgathy.