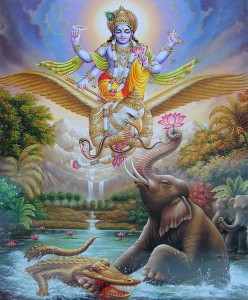 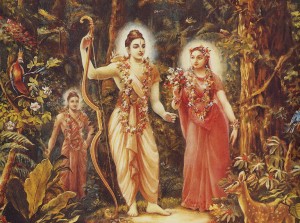 “So, have you got all the items you wanted for nOnbu?”

They reply, “krishNa! what we asked till now are for nOnbu, but there are a few personal ones that we need to ask you.”

After getting him they are talking about the rewards they would get for completing the nOnbu (getting him). During union with emperumAn it would appear that the ornaments are their aim.

vellum sIr – having the guNam of winning
kUdArai – those who are opposed,
gOvindhA – Oh gOvindha!
pAdi – (we would) sing (till we are content)
un thannai – about you,
paRai koNdu – and receive paRai (instrument)
yAm peru sammAnam – and the price we are going to get is
nAdu pugazhum parisinAl – that the villagers would appreciate/celebrate us,
yAm nanRAga aNivOm – we would wear (the ornaments) very well (as we are decorated with them by you and nappinnai pirAtti), (ornaments such as)
chUdagam – ornament for the arms
thOL vaLai – ornament for the shoulders
thOdu – ornament for the ears
sevip pU – ornament for the upper part of ears
pAdagam – (pAdha kadagam) – ornament for the legs
enRu anaiya pal kalanum – and more such ornaments;
adhan pinnE – after that,
pAl sORu – rice (in the) food made with milk
mUda – (which) would not be visible (due to)
nei peidhu – (lots of) ghee added,
muzhangai vazhi vAra – such that it would drip through the elbows,
kUdi irundhu – (we would) be together (and eat that)
kuLirndhu – and be happy.

krishNan wins those who don’t want to befriend Him; He will try as much as possible to include everyone with Him. He would win the ones like rAvaNan who did not want to bow his head till the end.

He loses to those who join/accept him.

“We won’t fall on the feet of krishNan who is having friendship with arjunan” said dhuryOdhanan, and you won him.

“We will do whatever you say” said pANdavas, and you did everything they said – walking for them – to ask for a few small villages, riding a chariot in the war, bathing the horses of the chariot, and so on.

AchAryas try hard to correct those who do not follow the sampradhAyam. They try whatever is required to help sishyas understand bhagavath vishayams.

So, kUraththAzhvAn took that person to an isolated place and started doing kAlakshEpam, one on one. That person would hold the grantham in his hands and read a phrase and kUraththAzhvAn would explain its meanings (as was the custom of the time). This went on for a few days. One day when this was going on, kUraththAzhvAn saw some people walking toward their location. That elderly man did not notice those people. kUraththAzhvAn was concerned that this person’s condition of anonymity would be in jeopardy if they came to know about this kAlakshEpam.

kUraththAzhvAn is gyAna nidhi – seeing his gyAnam emperumAnAr himself has wondered whether AlavandhAr has born in the form of this kUraththAzhvAn; there is no end to talking about the greatness of kUraththAzhvAn — that kUraththAzhvAn is sitting here pretending to learn from this person; he did not care what others would think of him. That old person realized his mistake and fell on kUraththAzhvAn’s feet.

They try whatever is required to help sishyas understand vishayams.

perumAL won enemies just by the supreme way he held his bow. (chachAla chApancha mumOcha vIra:) He won them by his guNam of valor.

He wins gOpikAs and adiyArs by showing his beauty and kindness (guNams).

He wins people like us who don’t show interest in any of his qualities, by using our sambandham with Azhwars as the front.

==> One could take care of the target of his arrows by applying some medicine; there is no medicine for the target of his beauty and kindness. “Wow! How can you be like that?” say the gyAnis when looking at his simplicity (eththiRam! – thiruvAimozhi 3-1-1 / எத்திறம்! (திருவாய்மொழி 3-1-1)).

You are so fond of the cows and you go behind them even though they don’t say they want to be with you, nor do they realize that you are going behind them.

You are just happy that they did not say No to your relationship; they enjoy and grow by your fond touch.
[ Another meaning for govindA – capable of speaking about great things. Our AchAryan ]

You are ‘gOpi jana vallabhan‘; singing your names is our benefit of doing the nOnbu; benefit of having a tongue.

They are talking about paRai (drum instrument) which is prApakam (means for nOnbu) when they are already on to prApyam (krishNan); they are doing this is to help the elders.

the prize we get – is the flower garland from your shoulders, for you to place it in our shoulders… like perumaL gave to pirAtti when going out of his palace to meet chakravarthy during the day of his pattAbhishEkam.

yAm – we, who think that we are always under the blessing of perumAn, and all that we have to do is accept that uninterrupted blessing.

you give… such that it is celebrated by everyone as “this one gave and all the girls got the prize!”.

[ The award we get is what we learned from AchAryan’s gatAksham, our association with our AchAryan. ‘thiruvadi sambandham’. ‘adiyen rAmAnuja dhAsan’]

(give us prize in the best way) like how perumAL and pirAtti together gave thiruvadi (hanumAn) the chain given by indhiran. Unlike those going to srIvaikuNtam from here who are decorated by apsara women, we want you and nappinnai pirAtti to decorate us; we don’t want to be in the situation of decorating and waiting for your arrival; we want you to decorate us and enjoy the beauty.

Jewels worn in hands – the hands of gOpikAs that krishNan would first hold when touching; he would fondly keep their hands in his head and chest;

with that touch he would want to hug our shoulders – we need jewels for such shoulders.

[ Jewels for our shoulders – thiru ilachchinai – the changu chakra poRi by our AchAryan. ]

even if we have already worn in our ear lobes, it wouldn’t be same as what you would put on us.

[==> The rahasyam we get in our ears from our AchAryan – thirumanthram.

unlike other jewels worn by them which bother when He hugs them, these ornaments and flowers worn in the upper part of their ear lobes would help him enjoy his hug.

Worn in their legs; after hugging and losing to them, he would press their legs – ornament for those legs;

chUdagam for hands, pAdagam for legs – pressing their hands and legs is what He does and accomplishes other related things from them.

[==> perumAn‘s thiruvadi is what we surrender to – he gave charama slOkam for that. That is our ornament.

==> So, the above three are about rahasya thrayam. They are also about ‘gyAna, bhakthi, vairAgyam’ that one would show towards perumAn. How? Since thirumanthram is about the gyAnam of our relationship with Him, dhvayam’s 2nd line of kainkaryam is based on our bhakthi towards him, and charama slOkam is based on vairAkyam to not use other means to reach Him, they are about gyAna, bhakthi, vairAgyam.

We will wear all types of ornaments that you know; you should know, you wear so many ornaments; we will wear many of these and more like these.

They had said ‘malar ittu nAm mudiyOm (2) (won’t wear flowers (as they were doing nOnbu)), but now they are saying they will wear all these jewels.  Only till coming to him were they to follow those things; now they want him to decorate them; he will do it if they say they agree to wear it.

As acharyan does pancha samskAram, we will wear those as our ornaments.]]

Will wear clothes.. were they not wearing before?

They did not wear the ones which He wore first – so they don’t consider them as clothes or as wearing.

His thiruppariyattam (cloth) worn in his head is what they want for their waist. In privacy they would wear each other’s clothes; that is the kind of clothing they wish for. As they are finishing nOnbu, they want a good thiruppariyattam.

His smell in what he wore first is what they enjoy when wearing it themselves.

gOvindhA, unRannaip pAdi, Adai uduppOm : Even when you were not near her she said gOvindhA raising her hands and she got unlimited length of saree; we are near you here, will there be any dearth of getting our clothes?

==> sEshathva gyAnam; one who does not have any gyAnam/awareness (like a baby, or a mentally challenged) would not worry about clothes; so gyAnam is equated to having clothes worn. We get gyAnam from AchAryan.

adhan pinnE – After wearing clothes worn by you, we want to eat prasAdham eaten by you.

We said ‘nei uNNOm pAl uNNOm‘, we did not eat ghee or milk all these days- seeing that, krishNa! you also avoided those things; so there is so much of milk and ghee in all of our houses. We will cook rice with milk, and will add a lot of ghee that covered its top; one would have to search for rice in between ghee.

thiruvAippAdi that is having bhagavath sambandham with krishNan is wealthy and loving.

==> pAl sOru: kainkaryam;   mUda – but we will not think that it is we who did the kainkaryam;   nei peidhu – thus we will stick to our pArathanthriyam.

For nOnbu they had said ‘nei uNNOm, pAl uNNOm (2)’, but now, after joining krishNan, they love to eat like this; enjoying food made of so much ghee and other tasty items, which krishNan ate first.

They were separated from krishNan all these days; now they are with him, around him, and they start feeling better after touching him, talking to him, and talking about him. This is better than eating. Eating is not their goal – being together with krishNan and touching the adiyArs is their wish.

aham annam – aham annAdha:  :  I am like food for paramAthmA. I the food of perumAn, am enjoying perumAn who enjoys me as a food;

Here too they are bhOgyam to each other.

Be with krishNan, and cool down the hearts that were aching all these days due to separation.

[==> Like how they conduct ‘namperumAL thirunAL’ to get all the srIvaishNavas together and enjoy that sight.

Together with other adiyArs, we enjoy the wonderful prasAdham we cooked.

That will be our sammAnam (gift).

Previous pAsuram ‘mAlE maNi vaNNa‘ highlighted “sAmyApaththi mOksham” – gaining equivalent kalyANa guNams as perumAn. There, ANdAL asked many of the things that perumAn holds – his changu, flag, mukthAthmAs (pallANdu isaippAr), etc., gaining what he has got.

With sEshathvam (servitude) we do kainkaryams to you for the sake of Your happiness, and without any thoughts that it is we who did all the kainkaryams – everything is yours, so whatever we give you is not created by us.

Doing kainkaryam is our nature; loving and blessing us is your nature.

It also highlights chakkarai pongal made with/of lots of ghee, milk, and some rice. When we take it in our hand to eat it (or not), the ghee will flow in our muzhankai (arm; all the way down to our elbow). We are happy to share the food with other adiyArs – other adiyArs are happy to enjoy it together with us.