This pAsuram is listing the benefits to the people who allowed the gOpikas to meet krishNan (for doing nOnbu). Even if one devotee is present in a place the whole place would live well; all the side benefits would happen by themselves; with so many (5 lakhs) gOpikAs being allowed to meet krishNan, there is no limit to how much good will happen to this world. 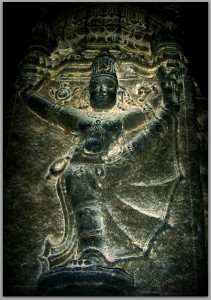 nAngaL pAdi -(if) we sing, (we who cannot live without singing His names)
pEr – the names
uththaman – of purushOthaman
Ongi – the one who grew tall
aLandha – and measured (with His lotus feet)
ulagu – all the three worlds,
nIradinAl – if we bathed
nam pAvaikku chARRi – with the front/pretense of a nOnbu
nAdu ellAm – the whole country
thIngu inRi – without any bad
mummAri peidhu – would properly rain
thingaL – every month, and
kayal ugaLa – fish would jump around
(so) Ongu perum sennel Udu – between the tall and healthy grass,
poRi vaNdu –  and beautiful bees
kaN paduppa – would sleep
pUm-kuvaLai pOdhil – in beautiful flowers,
thEngadhE – without hesitation
pukku irundhu – get to and try to
vAnga – pull
sIrtha mulai paRRi – by holding with both the hands the big nipples of
perum pasukkaL – healthily grown cows
kudam niRaikkum – they would fill the containers
vaLLal – with generosity
nIngAdha selvam – (such is the ) wealth that can be sustained
niRaindhu – and stay complete.

Note: Inner meaning about AchAryan/sishyan is interspersed in this text.

In previous pAsurams, they started with saying nArAyaNan (parathvam), then they said about his next place for avathAra ideas to save us people, as kshIrabhdi nAthan in the milky ocean and how gOpikAs were fond of his divine feet (vyUham); and now they are looking at the lotus feet of thrivikraman (vibhavam).

Ongi – as He was in sayanam (lying down posture) in the milky ocean, on Adhi sEshan, thinking about His next avathAram for saving people, when dhEvas prayed to Him about mahAbali’s troubles, He got up and grew as thrivikraman; ‘uvandha uLLaththanAi ulagam aLandhu [amalanAdhipirAn – 3]’ because of happiness to do the work for other people’s benefit;  It is not ‘vaLarndhu ulagaLandhu‘ but ‘Ongi ulagaLandhu‘ – it is not like He has to grow now – Ongi implies He with affection and kindness is getting up so fast, to help the dhEvas;

When a samsAri, one with ahankAram, svAthanthriyam, etc., one day wonders who will be the savior for him,  perumAn takes that as a call for help and immediately rushes to his or her heart to help further to reach near His lotus feet for doing kainkaryam.

When He measured all the worlds (with His 3 steps’ land), His divine foot touched all the people’s heads as He was fond of giving blessings to one and all. Even when some of them were not understanding His love for them, He was still fond of touching everyone like how a mother would hug her child sleeping next to her without thinking whether the child will be aware of her hug or not.

Since He is similar in beauty and behavior to krishNan, they are enjoying thrivikrama avathAram also.

He lives thinking that helping these dhEvas is His pleasure/destiny; An adhaman is one who troubles others to gain some benefits; madhyaman thinks others should live as well as he should live; but uththaman would even reduce himself for the benefit of others. Such a great perumAn reduced Himself (not only in size, as vAmanan), in order to help the dhEvas. 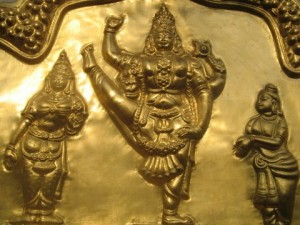 We do nAma sankIrthanam of such an uththaman. (saying his names (nAmam)).

uthaman pEr – refers to thirumanthram; in 1st pAsuram it says ‘nArAyaNan’, in the 2nd, ‘paraman’ that is His guNA as implied by the manthram, In this pAsuram, they refer to thrivikraman which refers to omnipresence (vyApthi) which the thirumanthram reveals, and is represented by vAmana.

krishNan in gIthA talked about 4 ways to reach him in srI vaikuntam – karma yOgam (actions), gyAna yOgam (wisdom/knowledge), bhakthi yOgam (devotion) and SaraNAgathi (surrender). The first three require so much effort on the person’s part, that krishNan suggested the last option that is SaraNAgathi (surrender; samAsrayaNam) for people like us.

Ongiyavan pEr pAdi – is telling the great people following the karma yOgam to recite the names (pEr pAdi) of the perumAL who got up and grew fast (action).

ulagaLandhavan pEr pAdi – when ones learns more about how He covered so many worlds with His divine foot, the gyAnam will grow – reciting His names in this way is for those great people following the gyAna yOgam

uththaman pEr pAdi – when thinking how He is an uththaman, the person would get more bhakthi – this is for the great people following the bhakthi yOgam to recite His names (pEr pAdi)

so, what about the SaranAgathAs (prapannars, mumukshus) who have done samAshrayaNam through her/his AchAryan? Which words combine in the pAsuram for them to talk about reciting his names? . . . . It is just ‘pEr pAdi‘! – saying His nAmams is swayam purushArtham (that itself is the goal), because, for the goal of reaching Him we have already surrendered to His lotus feet with the help of AchAryan (and rAmanujar).

‘We’ who won’t be able to bear it if we don’t say your nAmam;

they are happy about them being able to talk about and also meet krishNan as till yesterday the elders were policing even their hearts;

pAvaikku – The nOnbu that we are doing while at present when we are not able to be with the prApyam (krishNan);

pEr pAdi – nIrAdinAl – if we mingle with krishNan with the knowledge of our (ever-present) relationship with Him (sambandha gyAna pUrvakam).

(if we take bath – merge with krishNan) this place would get rid of all its problems, all will live well with their people (as a side-benefit (where not the focus is), of doing kainkaryam (where the focus is)); like how in rAma rAjyam people lived well not because of their puNyas (good karma), but with the bhAgyam of perumAL (rAman),

ellAm: not only this place, but all the places associated to this place also would live well.

thIngu inRi: feeling of svAthanthriyam (feeling independent of perumAn), giving too much importance to body and material comforts, etc., will all be averted with His blessings.

Without drought or flood – three cycles in a month – of nine-days’ sunlight and 1-day’s rain which would benefit the place;

we who are having the three characteristics of 1) ananyArha sEshathvam, 2) ananya sharaNathvam, and 3) ananyabhOgyathvam; whereas it might suffice to have goodness with just one such person, here we are so many of us with these characteristics making all of us very happy.

(because of good rains) the paddy crops would also quickly grow like the ulagaLandha perumAL;

Udu kayal ugaLa – The fish having grown big like baby elephants would not be able jump around easily as they are restricted in between the well-grown paddy; like how the devotees who see the sarvEshwaran (god of all) the ulagaLandha perumAL, would be awe-struck by His beauty and won’t move.

Like how mArIchA out of fear saw rAmA in every tree after he was thrown far away by rAmA, here the gOpikAs see vAmana when they see tall grass.

With the lillies growing beautifully, the bees would happily drink the honey and lie down on the bed in the flowers and sleep elatedly; as the big fish try to go in-between the grass, the flowers would nicely shake along providing a comfortable bed for the bees; as they got into the ‘pori‘ (trap) of the flowers during their sleep as the sun comes up, the male and female bees will complain to each other saying ‘you did not wake me up’, ‘no you did not wake me up’;

perumAn loves to stay and relax in the hearts of his sEshans.

sishyan feels safe under AchAryan’s blessings after having done samAshryaNam.

irundhu –  milk is always available with the cows

thEngAdhE – without any hesitation a sishyan would

The cows are so healthy in AyppAdi that it is not possible for the people to milk the cows just with their fingers – they have to use both their hands.

Those cows are so healthy, they would give so much milk just with touching and removing of the hands.

Just by touching, the cows would fill the containers so fast, that one has to keep changing those containers to catch all the milk; if they don’t change them fast it won’t be the fault of the cows – perumAn is also pouring his love, it is for the people to catch it as quickly and eagerly as they can.

– because of the above (giving milk)

– these cows are like krishNan; how the gOpikAs would tie a letter around His neck and ask Him to go as messenger, the cows also are standing amicable for the boys to tie it, direct it, etc.

They are the great cows – they live not based on just the grass and water, but based on kind and friendly touch of krishNan. They have listened to so much of krishNan’s flute while casually chewing and digesting their food; this is how Sathrunjayan the elephant of chakravarthi thirumagan (rAman) also grew up.

(if we did the nOnbu), this place will get all the wealth, unlimited wealth, the wealth that will always stay with the people; because it accumulated with the blessings of ANdAL. (selvam: kainkarya selvam).

Unlike the limits placed by sarvEswaran on our good and bad based on our puNya and pApA, here we would get ever-lasting goodness through these gOpikAs, similar to sItha pirAttiyAr saying ‘pApAnAm vA subhAnAm vA‘ (will be kind whether person has done good or bad).

May we get the ever-lasting wealth that is AchAryan’s thiruvadi.

El Or em pAvAi – think about this and follow our path.

In this pAsuram, ANdAL says that as they do nOnbu, the whole place will become rich with paddy crops, and other good things would happen for the people. She invokes thrivikraman as having similar characteristics of krishNan, and emphasizes reciting his Names as the sole purpose by itself.